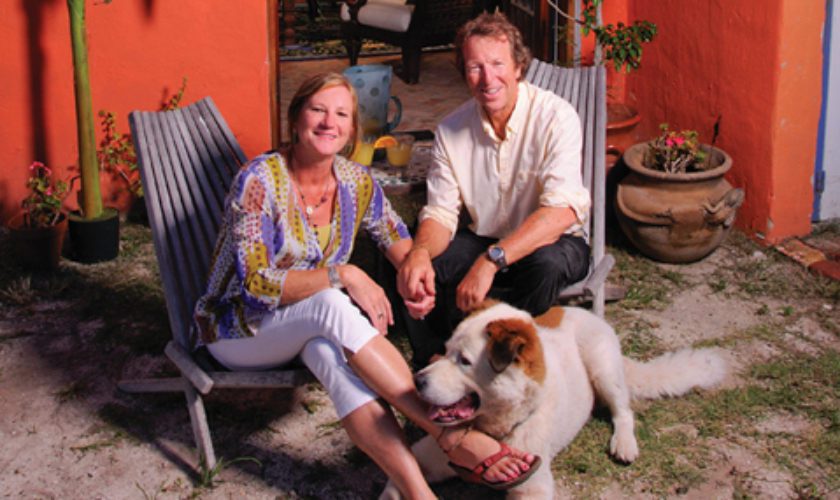 A visit to the town of St. George’s never fails to instill “sea fever.” Even the driest of dry-land sailors can’t help but feel an itch for “the wheel’s kick and the wind’s song and the white sails shaking” once the sheltered town harbour comes into view with its turquoise waters, forest of swaying masts and waterfront wharves that can easily be imagined piled high with cargo from places far and wide.

However, nothing is more redolent of past times than entering the sail loft at 26 Water Street, owned by Steve and Suzanne Hollis. The Ocean Sails loft is housed on the top floor of a stone warehouse, one of two built by John Davenport in the 1830s at the far eastern end of Water Street, before the Convict Bay area was developed. In the 1870s, a ship’s chandlery operated here, a fitting predecessor to the current sail-making concern. And as a colourful reminder of the rich heritage of sailing, trading and ship fitting that the Hollises continue today, one is greeted at the entrance by the loud squawk of a magnificent blue macaw, a descendant perhaps of those exotic birds who so often accompanied sea captains during their months-long voyages.

With its seeming acres of polished wood floors, a ceiling hung with ropes, lines, and a dinghy or two, a gigantic mast lining the wall and huge bundles of rolled sails and hanging finished canvas products, the sail loft itself is fascinating. Even its modern history is distinguished: the Spirit of Bermuda’s sails were made right here. But what’s going on “below decks” is just as interesting. While many merchants live above the shop, few live below it. Steve and Suzanne Hollis are exceptions.

A walk around the front of Ocean Sails and down the slope from the street reveals a nineteenth-century warehousing world unseen by casual passers-by. Three other warehouses create a virtual courtyard that surely saw much activity during Bermuda’s great trading, military and privateering days, but now, apart from a carpentry workshop and the Ocean Sails business, it stands unused and empty. What the Hollises reveal next shows just what huge potential these hidden areas have if developed carefully and imaginatively.

The entrance to the lower level—the Hollis residence—is through a fanciful wrought-iron gate designed by Steve and made by Outerbridge’s Machine Shop. Each of the six windows on both sides of the entrance way boasts a similar wrought-iron treillage, providing not only security but also a whimsical counterpoint to the strict precision and skilled work of the building’s industrial heritage.

Entering the home is like stepping into the captain’s cabin of an old-time schooner; the sea is visible from every window, and furnishings and objects from far-distant ports mingle with more prosaic items. Here, for example, green Chinese lacquered chests, Benares brass light sconces and a Balinese-style coffee table share space with a jolly red wood stove and an enormous dog’s bed. However, furnishing and decorating the space has been only the most recent stage in an 18-month, detailed and sensitive restoration and renovation—a process that began by default.

When the Hollises renovated the upper portion of the building in 2001 for the sail loft, they were happily living nearby in a rental home. Their concept for the lower level was exciting, including a wine and tapas bar and facilities for their transient yachting clientele. However, it was not to be. When these ambitious plans fell through—devastatingly at the time, fortuitously in hindsight—the proverbial penny dropped. Why not make the lower level our own home? they asked each other. Why not, indeed. And thus began a project that would see them bringing the same exacting perfectionism that they bring to their sail making to restoring, renovating and rehabilitating their old stone warehouse.

Their strict design principles are evident in the finished space: maintain or restore the original features where possible, renovate in a compatible manner and build new sympathetically. From original beamed ceiling to new Chicago-brick floor; from original stone architraved windows to new arched wooden doorframes; from old-growth-pine countertops to new pebble-stone shower floor, there is a harmony that rings with integrity.

Renovation of the original warehouse space included subdividing the west side to allow for three bedrooms and two bathrooms and adding transom windows to permit light to enter the living area. (These were designed and made by Suzanne’s brother, Scott Jube, of Nantucket Millworks, as were all the arched doorframes.) An outdoor enclosure and wall to the east were incorporated into the plan with the help of the late Jamie Carswell and Shelly Carswell of Total Home to become a bright and sunny kitchen running parallel to the dining/living area. These additions don’t scream “new”; they have been handled in such a sensitive and compatible way that they seem to naturally belong.

As a potent reminder of how much Steve and Suzanne have accomplished—along with their architect, Terry Bowers, and Darren Hodsoll of Proud Construction—a room at the rear of the home, below the Ocean Sails office, remains in its derelict condition, with crumbling stone walls, piles of rubble and a tangle of pipes and wires and drains.

Steve points out that this is exactly the same sort of “bird’s nest” of wires that electrician Arnie Caines sorted out and the same condition of the floor before Martin Brown of Brown and Co. helped with the arduous task of choosing new stones and brick and laying them. While this room may well be renovated in the future, it remains for now a testament to the creativity and dedication of the Hollises and their team of experts, who became not only as enthusiastic as Steve and Suzanne but also fast friends.

When asked what the most stressful moment of the project was, the couple pauses. Suzanne finally says, “Would having to select the right cupboard knobs count?” These two obviously enjoyed the project and all its decisions, big or small. For some couples, it would be stressful to manage a renovation together, and for many couples it would be a challenge to work together. Steve and Suzanne not only live and work together, they managed their renovation together. They look at each other and laugh. “We wouldn’t have it any other way!” says Suzanne.

When asked what were the happiest moments, Steve is quick to respond. “The best moments were getting the occupancy certificate with the realization that we have, for the most part, finished this project, and then handing over the keys to the landlord, closing the door behind us, and walking to our new home, Low Tide.”