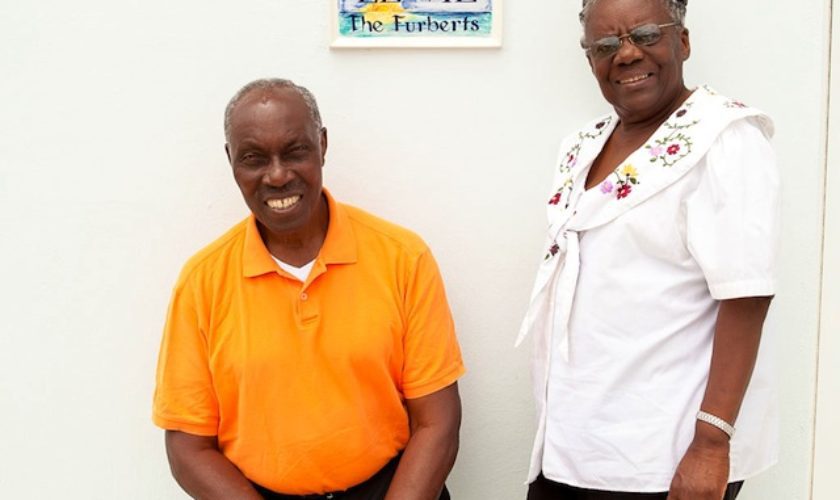 El-Vil, the Home of Dean and Marie Furbert

El-Vil is the name of the Furberts’ cottage, which sits like a treasure box on a rich, green lawn just a few feet from the clear, sparkling ocean. Many years ago, the old railway train ran nearby transporting passengers from one end of the island to the other. Marie warmly welcomes me into her home, where we are joined by Dean in their spacious dining room. Dean, pastor at Crawl Hill Gospel Chapel, named their home El-Vil to reflect a verse from the psalms: “Except the Lord build the house, they labour in vain who build it.” (Psalm 127:1) El meaning “Except the Lord Build “and Vil meaning “Vain is their Labour”. Dean believes this verse has great significance with respect to how we lead our personal lives. He believes strongly that unless God is the centre of our lives and we live to please him, all that we do is in vain.

Dean and Marie Furbert were married 48 years ago in 1965—Dean having found his bride, Marie, in New York, where she was born. The Furberts have three children. Gillian, a mentor teacher, and Jennifer, a lawyer, reside in the US.  Joseph is associate pastor at the Cornerstone Bible Fellowship. Dean and Marie are the proud grandparents of nine grandchildren.

Dean was born into a hard-working family with a deep religious faith. He and his eleven siblings grew up in Cottage Hill, members of a prominent and respected family with a strong work ethic. Dean’s father was an industrious man who kept Dean and his brothers busy farming, fishing and quarrying stone—and his sisters worked equally hard. Later, the Furberts gave their sons a start by purchasing lots for them on the nearby Aubrey Estates in Crawl.

In 1962, Dean saw an advertisement in the newspaper for the sale of lots at Claytown, another nearby estate. Once he had seen this lovely ocean-view property, he prayed that he might be able to make his home there. Subsequently, he sold his lot on the Aubrey Estates to one of his brothers, and since Dean was a young man at the time, his parents offered the family homestead as collateral for him to purchase the property.

The original house was a small old cottage, to which the Furberts added two separate wings with the help of local builders. A third wing was later added by Dean’s brother, Loren. Today, the house has three bedrooms, three bathrooms, dining room, family room, kitchen, office, laundry and garage. The Furberts designed their home with a view to entertaining not only their own family, but their church family and friends as well.

When asked about his favourite room in the house, Dean says he especially appreciates his home office where he studies, prepares his sermons and organises church events, such as Camp Hope, an organisation for young people he helped to found in 1969. Marie likes to sit in her living room lounge chair reading her Kindle or watching television. She also enjoys her garden where she grows a variety of vegetables and the much-sought-after cassava root. The Furberts advise future home owners to learn how to maintain their own home in order to keep expenses down, and to pass on this same work ethic to their children.

Dean and Marie have never considered El-Vil to be theirs alone. They believe that their home was entrusted to them to share God’s love with others, according to the Scriptures: “Except the Lord build a spirit of generosity, then vain is our labour.”