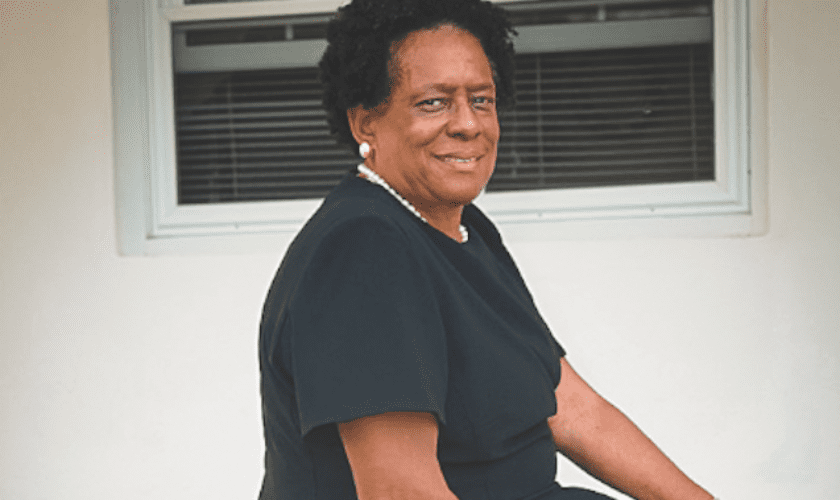 On Time God, the Home of Linda Brangman

The practice of house naming began hundreds of years ago with the English nobility whose manor houses, castles and estates bore traditional family or place names. Gradually, the practice spread to the local gentry and then to the middle classes, tradesmen and merchants. Today the name of a house may be decided by its location or an outstanding feature, have historical significance or derive from sentiment, memories or, simply, inspiration.

On Time God is the name of Linda Brangman’s house, and this is the story about her journey to home-ownership and why she chose such an interesting name.

Entering Linda’s home, I have an immediate sense of warmth, love and peace in the family. Linda’s mom, Mrs. Brangman, her sister Merle and niece Latoya greet me graciously and welcome me inside. I am shown to a cosy front room with a beautiful view of the ocean where Linda and I begin our conversation.

Linda has been working since she was 18 years old. In the 1970s, while still a young woman, she began dreaming of owning her own home, and started investing her money in a local company. During the 1990s the economy changed, so she withdrew her investment and following the advice of a friend, reinvested in another company. A year later this company went bankrupt, and Linda was devastated to learn all of her investment had gone up in smoke. Fortunately she had savings elsewhere, and so despite this setback she was able, at least, to buy Christmas gifts for her family that year!

Sometime later, still without sufficient down payment for a home, Linda arranged to view properties through a real estate agency. The agents kept showing her homes she didn’t like, and she suspected they were aware that she didn’t have the funds for a down payment. Eventually, Linda decided to take a break from viewing properties and, in 1997, began diligently saving again. Her dream continued, despite being told repeatedly that she would never be able to pay for a home on her own. Her brother-in-law encouraged her, however, and she confessed to him that she would purchase a home without a down payment if she had to.

In 2000, on the advice of a friend – but still without enough money for a down payment – Linda agreed to meet with another real estate agent to view properties, and when she noticed that this agent did not focus on financing, she became comfortable with the process. When Linda first looked at her current home she could see only negatives, but when she focused on the positive things about it, she decided to try to go ahead with the purchase. At this time she was working for the Department of Customs and was thrilled when she got approval for a home loan despite not having the usual down payment. Before the loan was finalised there were other obstacles to overcome, of course, but her determination had paid off after all!

Ironically, shortly after Linda purchased her house, real estate values began to climb, and it was during this period that she came up with the name, On Time God, for her new home. She had always believed that if she put her trust in God, he would find her a house – maybe not in her time, but in his time. As Linda can attest, he is an On Time God.

In response to my questions about what she enjoys most about her home, Linda told me she enjoys tending to her outdoor plants and continues the old-time practice of hanging out her laundry on an outdoor clothes line. The feature she likes best about her house is the exposed wooden beams in the ceiling. Her favourite room is her ocean-view living room and her favourite piece of furniture is her remote-controlled Tempur-Pedic bed! Linda’s advice to prospective home owners? Take someone along to view the property – someone who has the expertise to point out any existing faults or deterioration in the house.

Read more from our What’s in a Name? series:
Peppers, the home of Paul and Penne Leseur
El-Vil, the home of Dean and Marie Furbert