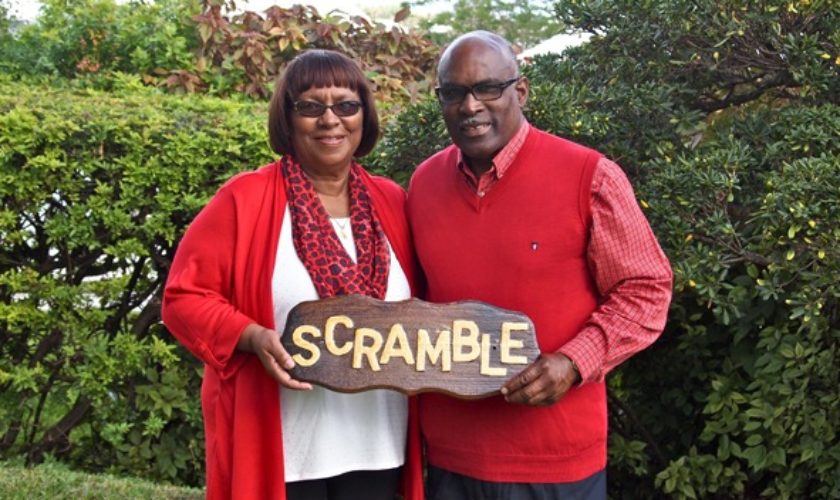 The practice of house naming began hundreds of years ago with the English nobility whose manor houses, castles and estates bore traditional family or place names. Gradually the practice spread to the local gentry and then to the middle classes, tradesmen and merchants. Today the name of a house may be decided by its location or an outstanding feature, have historical significance of derive from sentiment, memories or simply inspiration. Our homes are a very personal part of our lives; they are where we seek comfort and peace from the world, where we spend time with our family and friends, and where we can just be ourselves.

Scramble!   Scramble!  Scramble! This was the word shouted out long ago in every Bermuda neighborhood by the top marbles players at the end of the school summer holidays. The winner would throw his (or her?) winnings high in the air and then watch as dozens of children scrambled eagerly on the ground, and over each other, to collect the precious marbles.

But this was not the reason Marie Gibbons Simons named her home Scramble. Here is her story…

As a teenager, while visiting the homes of family or friends, Marie dreamed of becoming a home owner herself. In 1988, she and her eldest son, Raymond, started seriously looking at houses with real estate agents, but were repeatedly told they did not have the required down payment. The agents all advised Marie to consider purchasing a condo as the overall cost would not be as great, and as it happened, the company her son worked for offered its employees the opportunity to purchase condos at a reasonable price.  But Marie and Raymond both demurred. They wanted a house with its own private yard.

Marie finally got the break they needed when her boss at that time spoke on her behalf to a relative of his, a contractor who built and sold houses. (She still feels deeply indebted to her former boss, who has since passed away—and to his family.) For most of the following year, Marie looked at houses with the contractor and explored potential locations before she settled on the one that would become her home.

The property, which has a distant view of the beautiful south shore, was overgrown with loquat, cherry, fig banana and pawpaw trees, so she had to close her eyes and visualise her home there. Immediately, she knew this was where she wanted to live for the rest of her life. Marie recalls how much she and her children enjoyed watching their new home being built—and in less than six months!

Marie and Raymond were delighted when, a week after the house was built, the contractor and realtor agreed to accept their savings (all the money they had in the world at that time!) as a down payment. So it was a shock when they were informed the following week that they owed additional fees for the lawyer, the conveyance and government stamp duty. Marie recalls how she panicked, and thought, “Oh, no! Money for what? Nobody told me anything about that! How am I going to get this extra money!  I just gave them all the money we had! Now I have to scramble to give them more!”

Finally, she says, through prayer and the grace of God—and the kindness of family and friends who loaned her the money—she was able to pull the additional funds together.  But the family would continue to scramble since they all had to work day and night to pay back the loans and maintain the monthly mortgage. “To scramble” means to struggle eagerly, even frantically, with urgency or panic for possession of something. And Marie thought this perfectly described their situation. Hence, the name of their hard-won home!

Now mortgage-free, Marie smiles warmly as she remembers how supportive, co-operative and positive her son Raymond, then a young man, remained throughout this challenging time in their lives. Then, how blessed she was to meet and marry her wonderful husband of eight years, Malcolm.

The first word that comes to mind when one enters Marie’s home is “cozy,” and that is just what she wants all her guests to feel. Marie has realised her dream and worked hard to achieve it. For forty-five years, she worked at the popular Knick Knack gift shop in Hamilton, which closed in 2003; she has been an usher in one of the local theatres, a Saladmaster demonstrator with Junius Durrant, and has spent five years in sales at Gibbons Company, where she retired. Marie now works part-time as a sales representative in Dockyard.  Malcolm is part owner of Tools & Equipment, and her son Raymond is a data communications analyst and electronics technician.

Marie and Malcolm share seven children, eleven grandchildren and four great-grandchildren. Malcolm’s favorite room is the living room where he commandeers the remote control, watching golf channels. And Marie? Well, she still scrambles out of bed every Sunday morning to lovingly prepare Bermuda’s traditional codfish breakfast for visiting children and grandchildren. Despite her efforts to change the Sunday morning breakfast venue, the children remain steadfast; they’ll meet nowhere else but at Scramble, where they all enjoy laughing and sharing stories of good times.