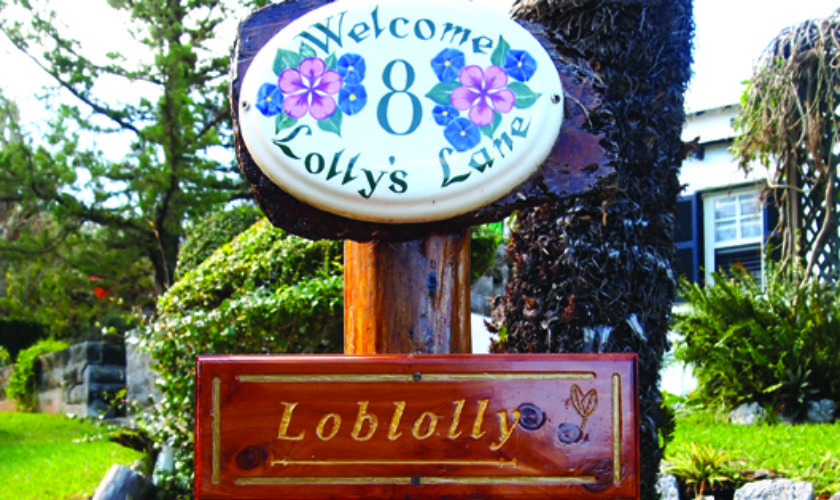 What’s in a Name? The Bartlett’s “Loblolly”

The practice of house naming began hundreds of years ago with the English nobility whose manor houses, castles and estates bore traditional family or place names. Gradually the practice spread to the local gentry and then to the middle classes, tradesmen and merchants. Today the name of a house may be decided by its location or an outstanding feature, have historical significance or derive from sentiment, memories, or simply inspiration. Our homes are a very personal part of our lives; they are where we seek comfort and peace from the world, where we spend time with our family and friends, and where we can just be ourselves.

Feast, festival and controversy surround the history of Loblolly! This old Bermuda home rests on a high hill overlooking Harrington Sound and Flatts Inlet, two of Bermuda’s most iconic inland-water views. The word “loblolly” means a thick gruel or broth. And it was the historical significance of this dialectal word which influenced the eventual naming of the house.

Loblolly, originally named Lestock, is the home of Richard and Beryl Bartlett, who sold their former home in 1983 to purchase the house. Beryl immediately fell in love with the house because it gave her such a good feeling. Richard agreed to the purchase because he felt the asking price would be manageable, and because of his belief in the old adage: “Happy wife, happy life.” They also fondly recall how the owners included their golden retriever, Suzy Tucker, with the sale of the house—as one of the criteria, in fact, for closing the deal with them.

Richard and Beryl were married 42 years ago in 1972. They have two children, 37-year-old Sally Frances Nea, who works as a digital engineer for Sky TV In London, and 33-year-old Richard Alexander, who is HR manager at Ernst & Young. Richard is married to Anita, and they have two children, four-year-old Estelle and 14-month-old Annika. Other family members are two five-year-old schnauzers, Oliver and George.

The Naming of Loblolly

A few years after the purchase of her new home, British-born Beryl’s love for her family, Bermuda and its people evoked a desire to further embrace the culture of her new island home. Believing the way to achieve this was to learn more about Bermuda’s past, she soon made her way to the archives and the Bermuda library to begin researching the genealogy and the early settlement history of her husband’s ancestors, the Friths.

It was during this research that Beryl first discovered the word “loblolly”, in Lefroy’s Memorials of the Bermudas, 1515-1687, written by Sir John Henry Lefroy, former governor of Bermuda from 1871 to 1877. (Prior to his appointment to Bermuda, the apparent highlight of Lefroy’s career was witnessing the exhumation of the body of Emperor Napoleon Bonaparte of France, one of the greatest military leaders the world had seen.) During his term as governor, Lefroy collected and documented the history of Bermuda’s early settlement.

In Memorials, Lefroy describes loblolly as a festival the early settlers held each year in celebration of the church of New England, which they believed was the purest church in the world. The festival drew its name from the feast at which each family tried to outdo the others by taking a common local food (gruel) and making it extraordinary. “Some families,” Lefroy writes, “were forced to sell the feathers of their bedding for milk, butter, and cream to feed them withal and to make their loblolly the more dainty and toothsome.” It was said that families would pinch for two or three months to command the best meal at this one-day Christian feast. Reading Lefroy’s account, Beryl realized that she and Richard were similarly pinching their pennies and making sacrifices to meet their mortgage payments on the home they so cherished. And so there it was: Loblolly would be the new name for their home! Sadly, although clearly an important affair for those early settlers, loblolly became contentious when church ministers, who had initially encouraged the feast, discredited it since the festival was not based on the word of God.

Richard and Beryl are now retired. Richard retired as manager of voice related systems at HSBC, where he began as a teller and was later promoted to the development team in the IT department. From there, Richard headed the implementation of online banking systems for Bermuda’s banks. Beryl retired from nursing, having arrived in Bermuda from England in 1967 as a midwife. In 1974, she became district nurse for the parish communities, and is fondly remembered as a shining light to those she cared for. Recently, she retired once again from P.A.L.S. and the Women’s Clinic.

Now fully retired, Beryl and Richard are enjoying the “feast” that is their home. Richard, once the secretary for the Bermuda Golf Association who escorted Bermuda’s representatives to world championship golf, now loves to breakfast in the den watching the weather radar on TV—for no other reason than his golf game! Beryl loves to spend time with her grandchildren in the living room, where she keeps her treasured photographs and memorabilia, and of course her desk where she continues to research family genealogy.

Their advice to future homeowners: “When you are viewing a potential home, take someone knowledgeable along with you!”