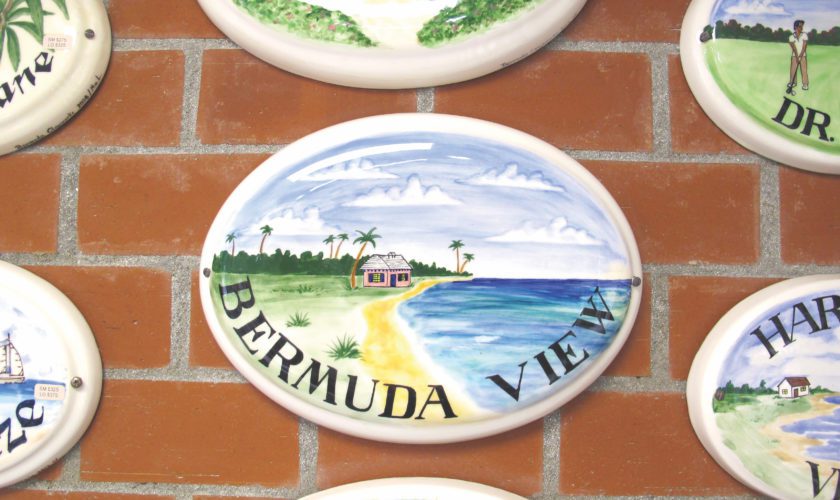 What’s in a Name?

One of the more entertaining things one can do when traveling across Bermuda is to take note of the street names and house signs. In many other countries, streets reflect a country’s heroes and chiefs of state, counties and famous battles or simple routes and attached numbers. Numbered street addresses were introduced in Britain in the 1850s. However, in Bermuda numbered streets and postal addresses were introduced only recently in the 1970s to assist in the delivery of the mail. Up until then, locations, streets and homes were identified by curious events or associations with the residents in the area.

In Bermuda, one is amused with a delightful array of personal experiences and actions that on some distant day seemed so important and are now a source of mirth. Consider the matter of fact nature of Up and Down Lane, Suffering Lane, Pain Lane East and Pain Lane West, Slippery Hill Lane, Fractious Street, Bat ’n Ball Lane, Foot Path Lane, Flat Rock Lane, Pie Crust Place, and Sofar Lane, Narrow Lane and No Name Lane for some immediate examples.

The imprint of Bermuda’s military history is also noted on our roads with Red Coat Lane, Grenadier Lane, Sapper Lane, Barracks Street, Battery Road, Blockade Alley, Fort Hill Road and One Gun Alley. Several military persons of note can be found on the road signs including, Wellington Street, Cochrane Road, Cockburn Road, Craddock Road and Kitchener Road. One could be confused with an address of Khyber Pass (named after the famous pass in Afghanistan) as both St. George’s and Warwick Parishes claim this street as their own.

Bee Hive Drive, Kiskadee Drive, Hogfish Hill, Herons Nest Road, Turtle Bay Lane, Whale Bay Lane and Bluebird Lane are just a few of the many references to the island’s wildlife. Bermuda Atlas & Gazetteer by G. Daniel Blagg is an excellent reference guide to Bermuda’s many roads and lanes and the history behind them.

From the time of the first efforts to colonise the island, buildings were identified for their immediate function or occupants. Residents named their homes for many reasons: some as reminders of homes in other countries, family names or their hopes for the future, and others again in recognition of the natural environment by which they were surrounded.

But ‘n Ben is a particularly interesting name for a home that started out as a small cottage and with renovations and additions over time has developed into one of the islands most recognisable “classic” Bermuda-style homes designed by Wil Onions. “But ‘n ben” is a Scottish architectural term for a simple two-room building: “but” the outer room or public space with kitchen, and “ben” the inner room or private spaces and sleeping chamber.

Whether walking through the parishes or idling along the lanes via motorised transport, take a moment to “smell the roses,” and to read the many wonderful and amusing name signs along the way.