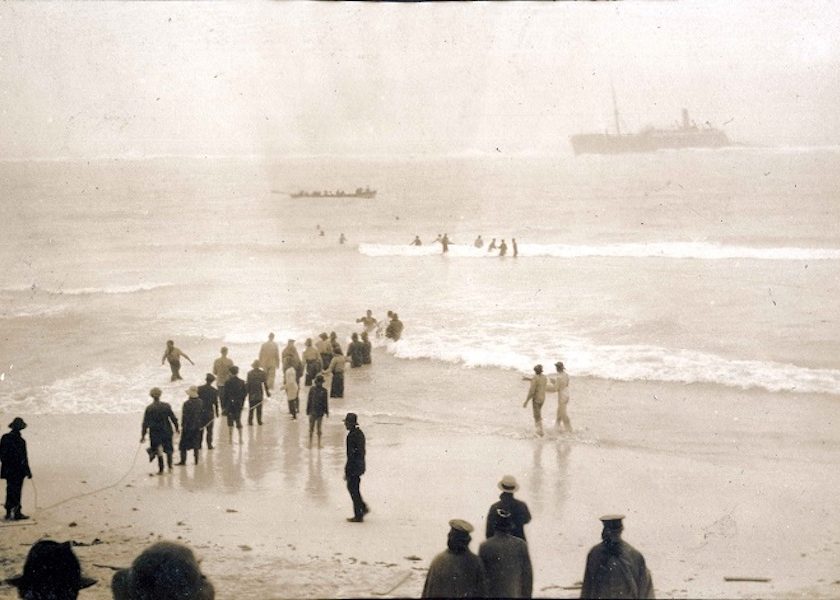 The History of Hurricanes in Bermuda

It’s no secret that Bermuda has a long-standing relationship with hurricanes. In fact, if it weren’t for the hurricane of 1609, the Sea Venture would not have run aground on Bermuda’s reefs and our tiny island would have gone uncolonized.

Although direct hits from hurricanes are rare for Bermuda, our tiny island is situated within Hurricane Alley (the most frequent path taken by Atlantic Hurricanes). Most storms that come close to Bermuda form in the central Atlantic or Western Caribbean Sea before gaining strength and making their way to the island.

According to the Bermuda Weather Service, the islands of Bermuda experience on average one damaging tropical cyclone once every six or seven years, with smaller, lesser systems effecting the island more frequently. Landfalls (with the eye partially or fully going over the island) are rare but not unheard of. According to the Official Atlantic Hurricane Database (started in 1851), only nine landfalls have occurred in Bermuda. In October 2014, hurricanes Fay and Gonzalo both made landfall, making that season the first to produce two landfalls.

A study of recorded storms between 1609 and 1996 found that storms occurring in September and October were more likely to make landfall in Bermuda than storms formed at any other time.

Despite many dealings with major storms, Bermuda tends to fair fairly well. This is because our homes and building are constructed using stone versus wood (after the storm in 1712 destroyed most wooden structures, the decision was made to use stone going forward) making them strong and worthy to fair even the strongest of gusts. As a result, hurricane deaths are uncommon. 129 people have died in Bermuda due to storms: 110 of them were a result of shipwrecks along the south shore in 1926 and 4 people died in 2003’s Hurricane Fabian – the only system in the weather satellite era to cause storm-related deaths in Bermuda. Hurricane Fabian was the most intense storm to impact the island in modern times and though it did not officially make landfall, it is the only storm to have its name retired due to loss of life.

Historically, Bermuda has danced with 186 storms, some being small tropical systems that have kept their distance from our shores, while others have been major and monstrous and have threatened to devastate our island. Fabian (followed closely by Gonzalo) was the costliest storm in Bermuda’s history, with damages estimating $300 million (a cost of $650 million today) – Gonzalo was the cause of between $200 and $400 million in damages.

Timeline of the Most Destructive Storms in Bermuda’s History

1500s
1543 – A Portuguese sailing vessel wrecks upon Bermuda’s reefs in a hurricane. It’s sailors survive for 60 days, during which time they construct a new vessel from the remains of the wrecked one. While on island, they carve their initials into a rock at Spittal Pond Nature Reserve, a historical landmark we call “Portuguese Rock”.

1600s
July 28, 1609 – A hurricane is the cause for the wreck of the Sea Venture, an English ship bound for Jamestown, Virginia. The ship had battled for four days to stay afloat and on the fourth day, Admiral Sir George Somers spotted Bermuda and drives the ship into the reef deliberately to prevent her from sinking. All 150 passengers made it to shore safely.
July 1612 – A hurricane destroys St. Peter’s Church
November 1619 – Two hurricanes strike, sinking at least one ship, uprooting trees, ruining the entire winter corn crop and destroying a wooden watchtower. The two storms leave the island experiencing a food shortage.
August 1629 – The island experiences its most damaging hurricane to date. Crops are destroyed, as are several forts, a prison and the rebuilt watchtower.
October 20, 1639 – Two Spanish ships ground out in a hurricane, the occupants are brought ashore and charged monthly accommodation fees until their departure in February.
August 24, 1669 – One ship is wrecked by a hurricane along the shore of Castle Island. Five men die. Another ship capsizes roughly 20 miles off Ireland Island.
1686 – Government House is left in a state of disrepair after a hurricane batters the island.

1700s
September 8, 1712 – A major hurricane destroys most of the islands churches, highlighting the need to build using limestone versus wood.
1715 – Another major hurricane destroys the rest of the wooden churches left standing after the 1712 hurricane.
1726 – Two hurricanes strike in rapid succession. Many homes and buildings are damaged and the crops are a complete loss. A small supply of gunpowder is also comprised.
October 18, 1780 – The Great Hurricane of 1780 devastates Bermuda. Some 50 ships are driven ashore due to the storm surge and many trees are uprooted. St. George’s is left devastated and a famine and a smallpox epidemic break out.
October 23, 1793 – A violent hurricane passes near Bermuda, leaving “inconceivable” damage in its wake. Every vessel in St. George’s is driven aground and numerous wharves are lost. Most of the 40 or so fish ponds on the north shore of St. David’s (containing 5,000 fish) are destroyed.

1800s
November 4-5, 1800 – A hurricane destroys “every shrub in its direction”. Many vessels are also wrecked ashore. This hurricane underscores Bermuda’s need for a lighthouse and the establishment of a Marine Society to assist families of lost sailors.
August 4-5, 1813 – The war of 1812 between the United States and Great Britain sees St. George’s harbor congested with warships, as well as merchant ships detained in Bermuda. Between August 4th and 5th of 1813, winds increased to 90 mph, ripping ships from their moorings. There were massive collisions between ships and nearly every one of them was washed ashore or wrecked. One person was killed aboard the General Doyle.
September 11-12, 1839 – One of the worst storms to ever effect the island bringing with it an 11-foot storm surge. Boats were lifted from the water and rehomed in field across the south shore, while many fish were also resituated hundreds of yards inland. Many families were forced to flee their homes in the middle of the night and endure the storm outdoors and many water tanks were contaminated with salt water. Despite the extensive damage, no lives were lost. This storm is typically referred to Reid’s Hurricane after Governor William Reid who studied the storm extensively.
September 19-22, 1891 – A category 2 hurricane impacts Bermuda, causing a Spanish brig carrying lumber to wreck along the south shore.
September 12-13, 1899 – A direct hit from a category 3 hurricane greatly effects the island. Residents were preoccupied with the cleanup from a lesser storm that hit a week prior and the category 3 system catches them off guard. St. George’s is cut off from the mainland, Dockyard is severely impacted. Estimated damage is reported to be £100,000.

1900s
September 28, 1903 – A category 2 hurricane with sustained winds of 74 mph causes significant damage. Two fatalities are reported: one man drowns at Ireland Island and another is crushed in St. George’s by a collapsing wall.
September 8-9, 1906 – A major hurricane leaves one man dead after he was blown off Watford Bridge. Another fatality occurred in Hamilton Harbour when a sailboat unsuccessfully took on a severe squall. A fire aboard a ferry threatened to make its way to land but was extinguished.
September 3-8, 1915 – A category 3 hurricane meanders around the island for several days. Enormous waves lead to the wreck of the SS Pollockshields, on the reefs off Elbow Beach. The captain drowns after unsuccessfully attempting to procure a life jacket for a crew member. The wreck of the Pollockshields is shown in the featured image of this article (at the top).
September 4, 1917 – Huge waves and high tides caused by a major hurricane lead to the flooding of the St. George’s Square, including the Town Hall. A large part of Higgs’ Island is swept away.
September 21, 1922 – Bermuda is hit with a category 3 hurricane, bringing with it an 8-foot storm surge and 60-foot waves along the south shore. Many homes and buildings were submerged and some small houses on White’s Island are blown into the water. One fatality is reported after a sailor falls overboard in Dockyard. Estimated damage totals $250,000.
October 22, 1926 – A strong category 3 makes landfall on Bermuda, becoming tied with Hurricane Five of 1899. Sustained winds of 114 mph are recorded. 40% of homes incurred roof damage but only two are demolished. 88 fatalities are reported after the HMS Valerian sinks less than 5 miles from Dockyard. Another ship, the cargo steamer SS Eastway is lost near Bermuda with 22 of her 35 crew drowning.
October 20, 1947 – A category 3 hurricane results in a reported $1 million in damage. In the aftermath of the storm, a Belco lineman is killed after falling from a pole during restoration efforts.
September 13, 1948 – A category 3 storm passes 50 miles to the west, cutting St. George’s off from the mainland. Rainfall totals 5 inches, triggering flooding.
October 7, 1948 – A direct hit from a category 2 storm results in the uprooting of thousands of trees and leaves the entire island without power. Total losses equal $1 million.
September 9, 1951 – Hurricane Easy passes by the island, resulting in one of the strangest phenomena in weather history.
September 17, 1953 – Category 3 Hurricane Edna passes by the island, reeking havoc on boats in Hamilton Harbour. Three people report storm-related injuries.
August 9, 1963 – Hurricane Arlene causes loss of many citrus and avocado trees in Bermuda. In addition to vegetation, Arlene destroys a yacht club in Devonshire, along with every boat homed there.
September 25, 1987 – Unexpected and fast-moving, category 1 Hurricane Emily made landfall early morning, bringing with her destructive winds, waterspouts and tornadoes. Of the 2,500 homes damaged during the storm, 200 report major roof damage. Losses are estimated at $35 million and over 100 people report storm-related injuries.
August 6, 1989 – Category 2 Hurricane Dean his Bermuda, causing damage to 648 buildings and injuring 16 people. A parking lot at the airport is washed out, along with several vehicles that were parked. An estimated $8.9 million in damages is reported.
October 29, 1991 – Hurricane Grace passes by the island severely eroding beaches. Grace contributes to the formation of the 1991 “Perfect Storm”.
August 18, 1995 – Hurricane Felix passes by Bermuda, leaving 18,000 residents without power, and delays the Independence Referendum. 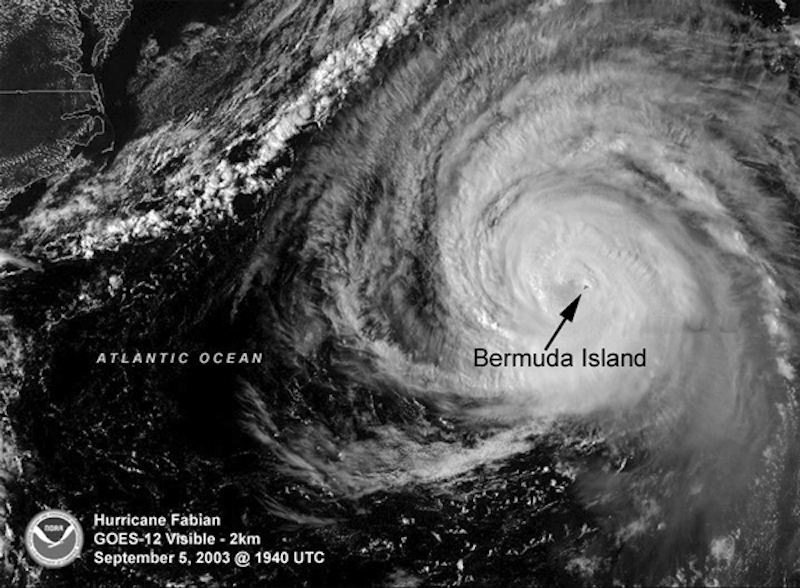 2000s
September 5, 2003 – The island is hit by Hurricane Fabian, a category 3 storm cited as being the most destructive hurricane in Bermuda since 1926. Gusts exceeding 150 mph are recorded with an estimated 10-foot storm surge. Water compromises the Causeway, where four people tragically lose their lives when their vehicles are swept away in the rushing water. Total damages to the island are reported to be $300 million. Fabian is the only tropical cyclone in the weather satellite era to cause direct fatalities. As a result, the name Fabian is retired and replaced with Fred.
September 19–20, 2010 – Category 1 Hurricane Igor was predicted to be the most destructive hurricane in Bermuda’s modern history but thankfully, its destruction was less than expected. Still, 29,000 residents were without power after the storm and damages totaled $500,000.
October 12, 2014 – Category 1 Hurricane Fay surprises the island with an unexpected degree of damage. Wind gusts over 100 mph leave many roadways compromised as well as numerous boats. The airport also suffered flooding. Damage from Fay likely totaled in the tens of millions of dollars.
October 17-18, 2014 – Five days after Hurricane Fay hit Bermuda, category 2 storm, Hurricane Gonzalo made landfall. The hurricane further destroys boats, homes, roadways and cuts off power to tens of thousands of residents. Cited as the most destructive hurricane since Fabian, total estimated damages from Gonzalo were between $200 and $400 million.
October 13, 2016 – Category 3 Hurricane Nicole passes over the island, bringing with her winds as high as 136 mph. Power is cut off to nearly 90% of residents and dozens of boats are damaged. There was a recorded rainfall of 6.77 inches, making Nicole the wettest storm to impact Bermuda.