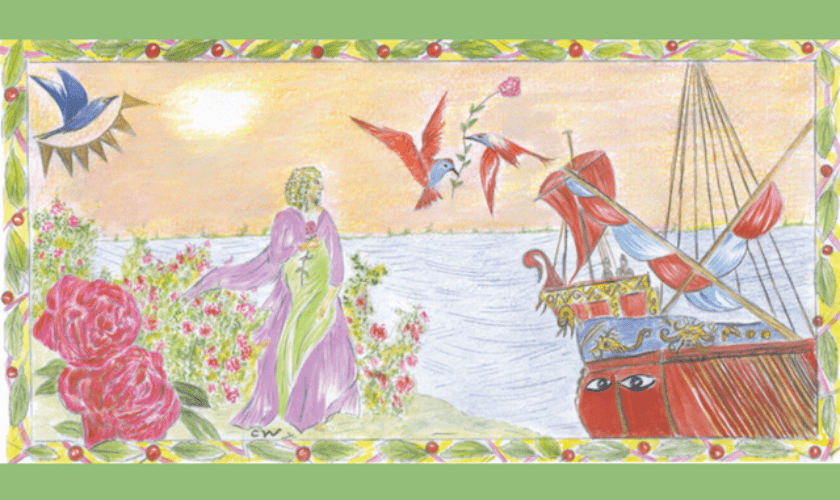 A Rose by Any Other Name…

When I left the UK and had my first Christmas in Bermuda, I knew I had to adjust my thinking. Where decorations were concerned, it could no longer be simply a matter of the holly and the ivy. That said, some people did assure me there was such a thing as Bermuda holly. Indeed, a 1955 edition of the Bermuda Garden Club book The Bermuda Garden mentioned it growing profusely in Devonshire Marsh, but I never saw it there in 1973 and in all the 44 years I’ve been here I’ve never seen it anywhere else. It’s not mentioned in the club’s 2002 Bermuda: A Gardener’s Guide so perhaps it has died out altogether.

Mexican or Brazilian pepper also bears a berry as red as any blood and being the invasive it is, is in no danger of dying out (though last Christmas the berries were few and far between, thanks to Hurricane Nicole). Asparagus fern has red berries, too, complete with prickles as sharp as any thorn, so for the first few years those were the main plants I used to decorate the apartment. However, once we moved into our own house I got converted to the roses and the jonquils, discovering both were growing in our garden and helpfully blooming just in time for Christmas. The jonquil, like the holly, “bears a blossom as white as lily flow’r” and just as perfumed. Over the years, the scents of a Bermuda Christmas have become for me a heady mix of pine, cedar, jonquils and roses.

Among the roses we found growing in our garden is the cramoisi supérieur, otherwise known as the Agrippina rose that is now very common in Bermudian gardens. According to the Bermuda Rose Society’s Roses in Bermuda, it is “almost naturalized all over the island and can be found growing under the most adverse conditions.” Our rose bush bears this out since we have not exactly assiduously paid it attention. It blooms sporadically all year, and without fail, its crimson buds appear a week before Christmas, opening into cupped blossoms with close layers of petals. The heads bend from the stems and it is true that they are not the best roses for cutting since they drop their petals. I ignore this, however, since they look beautiful in the base of an eighteenth-century silver sugar shaker that is otherwise perfectly useless.

Besides, who can complain about a constant stream of fragrant confetti?

The only thing about the rose that bothers me is its name. Now as Shakespeare said, a rose with any other name would smell as sweet, but still, Agrippina is a bit much. The name is apparently Greek and means “born feet first”—not an easy way to start life but that’s not my objection. I don’t understand how this beautiful rose species with its shyly drooping heads bears the name of a scheming, murderous ancient Roman empress, Julia Agrippina the Younger. She not only connived with her tongue, but also probably poisoned an inordinate number of people, including two husbands, Passienus Crispus and Emperor Claudius, not to mention Claudius’s son Brittanicus. I suppose you could say that like the rose she was a survivor but that by her end was not true. She had her comeuppance since her insatiable ambition for her son Nero arguably drove him to murder her. When tricking her to sail in a ship designed to sink didn’t work— she swam to safety—he had her murdered in her own country house.

Not to worry, Google this rose and you’ll find it has a variety of other less-sinister names, including Bengale à pétales striées, Bengale éblouissant, La Gaufrée, and Lady Brisbane. Other countries might have claimed it (originally from China, it was apparently discovered in Europe by 1832), but we too have adopted it for our own, dubbing it the Old Bermuda Red Rose. Now that is a great name for a rose that smells so sweet.