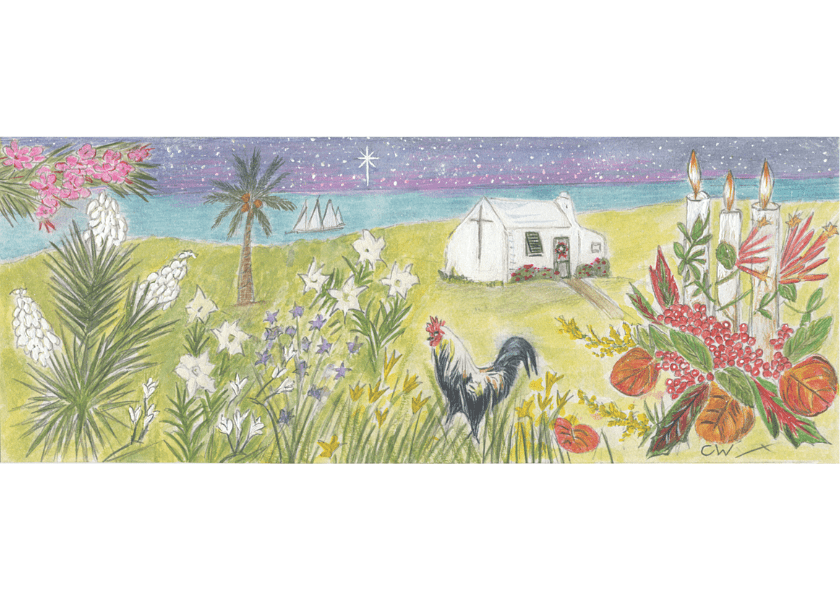 A Year of Abundance

The downside of COVID travel restrictions has meant we have largely been stuck on the rock, missing out on new experiences and different scenery in foreign lands. However, there has also been an upside. Judging from numerous online conversations and photo exchanges on social media of local flowers and animals, many of us have become far more in tune with Bermuda’s natural beauty. More than that, we have been able to appreciate anew long familiar seasonal sights, so easy to take for granted—the freesias carpeting our lawns, for instance, and the fields of Easter lilies, which in many parts of the island did kindly come out just in time for Easter.

I became acutely aware of this in early April when our endemic Bermudianas or Bermuda irises started to bloom. I don’t think Bermudianas have ever been scarce, but I have never seen them in such profusion as they were in 2021. Or so beautiful. At this point, I hesitate to describe their flowers since many Bermudians describe them as purple. Certainly, when in the year 2000 I went to check out the oldest dried specimens in the Sloane herbarium at the British Museum of Natural History, their six petals were a rich, dark purple even though they had been sent by John Dickenson to London as early as 1699. Yet when I looked at the living flowers, they were more of a heavenly blue to me so that Louisa Hutchings Smith’s description of them in Bermuda’s Oldest Inhabitants as “a little blue-eyed grass” was more apposite. I saw swathes of Bermudianas all over the island on roadsides and in parks, but I particularly enjoyed the ones in our own yard, popping up in unexpected places—through the cracks of our concrete steps, for example, or from under stones edging a border, their yellow centres glinting in the sun.

In April another native plant added incongruous autumnal colours to the palette—the bay grape. In spring the bay grape’s leaves always turn yellow to orange to reddish brown. This particular year I was so conscious of the overall effect, especially in the thicket towards the end of the south shore trail that ends on the raised wooden walkway leading down to Horseshoe Bay. There, in the early morning light, the leaves shone from the trees like a shower of copper medallions.

I have to admit I’ve never been a great fan of oleander, especially the more common pink variety. I’ve always found it a tad boring, but last May and June it was yet another flower I looked at with different eyes. I wasn’t the only one either as comments and photos on Facebook testified over and over again. The pink oleanders were actually the most beautiful—their blazing blooms, both single and double, dazzled the eyes, living up to their nineteenth-century name, the South Sea rose. Their fragrance was incredible, too, resembling something like a mix of vanilla and apricot, belying the lethal toxicity of both flowers and leaves. (It’s ironic, I can’t help thinking, the most spectacular were in Death Valley Field and Playground, Southampton.)

Perhaps the biggest eye-opener of the year was the splendour of the Spanish bayonets or yuccas all along the south shore in late June, July. Normally, their dark green, dagger-like leaves aren’t particularly noticeable amongst the rest of the foliage unless you have the misfortune to have a physical encounter with them. Their blossoms are a different matter, however. I thought the avenues of yucca blossom along the south shore in Warwick and Southampton last year were sensational. Close to, you could see their individual white flower bells, tinged with mauve. But from a distance, during the day, the oval spikes were nature’s answer to architectural finials.  And after dark, they glowed like white luminous lamps.

In late September/October, a feast of yellow: seaside golden rod glowing in the sunlight and, unless a hurricane spoils things, the varnish tree’s cones of yellow flowers. Best of all, the yellow Bermuda crocuses, or rain lilies, bursting into waving blossom immediately after a shower of rain. Next, the varnish tree’s brownish-pink seed lanterns and a profusion of red honeysuckle scrambling over hedges.

Finally, by the time you read this, the scarlet berries of the Brazilian peppers and the blazing bracts of the poinsettias will be here just in time for Christmas.