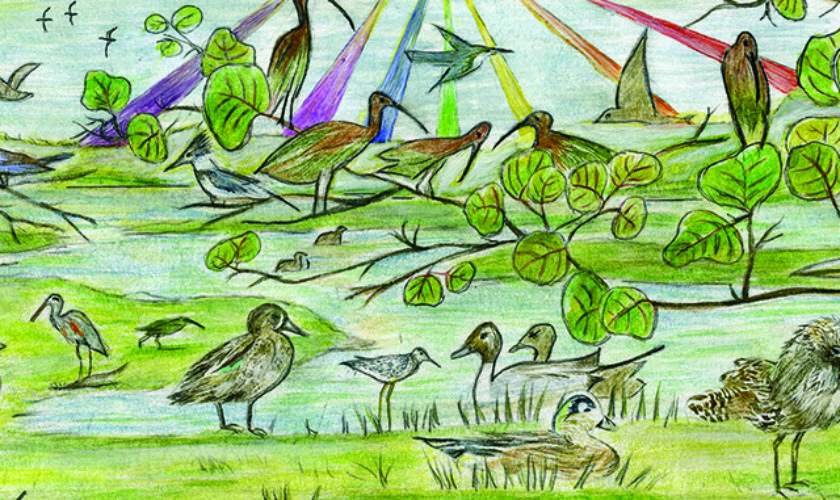 Adventures with the Audobon Experts

When the Bermuda Audubon Society announced a guided visit to Sears Cave in Smith’s Parish last March, Mike and I knew we had to go. We both remembered how one Saturday during the late 1980s we had fruitlessly wandered up, down, and around Sears Cave Road in search of a cave entrance, which we envisioned would be like the one at the eastern end of Blue Hole Park. We just couldn’t find it. This year was our chance.

Joining the throng of people near St Mark’s Church in Smith’s, we were at first surprised to see a tall fence enclosing a wild area, and then very relieved. Once David Wingate opened the lock and led us through, he pointed down to a seemingly bottomless sinkhole not immediately obvious because of the ferns and other foliage surrounding it. Mike and I looked at each other, thinking the same thing. We could easily have found Sears Cave by falling down it. As David explained, it was a cave once but its roof collapsed. When Bermuda Audubon acquired it as a gift commemorating former owners Sir Howard and Lady Trott, they cleared it of all the garbage that had been dumped there, including the skeletons of animals that had fallen in. Now, as Alison Copeland from the Department of Conservation explained, it is an important haven for endangered endemic ferns, such as the one named after Governor Laffan, that have been replanted there. Peering down it, I suddenly thought of the pit of Dothan mentioned in the Bible—the one where Joseph was left before being sold to the Egyptians and which came to symbolise despair. Suddenly, thoughts came to me of all the sadnesses of the last two years—of friends who have lost, or are facing losing, their partners to illness, and of family members and friends who are very ill. Then Alison’s voice in the background drew me into her talk about the incredibly complicated life cycle of a fern.

Later that evening, I thought about how much pleasure and, at times, relief from stress the Bermuda Audubon Society has given us over the 16 years we have belonged to it. Entering the half-hidden world of birds allows us for a little time to escape from too much human reality. Thanks particularly to Andrew Dobson (president of the Bermuda Audubon), Paul Watson and David Wingate who lend us their ears, as well as eyes, we get to see birds we would not normally see even though we visit the same locations while alone. The scopes they set up allow us wonderful close-up views.

Take another Sunday morning last March, for instance. There we were at the eastern end of Spittal Pond with Andrew, Paul and other members of the Audubon Society. During the next two hours, we saw so many different species of birds we wondered whether Andrew had got there earlier and somehow charmed them into arriving at Spittal Pond especially for our enjoyment.

A flock of ducks paddled in the pond and Andrew and Paul identified them for us—blue-winged teals, a northern pintail with his wife, an American widgeon and a pied-billed grebe. The teals took off in a flurry and as their wings stretched we could clearly see the flash of powder blue on their shoulders. It was a bonanza day for herons—a green one, cryptic in the mangroves, a tricoloured, and a great blue that at its immature stage was actually totally white. Several egrets added to the mix, including one in mating mode. Its tail plumage was arced like a beautiful feathered cloak. Two belted kingfishers suddenly swooped down from the sky and streaked across the pond. Shore birds obliged us, too, around peninsulas in the water—a greater yellowlegs and a ruff, a rare visitor to Bermuda apparently. Perhaps the best treat of all was a flock of five glossy ibis (six in total that morning but one was in splendid isolation), their long decurved bills foraging for food. Abruptly they all took off together, their necks extended, their dark beating wings gliding through the misty air.

Had it not been for Andrew and Paul, I would not have noticed the small bird that obligingly posed for us on the path as we returned to the car park. Or if I had, I would have taken it for a sparrow. But when they pointed it out, I could see the moulting blue and brown plumage of an indigo bunting.

This column, then, is a huge thank you not only to Andrew, Paul and David but also to all the members of the Bermuda Audubon Society executive committee who make these magical excursions possible.