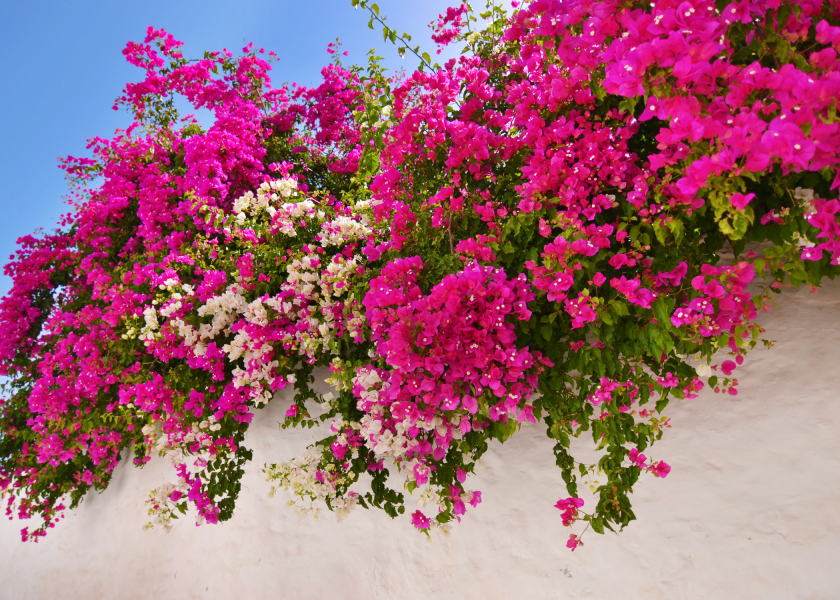 This article was taken from our archives. It first appeared in the winter 2006 issue of The Bermudian. It appears here exactly as it did originally.

Maybe Hurricane Florence wasn’t as vicious as Fabian of 2003 fame. But she did vent her spite on our bougainvillea, leaving it burnt and completely bereft of any foliage. So right now I’m in temporary mourning for all its purple glory that used to tumble over our patio wall and greet us when we got home. Never mind, bougainvillea is a very forgiving plant thriving in the hottest and brownest of soils and I’m sure ours will come bouncing back in no time.

Still, the effects of the hurricane have made me think about the story behind bougainvillea. Where did it actually originate? Brazil is the answer to that. And why does it have its name?  Surely a plant so vibrantly colourful should have a more romantic name than the rather harsh sounding bougainvillea? I’ve discovered the answer to that as well. It’s named after a French admiral, Louis Antoine de Bougainville, who in typical colonial fashion went round the world to acquire “unclaimed” pieces of territory for France. King Louis XV was apparently depressed by French losses to Britain in America and wanted to compensate for them. Enter another depressed Frenchman: botanist Philibert Commerson, who devastated by his wife’s death in child birth, decided to join Bougainville aboard the Boudeuse on an expedition in 1768. He was accompanied by his assistant Jean Baret, and his cat. And thereby hangs a tale, several tales, actually.

In the April of that year the crews of the Boudeuse and the accompanying L’Étoile landed in Tahiti where apparently they were impressed by the Tahitians’ spontaneous, public lovemaking. Several events happened after they arrived. First, some Tahitians fell for Commerson’s cat. They offered to exchange it for their most beautiful maiden. Maybe Commerson was emotionally attached to his cat or maybe he was still in mourning for his wife. Whatever the reason, he refused the offer. Next, Chief Ereti became intrigued with Jean Baret. Why? Because with his discerning eye he noticed that Jean was in fact Jeanne. Whether Commerson knew or not is unclear. Some say he did and that he took her because she had always wanted to go round the world. In France she had been his housekeeper. Others say he most certainly knew and took her as his mistress. (If that was the case, Admiral Bougainville was deceived. He later wrote in his ship’s diary, “I must do her justice to acknowledge that at all time while she was on board ship, she was the model of propriety.”) While still others say Commerson didn’t have a clue. Given he and Baret shared a cabin that seems a tad unlikely although of course Commerson was grief stricken.

In the meantime Commerson and Baret had collected as many as 3,000 plants new to Europe. One of them of course was the vine that Commerson named after his friend. What the Tahitians called it then I’m not sure, but some species today are known as “tiare vareau”, which to my ear sounds more appropriate. It was used (as it is now in Tahiti) for decorating bare walls and for garlands.

Just before they left, other problems occurred. Some Tahitians were shot. Four French sailors were put in irons to appease the Chief. Then the winds came up, threatening to push the French ships onto the reefs – anchors broke, cables snapped. It was time to leave, but not before Chief Ereti had persuaded them to take one of his people, Ahu-toru, with them. Another person who wanted a free round the world cruise? It would be interesting to know how he got on with Jeanne for the rest of the expedition.

But what Ereti probably didn’t know was that before he left, Bougainville had “taken possession” of the island for the French nation by erecting a sign on a tree near the beach and burying a bottle with a message asserting the action. No doubt the Tahitians took down the sign but did they ever find out about the bottle, I wonder. Tahiti didn’t become officially French until over 70 years later.

As for tiare vareau or bougainvillea, it seems it arrived in Bermuda some 106 years after Philibert and Jeanne had discovered it (our purple version, by the way) in Tahiti.

According to Louise Hutchings Smith’s Bermuda’s Oldest Inhabitants, it was brought from Gibraltar either by Governor Laffan or by Henry Dennison and first planted in Bermuda in 1874. Where? In a far more decorous setting altogether: in the grounds of Government House where, one thing’s for sure, public lovemaking was definitely not encouraged.