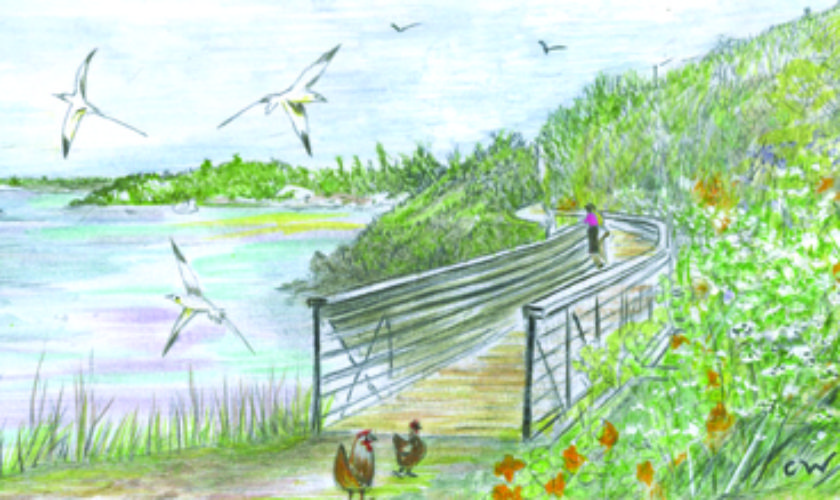 Bridging the Past and Present

I’ve often wished that the Bermuda Railway was still operating in Bermuda. Taking the train ride from Dockyard to Hamilton and then from Hamilton to St. George’s must have been spectacular. Imagine trundling over 33 trestles and bridges spanning the most beautiful expanses of the island’s waters. Actually, Ruth Thomas, former Officer for Cultural Affairs and well known lady of the arts, doesn’t have to imagine it. She remembers travelling on it as a child and writing in an essay while she was a student at the Central School that the train went at “flower picking speed.” So when I read that father and son Mike and Tucker Murphy  and the Friends of the Bermuda Railway Trail had put up a new footbridge where once the Bailey’s Bay Trestle had been, I knew my Mike and I had to walk over it.

One glorious blue morning, we decided to start at the Crawl Hill part of the north shore trail which, thanks to the new bridge, could take us uninterrupted to Coney Island. We crossed the road by the filling station and followed the railway trail sign. The path curled around the shoreline until we reached a layby overlooking the north shore. Looking left, we could see the straight line of pylons stretching west towards Flatts that were so close to some houses they seemed part of their back yards. Once, they supported the Crawl Hill Trestle Bridge. Near the layby a helpful railway notice told us we were standing on what was Crawl Station and gave us an example of some of the railway’s more exciting moments. Once, apparently, a train driver was knocked out of a window as the train was leaving Hamilton, but the engine and trucks carried on without him all the way to St. George’s. How the trucks safely negotiated all those bridges, especially Flatts, doesn’t bear thinking about. Just as it was nearing the St. George’s station, a driver was able to jump aboard and bring it safely to a halt.

We followed the creamy, sandy path past houses on the right and spiky stands of palmetto on the left, arriving at the Crawl Waterfront Park. How well named the park is! I realized when driving through Crawl I’d only seen the north shore in flashes, some longer than others, thanks to the many homes in the area. But following the trail in Crawl allows on the left a perfectly unimpeded view of the water with coves framed by craggy limestone. We looked across the sea of colours, all shades of aquamarine, turquoise and emerald, streaked with the shimmering shadows of reefs and set against a sapphire sky.

The only sounds that morning were the distant roar of an airplane taking off from the airport and the plaintive bleats of longtails swooping round rocky islets in the distance. Not true—we could also hear the water, a different music to the sibilant sounds of the south shore’s surf. Today was so calm the water rang crystal clear notes onto the rocky shore.  On the right side of the trail, in parts, was a high rocky wall, showing how the railway’s engineers had created cuts through the limestone to allow for a level track.

We passed the unpainted stepped chimney of a ruined Bermuda cottage sprouting greenery although the tamarisk and prickly pear shrubbery along the trail still had the battered look last year’s storms had forced upon them. But the panoramic ocean views continually distracted us, even from the sporadic sun bursts of nasturtiums. To the west we could see the curl of Dockyard and to the east the round Martello Tower of Ferry Point Park. And as we walked, we passed the location of the long gone Clay’s Bay Trestle Bridge.

Eventually, the new footbridge came into sight. One part crossed the Winton Way short stretch of shallow water while another ran straight, making a sharp zig- zag in its middle to the Bailey’s Bay end. It was fun to walk along the wooden planks, look over the edge and see the new supports on the old pylons of the Bailey’s Bay Trestle, and the fry, mercurial flecks just beneath the water’s surface. Finally, we got off the bridge and made our way to Bailey’s Bay Wharf, enjoying a view of the bridge’s whole profile. Once at the wharf, we saw a v-shaped frame cut out in the centre of a jagged promontory pointing west. We looked through it and there on the horizon the Spirit of Bermuda was crossing a triangular piece of sea. Back on the bridge we waited for Spirit to glide past the peninsular.  And there it was again, in all its beauty, its four white sails gently swelling in the breeze.