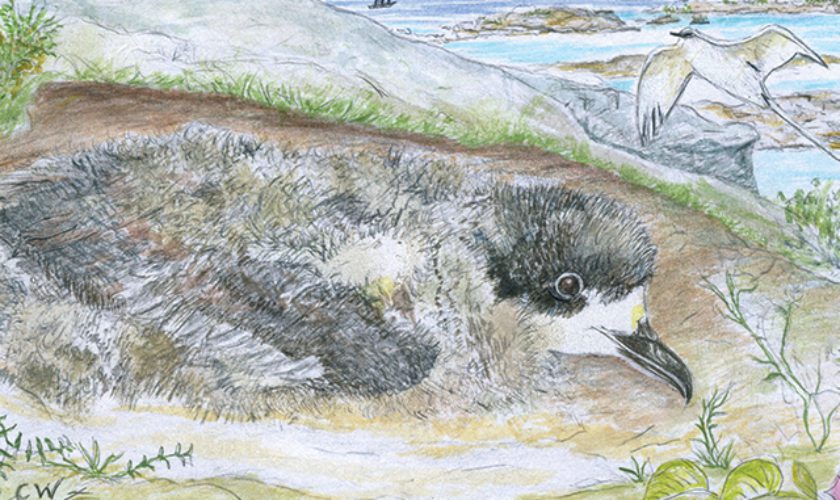 Cahow Do You Do?

It’s not surprising that when we arrived at the dock on Nonsuch Island last May, it was with a feeling of déjà vu because we had been there before—twice. The first time was in 2003 before the hurricane of Fabian fame when David Wingate’s motor boat scudded us over the waves. The second time was with the Audubon Society in November 2008 when we motored in style aboard The Traveler, kind courtesy of her owners, David and Christine Saul. But this visit, I knew, would be different for one crucial reason: Dr. Jeremy Madeiros, present conservation officer, had promised us close encounters with cahow chicks conceived and born on Nonsuch Island. We were to meet the next generation of our national bird: the Bermuda Petrel (Pterodroma cahow).

We again arrived in style, together with Audubon members, this time aboard the Bermudian Escape, thanks to owner and skipper Lawrence Trimingham. (I could get used to yachts.) After finishing the final stretch to the dock in a motor boat, we followed the path and there was the pergola with its so familiar wooden sign: “Welcome to Nonsuch Island.”

The tour was mostly as I remembered it on our two previous visits—the main house, the now much taller canopy of Bermuda olive woods, southern hackberries, cedars, palmetto and foresteria, the ferns and creepers carpeting the forest floor, the seascapes with rocky promontories, the two beaches, and the melancholic graveyard. The island seemed, as it had before, almost untouched by time though ironically it has taken decades to return it to its near original state. Dr. David Wingate, former conservation officer, had started the project in the early 1960s while Jeremy, since he took up his position at the beginning of the twenty-first century, has continued to plant native and endemic trees and shrubs while eliminating as many invasive species as possible. Thanks to their vision and physical work, Nonsuch has become a living museum. Why did both naturalists work so hard to achieve this? Because they believed passionately Nonsuch was the one island that could once again become a haven for Bermuda’s national birds, thus saving them from the likely destruction of their precarious breeding places. In 2004, Jeremy started his Cahow Relocation Programme of taking cahow chicks from tiny outcrops in Castle Harbour and moving them to Nonsuch Island, in the hope that they would be tricked into remembering Nonsuch as their breeding ground and therefore return there as adults to mate and reproduce. I remembered how jubilant David and Jeremy were during our 2008 visit as they explained how the first translocated chicks had indeed returned to Nonsuch and were flying over the island, their cries as eerie as those heard by sailors during the sixteenth century. By January 2009, the first cahow egg was laid in an artificial burrow on Nonsuch and by March it was hatched. Their dream had come true.

As Jeremy showed us during our 2016 excursion the artificial cahow burrows, each made of approximately 600 pounds of concrete, I couldn’t wait to see the chicks. True, I had seen one featured with Jeremy on Ocean Odyssey, a BBC 4 nature programme presented by Stewart McPherson back in April, and had watched several chicks on the Nonsuch Island camcorder. But that’s not the same as a face-to-face meeting.

Keeping his promise, Jeremy eventually brought up several chicks, each at a different stage of development, which he weighed, measured and banded in front of us. (The banding is an important part of the Cahow Recovery Programme as it allows Jeremy to track the chicks and identify them if and when they return. It has also revealed that cahow parents fly hundreds of miles a day to gather food for their chicks.) The first chick had a sharp, shiny hooked black beak protruding from what seemed like a thick dandelion puff ball formed by thousands of downy grey filaments. Its eyes were hidden in the fluff. The second chick’s round dark eyes peered through its maturing white face, the down now retreating to the top of its head while its dark tail feathers were clearly emerging. And the third stretched its powerful curved wings, already much longer than its body. Those wings, Jeremy told us, would eventually grow to three feet, enabling the bird to tirelessly travel thousands of miles throughout the Atlantic for years without touching the ground until hopefully returning to Nonsuch to breed.

In the past I have always associated autumn/winter with the departure of our longtails. But since that May visit to Nonsuch Island, now my thoughts rest on the return of the cahows. As they did to the first settlers, once again they give us a seasonal time beat. Come November they will be flying into Nonsuch.