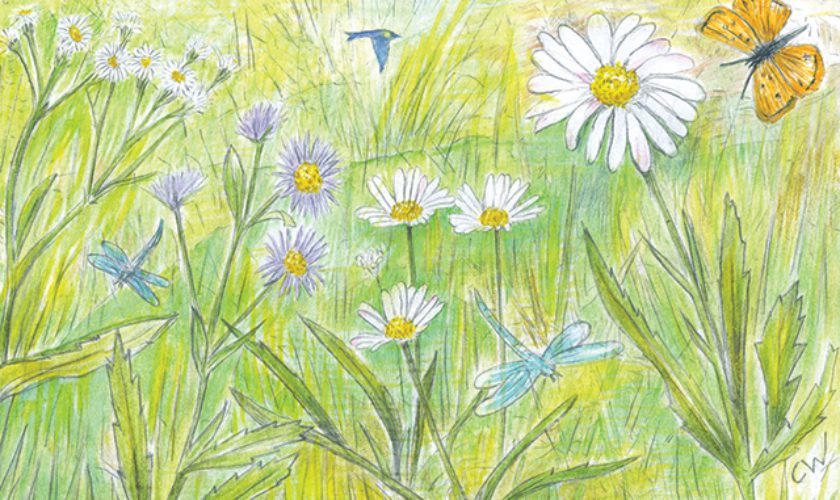 I have to confess that after all these years my home has been in Bermuda, I still miss the wild flowers of my childhood, immortalised in Cicely Mary Barker’s Flower Fairies. Every February and March I have a longing for daffodils, primroses, violets and…daisies. There are, of course, many, many daisy species, but the one I most miss is the common daisy (Bellis perennis), that I would see faithfully beginning to appear singly in our English lawns at the end of the long winter months. I think I remember my mother telling me if there are daisies on the grass close enough together to let you put your foot over them, then summer has arrived. I’ve asked my sister and friends if they remember that saying and they don’t at all. (Do any readers?) But everyone remembers making daisy chains for crowns or bracelets and plucking the “petals” one by one to play the “He loves me, he loves me not” game. And everyone remembers the song “Daisy, Daisy, give me your answer, do” apparently inspired by Edward VII’s mistress, Daisy, Countess of Warwick, but also surely by the “He loves me” game.

The common daisy has a pink blush to its white “petals” which may explain why it’s associated with innocence and purity. Its English name refers to its habit of closing at night and opening in the morning, the “day’s eye” as told in Geoffrey Chaucer’s Legend of a Good Woman:

That wel by by reason men it calle may
The ‘dayeseye’, or elles the ‘ye of day’
The emperice [empress] and floure of floures alle.

Somewhere else he says no “English rhyme or prose/Suffisant this floure to praise aright.”

The Latin name comes from bellus for beautiful but it could also refer to Belides, a nymph in ancient Greece who, as is typical in Greek myth, turns into a plant, in her case a daisy, to escape male attention.

We may not have wild primroses in Bermuda but we definitely have daisies, though not of the common English variety. We have our own endemic Darrell’s fleablane, not common at all, whose flowers are more feathery and miniscule. And we have daisy fleablane, a delicate shade of purple and also tiny. But my favourites in Bermuda are the showier and larger ox-eye daisies, also associated with innocence, that in recent years have become more common escapes on the roadside. When I was a child, I never could understand why people named Margaret could be nicknamed Daisy. It didn’t make any sense to me. That’s because nobody told me the French call these daisies “marguerites,” perhaps after the Greek word margaretes which means “pearl.” (The aforementioned Countess of Warwick wasn’t called Margaret, though—she was Frances Evelyn.) In England, the ox-eyes are also known as herb Margarets.

Several famous Margarets are associated with daisies: St. Margaret, whose piety gave her the doubly appropriate name “Pearl of Scotland”; Margaret, Queen of Navarre; and Margaret of Anjou, wife of Henry VI, who was known for her beauty but also her ruthlessness. Diana Wells in her 100 Flowers and How They Got Their Names rather wittily points out that marguerites have another side, just as Margaret of Anjou did: “In a vase they will make other flowers wilt.” But that Margaret did found Queens’ College in Cambridge, and in this regard has something in common with Margaret, Countess of Richmond, mother of Henry VII, who founded Christ’s College, also part of the University of Cambridge.

Both the English daisy and the marguerite are members of the Compositae family, so called because while they appear to be single flowers, they actually consist of many. The “petals” surrounding the centre are ray flowers while the centres, or heads, contain many disk florets, each with its own stigma, stamens and petals. Daisies, therefore, have huge reproducing powers since the insects they attract can pollinate many flowers at once. For that reason, some people denigrate them as invasives. My sister argues you can tell what gardeners are like from their relationship with daisies. “If you’re a proper one you abhor them. If you’re like me you note with delight how they spring up a few days after you’ve mown the lawn and are glad they exist.” I agree with her and with Wordsworth: “We meet thee like a pleasant thought/When such are wanted.”