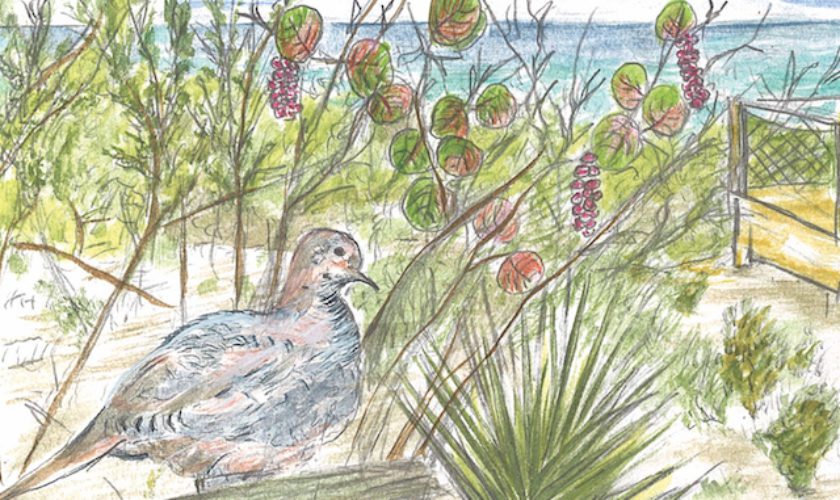 I have to admit to being a conservative where places I love are concerned. Usually I need them to stay exactly the same for my own peace of mind, so that if a new building goes up or an old tree comes down I feel personally affronted. You can imagine my outrage when we came back from abroad to find the access to Horseshoe Bay closed because of renovations. Horseshoe Bay, we were told, was to have a brand new look, at least to its entrance and facilities. I tried not to feel bitter and twisted, especially as we could reach the beach for our daily walk via Warwick Long Bay, but the thought of changes did not make me happy. When the road to the beach reopened, I was sure I would be rude all the way down it.

I was wrong. Early one morning in May, I made the turn from South Road onto the Horseshoe Bay Beach road and gasped. Instead of glimpsing a distant strip of water beyond the trees, the ocean loomed towards me in all its turquoise glory, longtails swooping in and out of sight. Now visitors making the trek down the steep hill have this instant sea view as an incentive to carry them down. Another incentive is the new wooden boardwalk with lookout points and graduated steps and new plantings on either side.

True, trees and shrubs have come down but they were invasives and other flora both native and endemic have gone up instead—stands of Spanish bayonet, Bermuda olivewood trees, cedars and palmettos, to name but a few. The whole construction looked so attractive I couldn’t resist walking down it myself the following day and in doing so had views of the coastline from a different perspective. Before the renovations, both “Baby Beach,” as Port Royal Cove on the western end of Horseshoe Bay has been dubbed for decades, and the Fairmont Southampton beach and facilities to the right of it had been mostly hidden behind scrubby casuarina trees. Now clearly in sight as I started my descent, they made me think of how many changes both natural and architectural Horseshoe Bay has undergone since the 1930s.

Why do I mention the 1930s? Because in the ’30s Horseshoe was not the iconic beach it is today—Elbow Beach and Coral Beach had that status thanks to their hotels. In Bermudiana, published by the Bermuda Publishing Company in 1936, there is an untitled black and white photograph showing Horseshoe Bay completely untouched by any imprint of humanity. Not one person can be seen walking on it, let alone lying under an umbrella in the sun. Unnamed, it is included as one of “the hundreds of sandy bays and coves on Bermuda’s winding shores” which “remain in appearance as virgin and unmarred as they did on that remote day when Bermuda’s discoverer set foot on the Islands.” It is still recognisable by its horseshoe shape and by its rock formations, but on the western end Baby Beach is hidden between the cliff and the cedar-covered hillside.

It was Hurricane Fabian some 77 years later in 2003 that gouged out the cliff, widening the gap and exposing the tiny cove. The bar, restaurant and amenities were not even dreamed about in the 1930s, let alone the Fairmont facilities on the other side of the hill. The Fairmont was of course originally the Southampton Princess, which opened in the early 1970s to great fanfare but also to the horror of those who loved the unspoiled coastline. And as the ’70s slid into the ’80s, Horseshoe became hugely popular thus necessitating the conveniences for the innumerable tourists.

Would I have minded those changes? Much as I love natural scenery, I don’t think so. It seems only fair we make at least one of our south shore beaches hospitable to the public. Besides, I have always enjoyed walking on the beach at different times of the day, watching its moods and observing the obvious pleasure our visitors take in its beauty. The latest changes, I am sure, will only increase their pleasure.

Later there will be more changes again—natural ones. As the new plantings take hold and burgeon, they should form a leafy corridor making the return climb up the hill less sticky. And once again the views will change.