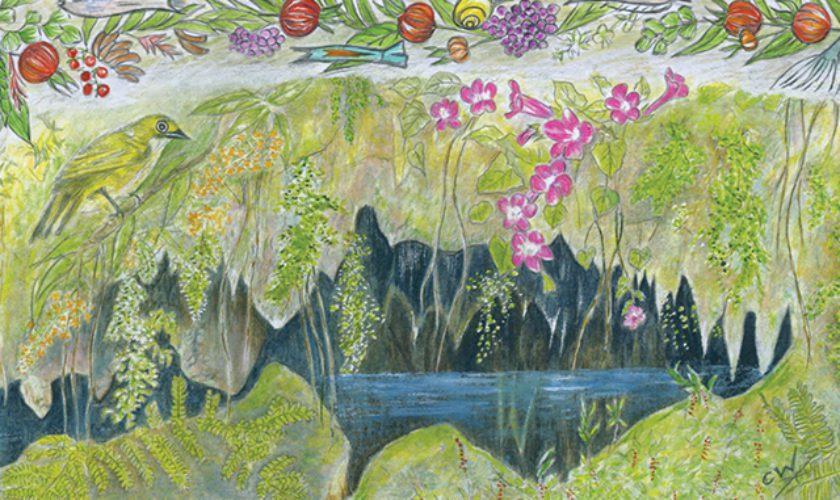 It’s only natural that as parents we want our children to enjoy our own magical childhood experiences. For me, one such experience was freely picking wild primroses, cowslips and violets in an English springtime woodland during the 1950s. For many Bermudians it was, and perhaps still is, swimming in the underwater cave on the edge of Tom Moore’s Jungle or, as it is formally called, the Walsingham Nature Reserve. An early memory I have of Bermuda in the 1970s was being taken by a family on a picnic there and watching the teenage boys jump into the still, deep blue water and disappear into the echoing darkness. I didn’t have the nerve to join them but I totally understood the attraction. I didn’t know, and neither did they, that swimming in that cave could harm endemic flora and fauna, just as I didn’t know picking wild flowers would lead to the near extinction of cowslips and other wild flowers in Britain.

Knowledge about habitats has greatly increased since the 1970s and so has environmental protection. As Jack Ward, president of Bermuda Environmental Consulting Ltd., points out, “The Walsingham area (Coney Island through to Tucker’s Town) is riddled with caves. These are home to most of Bermuda’s critically endangered endemic species… Virtually all of those species, have been recorded from the caves in the Walsingham area. They are all protected under the Protected Species Act 2003.”

According to the Department of Environment and Natural Resources website, our “drowned” caves are home to more endemic species than any other habitat in Bermuda, including at least “84 species of identified invertebrates such as crustaceans (shrimps, pill bugs, etc.), mites, worms and snails.” Therefore, swimming in our caves could threaten these unique species through exposing them to unwanted movement and to contaminants. Ward says, “The effect of turbulence is unknown to me although I do know that some organisms are found only at water mass interfaces and disturbance may affect them in some way.” He also says, “There is some concern over sun blocks on the metabolism of cave fauna. This has been documented with some coral reef organisms and is suspected to affect other invertebrates.” Insect repellents and sprays could also cause damage.

Many people in Bermuda mistakenly believe the land here is public. However, the cave is part of a family trust, the Walsingham Trust, which owns the neighbouring mangrove edged cherry tree thicket and the trail ending at the government-owned Blue Hole Park. The Trust was set up, according to Ward, who is a member, “to ensure public benefit from the land (through conservation and access),” with one of its objectives being to ensure that “any man may pass” over the property. So the Trust’s concern with people swimming in the cave, or any of the other caves, does not mean that they should feel discouraged from visiting. But they should respect the no-swimming signs recently erected and be more consciously considerate of the environment. Lately, trash has been a problem, along with plants being trampled underfoot.

Bermuda’s caves are home to rare, endemic ferns, such as Governor Laffan’s fern, Bermuda shield fern, the more common Bermuda maiden fern, long spleenwort and tooth spleenwort. Other plant species in the surrounding area are also special—the pink flowers of roving sailor (maurandya), for example, and the wild indigo plant whose leaves produce a beautiful blue die. Around the mangroves, by the tidal pool where yellow crowned night herons like to lurk, are clumps of sea ox-eye and marsh samphire. Also found at Walsingham is the endemic wild Bermuda pepper, which according to the Department of the Environment and Natural Resources is critically endangered, as is the wild Bermuda bean. The black mangroves themselves are enchanting with their roots pushing through the mud, while wax myrtle trees like the tidal line and the endemic Bermuda snowberry is good company for the cedars. No wonder birds like this park, a magnetic force every year for migratory birds.

Whenever I used to visit the Walsingham Nature Reserve, I had the pleasurable sensation I was the only one to have accidentally come across it. Of course, lots of other visitors have shared this illusion. For this reason the signs are a shame, a visible reminder the Reserve has long been discovered and is a tourist attraction. But the need for the signs is totally understandable. Pockets of wild in Bermuda are precious and sadly we must be reminded not to squander them by failing to observe nature’s rules of etiquette.