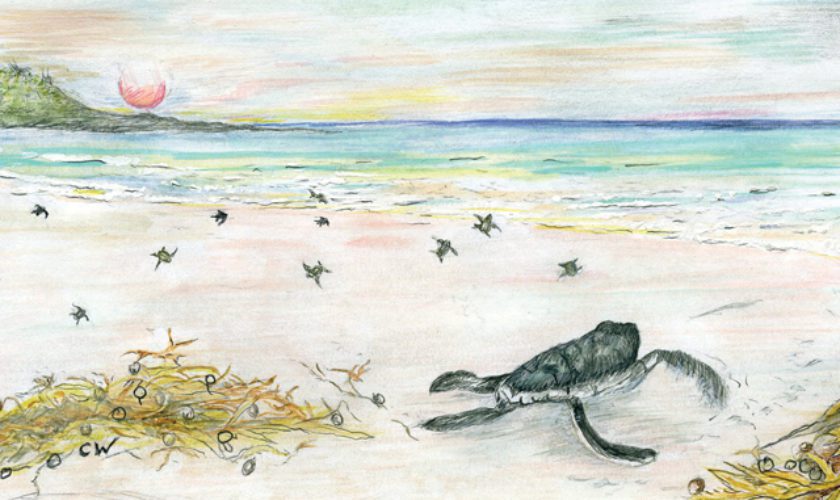 Miracle on the Beach

W. H. Auden’s poem “Musee des Beaux Arts” makes the point that the Old Masters knew that ordinary people were mostly indifferent  to momentous events. And so in Pieter Breughel’s depiction of the fall of Icarus, the boy who flew too close to the sun, the ploughman took no notice and “the expensive delicate ship that must have seen/Something amazing, a boy falling out of the sky,/had somewhere to get to and sailed calmly on.”

In August 2015 something happened that made me wish I were a great artist myself.  But I would like to make an opposite point by painting Frank Burchall driving to his work at the St. George’s Corporation at about five o’clock in the morning, his four-year-old granddaughter accompanying him in his car. Why? Because not only did he witness something amazing, but through his actions made sure everyone else would know about it, too.

As he drove along Barry Road in St. George’s, he saw a creature crossing the street. At first he thought it was a crab and then a terrapin, but after stopping to rescue it—he was worried another vehicle would crush it—he noticed it had flippers and was some kind of sea turtle. He could just have moved it onto the beach at Buildings Bay and thought no more about it. Instead, he took it home and tried to contact the Bermuda Aquarium, Museum and Zoo (BAMZ).  Meanwhile, his granddaughter had given the small turtle a name: Mimi, after herself.

Eventually, Frank put it into a pot and delivered it to BAMZ. At this point, the true significance of what Frank had noticed began to emerge. Noticing its small size, aquarist Ryan Tacklin measured its shell. It was 5.2 centimetres, exactly the size of a newly hatched green turtle. Together with fellow BAMZ staff members, Robin Marirea and Steven Davis, he looked at the creature’s underside, and as Debbie Boyer, secretary of BAMZ, put it in the Bermuda Zoological Society’s publication Wild Tales, “there before their eyes, were the signs of egg scarring and the remains of the egg tooth—additional indications that this little animal had recently hatched!”

Soon there was a furore of activity. BAMZ’s collections officer Lisa Green, along with Robin and Steven, went down to Buildings Bay Beach and saw tracks. Eventually they discovered 12 hatchlings hidden in the vegetation and put them in a bucket of water to protect them from the sun. Then the executive director of the Bermuda National Trust, Jennifer Grey, arrived. She has a special interest in the discovery since she has long been involved with the Bermuda Turtle Project and is now its coordinator. Drs. Peter and Anne Meylan, who head up its scientific programme accompanied her. After recording data about the hatchlings, they released them into the water and watched the baby turtles begin their incredibly challenging journey to the Sargasso Sea. For Jennifer it was, “A moment, an hour, a day, a memory I will treasure for the rest of my life.”

Later, BAMZ staff found the nest and discovered 90 intact eggs out of which 86 had hatched. While a few, like Mimi, went the wrong way, perhaps confused by the lighting, it’s thought most made it safely to the ocean.

Baby turtles are certainly cute but why all this excitement? Because although green turtles, visitors from the Caribbean, can be seen year round in Bermuda, this was the first time in over 100 years that green turtles had hatched from eggs laid on the island. Bermudians’ relationship with turtles has not always been kind—the creatures were hunted for meat and eggs to the point of extinction. About 40 years ago, in an effort to reintroduce a colonising green turtle population to Bermuda, 30,000 eggs were transplanted from Costa Rica to beaches here because female turtles return to their birthplace to lay their eggs. Sixteen thousand hatched. According to Dr. David Wingate, who headed the relocation project, it’s possible that the parent of these current hatchlings was born from one of those relocated eggs. Testing of DNA taken from the four unhatched eggs will determine the truth of this.
Whatever the truth, some of these newborns may be female and therefore could return to lay eggs, whatever their lineage. I like to think that 40 years hence grown up Mimi Burchall will meet the hatchlings of her namesake and remember it was her grandfather who cared enough about a small creature to stop, take action and in doing so alert Bermuda to an event both magical and crucial to conservation.