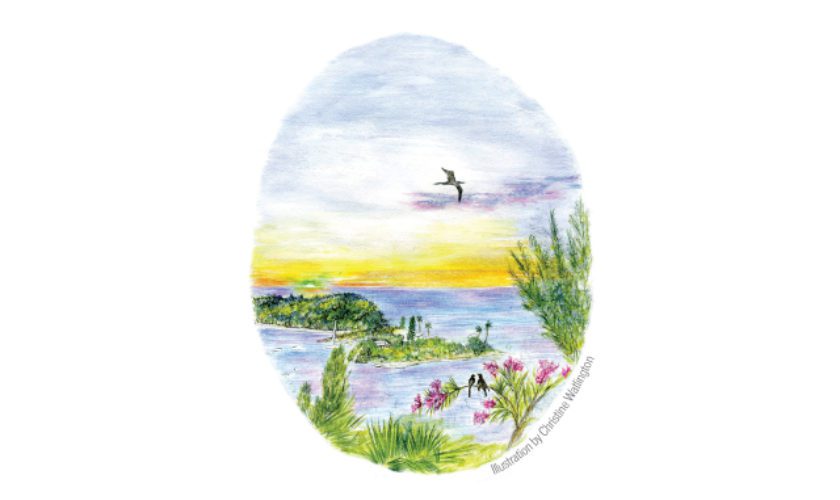 A Flash of Green

Some time ago, I was thinking about how beautiful Bermuda was looking in all its best summer colours when our friends James and Marian invited us to a barbecue in their garden overlooking Ely’s Harbour in Somerset. Though we didn’t realise it when we accepted, that invitation was to introduce us to a colour display we had never before experienced.

Now if there were to be a competition as to which part of Bermuda is the most beautiful, surely Ely’s Harbour would be a very strong contender. When we went to the barbecue, I realised all over again how gorgeous it is. The crenellated coastline, the islets, the play of different lights on limpid waters, the dusky greens of palmetto and casuarina set against a sky blue backdrop – they never fail to make me reach for my camera and try to catch its ever shifting perspectives.

What is also special to the view from James and Marian’s garden is the stretch of uninterrupted horizon beyond the curve of the harbour and the islets. That afternoon we could see the streaks of blue, turquoise and green running parallel to the horizon and as the evening drew near with golden light and a cloudless sky, we knew we were in for a perfect sunset. Then came James’s quiet instruction: “Don’t look directly at the sun, but once it dips below the horizon, look slightly to the right of it and see.” I actually couldn’t hear what he said we might see but that didn’t stop me from anticipating.

As I squinted at the skyline, the burning disc of the sun seemed to take forever to slide into the sea, but once it disappeared, I looked immediately to my right and saw a flash of green. What do I mean by a flash? An explosion of green light across the sky? No. I saw a small minty green rectangle, like the emerald stone of a solitaire ring. It flashed for one second, then disappeared.

Were it not for the fact all the other guests saw it as well, I might have thought I’d imagined it. Could we all have imagined it, thanks to James’s generous servings of wine? Were we suffering from illusion, if not downright delusion? Absolutely not. Green flashes after sunset (and also sunrise) have often been recorded, and according to astronomer Andrew T. Young are definitely real and not illusion at all. They are mirages “due to the dispersion of atmospheric refraction.” For those interested in optics, his web page (https://mintaka.sdsu.edu/GF/bibliog/who.html) gives excellent technical descriptions of all different kinds of green flashes and the reasons for them.

On his Green-flash Fallacies and Misconceptions page, he is also rude about Jules Verne’s novel Le Rayon-Vert which follows the courtship adventures of Scottish heroine Miss Helena Campbell. When asked by her uncles and guardians to consider marriage to the appalling pedant Aristobulus Ursiclos, she announces she will not marry unless she has seen the green ray, which Verne says is “a green which no artist could ever obtain on his palette, a green of which neither the varied tints of vegetation nor the shades of the most limpid sea could ever produce the like! If there is a green in Paradise, it cannot be but of this shade, which most surely is the true green of Hope.”

Why will seeing the green flash help her? Because, Verne says, “At its apparition all deceit and falsehood are done away, and he who has been fortunate enough to behold it is enabled to look closely into his own heart and read the thoughts of others.”

Helena and her uncles go on a green flash quest taking them to my favourite parts of the west coast of Scotland: Oban, Seil, Iona and Staffa. One problem they encounter is finding a horizon unobscured by intervening archipelagos or clouds or ships. In the end, the one time the flash does appear, an “incomparable tint of liquid jade,” she misses it as she flashes loving looks with her true love, Oliver Sinclair, who has opportunely arrived earlier in the book.

James has actually seen the flash several times from his garden, thanks to that section of uninterrupted horizon and unclouded, unpolluted skies. Another friend of mine has seen it at the Fun Golf venue at Snorkel Park in Dockyard. So yet another friend who has wanted to see it for 14 years can take comfort that she doesn’t have to go to Hawaii to see it. On the right day at the right moment, she can see it right here in Bermuda.