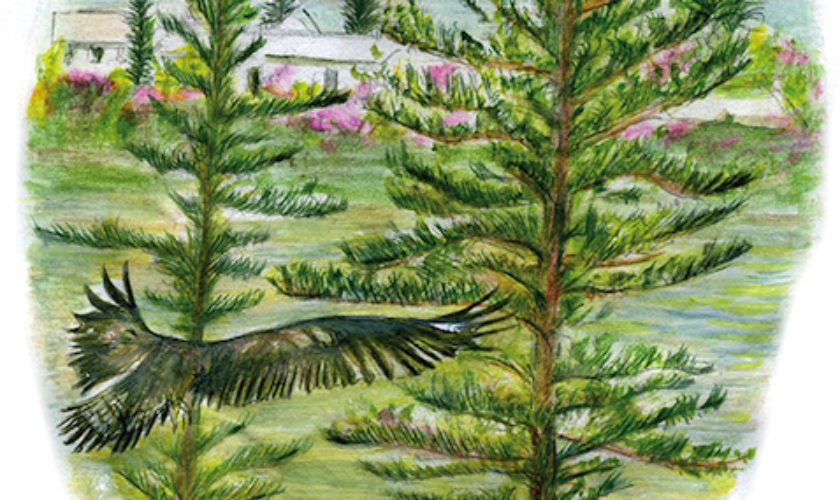 The first Norfolk Island pine I ever saw belonged to Mr. Flint, one of my father’s friends in England. He had it growing in a pot in the corner of his living room and was so inordinately proud of it he gave it as much loving attention as other people give to their dogs. When I was 10 or so, he would bore me senseless with descriptions of how he had to turn it once a week to keep it growing evenly and how a humidifier was essential because it didn’t like central heating.

Watering it, he said, was an art—it was vital to water it at the same time every day. I couldn’t understand why he bothered because I didn’t like the look of it—the leaves looked like glossy plastic to me and the branches so stiff and symmetrical they had to be synthetic. Eventually, the plant hit his ceiling and the big debate was to cut or not to cut. In the end he sold it and started all over again with a new one.

Years later I came to Bermuda and forgot all about Mr. Flint’s pet plant until one day I visited Mike’s artistic Aunt Pink who had her easel and paints out.

“The post office has asked me to paint a Norfolk pine for one of their new stamps,” she explained.

“Why,” I asked, “would they want a stamp with a house plant on it?”

She thought this very funny and when we went on a drive together she pointed out the Norfolk Island pine trees that dot our island. I was amazed—most of them seemed at least 80 feet tall and I had a vision of Mr. Flint’s tree shooting through his roof up to the heavens. I still didn’t appreciate them, though. True, they add height to our fairly low-lying landscape but many are so spindly. And thanks to 2003’s Hurricane Fabian, they have subsequently acquired a lopsided stance without the symmetry Mr. Flint admired. The fierce winds whipped off their branches on one side. Since then the branches have regrown but they have the air of younger siblings trying to catch up.

Norfolk Island pines have not always been in Bermuda. They arrived in the latter half of the nineteenth century when Governor Lefroy was busy importing different pines into the island. According to Nathaniel Lord Britton’s Flora of Bermuda, the Norfolk pine was his greatest success: Britton describes it in 1918 as “the most luxuriant coniferous evergreen tree that has been introduced into Bermuda and there are now many fine specimens on lawns; some of them are 45 feet or more.”

In fact, these trees are not true pines at all although they are coniferous. They were first noticed on Norfolk Island, Australia, in 1774 by Captain James Cook, who took one look at their trunks and noticed they were at least the size of the mast on his ship, the Resolution. As Robert Hughes explains in his The Fatal Shore, in the eighteenth century “pine and flax had the naval importance that oil and uranium hold today.” When the British had a desperate need for both they thought of Cook’s observation. The trunks could make masts and yards, or spars, for ships and the trees’ sap would keep them supple, while the flax, also on the island, could be used to make canvas for sails. Off went shiploads of convicts to Norfolk Island—and sure enough there were the trees splendidly tall and symmetrical growing right to the face of the cliff. But alas, the wood was useless for ships. It did not have enough resin and to quote Hughes, “it snapped like a carrot.”

The leaves are sappy, though, as I found out the other day when I picked a sprig and a white substance stuck to my fingertips. It’s actually a mistake to touch the leaves without gloves. Some people, I later found out, are allergic and come out in a hideous rash. Fortunately, I’m not one of them.

I’m still not enamoured with the Norfolk Island pine. It’s sobering to think on how many people died from starvation and disease thanks to an imperial dream of forests of masts. But would we be better off without these trees? Maybe not. At least they’re natural skyscrapers and as Andrew Dobson, president of the Bermuda Audubon Society, says, “Norfolk Island pines are useful roosting perches for visiting ospreys and merlins.”