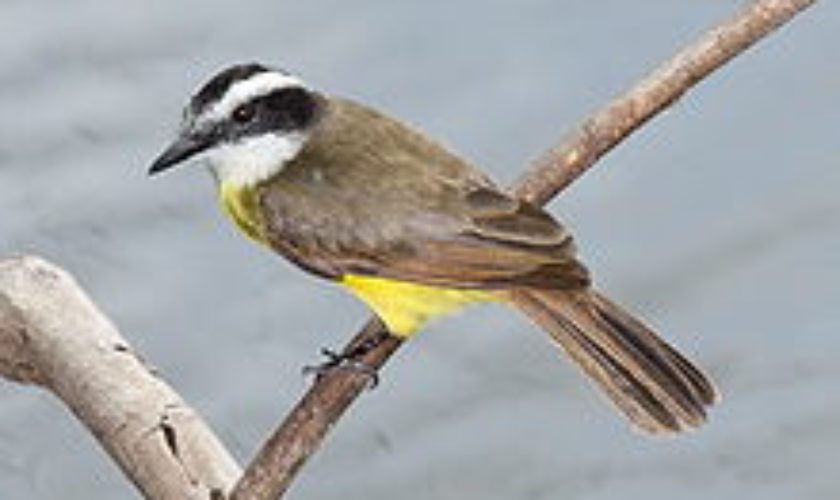 Tourists coming to Bermuda from Europe love kiskadees. I think it’s because they are so easy to see, but they don’t look as if they are.

I remember clearly when I saw my first kiskadee. I was on holiday in Bermuda, reading To Kill a Mockingbird in a lovely Pembroke garden, would you believe. I heard that distinctive call, looked up and there he was, perched on a branch. I had never seen such a colourful contrast of rufous brown and bright sulphurous yellow. His black-and-white-striped head particularly appealed to me. It gave him a distinctly raffish air. But he didn’t look common; he looked exotic and rare, and I felt as if I had seen a very special bird.

It was Mike who told me it was a great kiskadee, its onomatopoeic common name reflecting the bird’s repetitive cry. In French-speaking countries, he explained, people hear Qu’est-ce qu’il dit instead. But he kindly didn’t point out that the kiskadee in Bermuda is no rarer than the starling. I found that out for myself when I came to Bermuda to marry him and live. Kiskadees soon lost their novelty.

Some years ago, we went to New Orleans and went on a bird-watching trip in a Louisiana bayou. The woman greeting us at the reception desk was most upset.

We had to laugh.

Usually, though, we go on holiday to see family in England, and I’m always struck by the absence of the kiskadee; we get blackbird singing in the dead of night instead. In Bermuda, the kiskadee’s call is so frequent. How many times a day do we hear it? Hundreds?

When in January this year we went on vacation in a different direction—to South America—and found ourselves in parkland outside an art museum in Uruguay, I thought I was hallucinating. “Kiskadee!” I heard. “Kiskadee!”

As he pointed out, we shouldn’t have been surprised. Charles Darwin mentions the kiskadee in The Voyage of the Beagle in the chapter “Maldonado,” which, of course, is in Uruguay. Unlike many Bermudians these days, he appreciated its call, which he dubbed “… a rather agreeable cry, which somehow resembles articulate words: the Spaniards say it is like the words “Bien te veo” (I see you well) and accordingly have given it this name.”

Kiskadees in Bermuda are so ubiquitous you can be forgiven for thinking they have been here since the beginning of time, but that is not true. They came to Bermuda as recently as the spring of 1957, when President Eisenhower and Prime Minister Harold Macmillan held their Big Two Conference at the Mid Ocean Club. The two leaders talked of many things, including Khrushchev’s communist tyranny in Eastern European countries and insurrection in Cuba.

Meanwhile, Bermudians were worried about warfare of a different sort. They needed to combat oleander green shield scale. Apparently, Jamaica anole lizards were eating the beetles that ate the insects attacking the oleander. Kiskadees, said Dr. F. J. Jack Simmons of the Commonwealth Institute of Biological Control, would solve the problem because they would eat the lizards. Consequently, starting in March and continuing into August some 200 kiskadees were brought from Trinidad and released near the aquarium and the agricultural station. In November, David Wingate noted in the Agricultural and Fishery Bulletin that the kiskadees seemed to prefer cicadas to lizards, but he wasn’t sure whether they would be able to survive “Bermuda’s relatively severe winter weather and scarcity of large insect life.” Ironically, he also wasn’t sure whether they would breed successfully.

Now, thousands of kiskadees later, he has every reason to regret they were ever brought here. The problem is they have no rivals or predators in Bermuda, which explains the density of their population and their hectoring manners. The other problem is they have eclectic appetites. They devour fry and other pond life, not to mention our endemic skinks, which they seem to prefer to the lizards they were brought in to control. Why didn’t Mr. Simmons think of that?

As for the cicadas, they were wiped out and soon will be beyond living memory. Which makes me think that one of the kiskadee’s Latin names—tyrannus sulphuratus—is apposite. A tyrant from hell? Well, kiskadees have certainly lasted longer than Khrushchev.