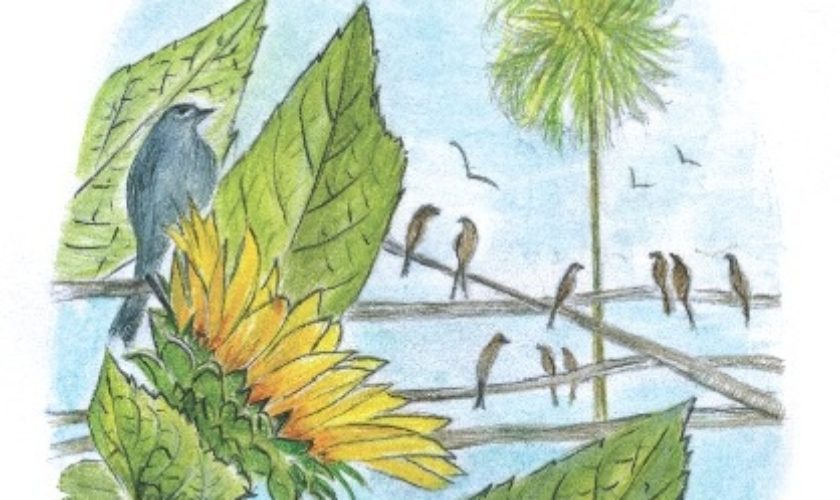 Now that summer’s here I think of sunflowers I saw once in southern France, fields and fields of them, their heads nodding in the breeze. And then I think of Arles, Vincent van Gogh and all his vibrant, tactile yellows made possible because of newly invented pigments, such as chrome yellow. The other day I bought a bunch of sunflowers from Amaral’s farm stand, stuck them in a bright blue jug we bought years ago in the south of France, and taking in their rich yellow fringes and chestnut florets, had a long and satisfying Van Gogh moment. But looking at one of the heads, its petals slightly droopier than the others, a shock of memory shot through me—the involuntary Proustian kind that takes you instantly back to your earliest days. Back in childhood I was, but I just couldn’t remember what I was remembering.

The gap nagged at me until three o’clock the following morning when I woke to total recall—Bill and Ben: Flower Pot Men, a 1950s English television series for children. It featured puppets made out of flowerpots who spoke Oddle Poddle, a gobbledygook, and Little Weed, a wimpy sunflower who whined “Weeeed” from time to time to warn the flowerpot men the dreaded gardener was coming back from lunch. I googled the show on You Tube and couldn’t believe the BBC had the nerve to present it; it’s so excruciatingly twee. Apparently, the series was criticised at the time for promoting immaturity. No wonder I feel young for my age.

Of course there’s nothing wimpy about a real sunflower, either in colour or texture, as Van Gogh well knew, and yet…it does, in European culture, have a wimpy reputation thanks to its apparent habit of perpetually turning towards the sun. Its botanical name Helianthus comes from the Greek helios which means ‘sun’ and anthos which means ‘flower.’ According to Greek mythology, Clytie, a water nymph, loved Helius, the Sun god, but he preferred her sister. In a fit of jealousy, Clytie reported the affair to their father, King Orchamus of Persia, who then buried her sister alive as a punishment. Naturally, Helius now hated Clytie, and as a result she pined away, becoming a sunflower whose head turns to follow the sun each day. However, it can’t have been the sunflower we know today since that species originated in North America about 3000 BC—it’s more likely to have been a heliotrope.

But other artists and poets played with the real sunflower, most notably William Blake who used it as a symbol for futile continual aspiration:

Who countest the steps of the Sun:

Seeking after that sweet golden clime

Where the travellers journey is done.

Where the Youth pined away with desire,

And the pale Virgin shrouded in snow:

Arise from their graves and aspire,

Where my Sun-flower wishes to go.

In contrast, Anthony van Dyck, in his seventeenth-century self-portrait, used a sunflower to denote successful aspiration. The gold chain he holds towards the viewer in the painting was a gift from Charles I of England who appointed him principal painter at court. And the sunflower he points to symbolises the relationship between subject and monarch. Just as a sunflower was supposed to turn to the sun for light, so the subject should turn to the monarch.

Sunflowers had certainly arrived in England from America by the sixteenth century. As I look at my sunflowers, I appreciate the botanist John Gerard’s description of the ones he grew in his London garden. He describes the middle of a sunflower “as it were of unshorn velvet, or some curious cloath wrought with the needle…” and the seeds “set as though a cunning workman had placed them in very good order, much like the honycombs of Bees.” The “very good order” is much appreciated by mathematicians, less inclined to worry about pining nymphs. The florets are always in a spiral pattern with each floret oriented towards the next by the golden angle of 137.5 degrees. As I look closely, I can see a pattern of interconnecting spirals, going in left and right directions. That pattern apparently makes for the more efficient packing of seeds, so it’s practical as well as beautiful.

The BBC, by the way, actually started a second Bill and Ben show in 2001. The new Weed is a proper sunflower, more earth mother than weed. She doesn’t whine—she speaks proper English. What a relief.