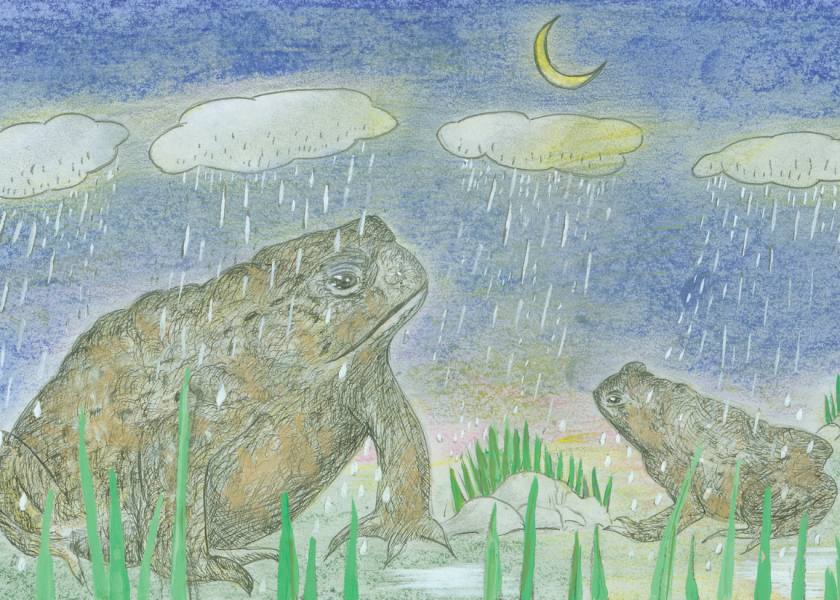 This article was taken from our archives. It first appeared in the Fall 2007 issue of The Bermudian. It appears here exactly as it did originally.

People, I have noticed, are rarely indifferent to our toads: they either love them or loathe them. I’ll ever remember the time a waitress was so petrified when a toad dared to join guests dining alfresco that she dropped her stack of plates and ran into the hotel screaming her head off. Several friends of mine have similar reactions. “The skin of a toad looks so slimy, it’s disgusting,” one says. Of course, it’s not slimy at all—in contrast to most frogs, toads have a dry, warty skin. But they do secrete poison, and they do love wet places, which may add to the slimy illusion.

On the whole, I fall into the other category of people. I tend to be a toad watcher, although I do draw the line when they decide to take over some of our plant pots by sprawling on our impatiens or violas. And I wish they weren’t fond of munching monarch caterpillars. But I’m certainly not repelled by their appearance. On the contrary, I like the contemplative expression of their faces—it seems so accepting of life’s vicissitudes, even in the face of utter disaster, as in the case of toad on the road.

There was a time when toads were the major victims of road fatalities, not just in Bermuda but in other countries as well. That’s because, impervious to the dangers of motor cars, they took their own sweet time crossing roads to reach their breeding ponds. As a result, squashed toads were a common sight. In the U.K., wildlife enthusiasts have helped this problem by putting up toad signs and forming toad patrols, which collect the toads in buckets at night and take them directly to the lakes. In some places, lakeside roads are closed from February through April to save thousands of toads. Somehow I don’t think the idea of closing South Road to save toads would quite work in Bermuda.

But toad traffic deaths here have been on the decline, thanks not to road-toad saviours but to a worrying decline in toad numbers. There are two reasons for this. First, the night herons, brought in to eat the land crabs that plagued our golf courses, are running out of crabs and looking to young toads for a change of menu. (Young toads are not so toxic, because their poison glands are not fully developed). Second, chemicals, pesticides and pollutants seeping into ponds have caused a worrying increase in malformed toads and toadlets. Dr. Jamie Bacon, who heads up the Bermuda Amphibian Research Project conducted by the Bermuda Aquarium, Museum and Zoo as part of their Biodiversity Project, explains that the incidence of toad deformities is high for the seventh year in a row. In addition, toads are not reproducing at their normal rates.

So what? people suffering from bufonophobia (excessive fear of toads) might ask. Who needs them anyway? We do, because they rid us of unwanted pests, such as the ubiquitous mosquito, which also likes water. According to Japanese myth, a toad could clear a room of mosquitoes in a single breath. So it’s ironic a creature that allows us to avoid using pesticides is in part being hurt by pesticides. Besides, the implications of the project’s findings are worrying for other creatures, such as our endemic killifish, not to mention humans. After all, much of our water derives from fresh-water lenses.

Is it all doom and disaster? No, according to Dr. Bacon. The work recently done to Pitman’s Pond—purchased by the National Trust and Audubon Society—has paid off. The pond was dredged and enlarged, red terrapins (omnivorous invasives) were removed and new endemic and native trees were planted. When she went to the Somerset Long Bay Nature Reserve to check out the toadlets, she found the number of those deformed was down to 5 percent. And when I went the other day, I was amazed to find dozens of baby toads hopping along the pathways. Then I remembered an African proverb: “A toad does not run in the daytime for nothing.” Maybe they were jumping for joy.