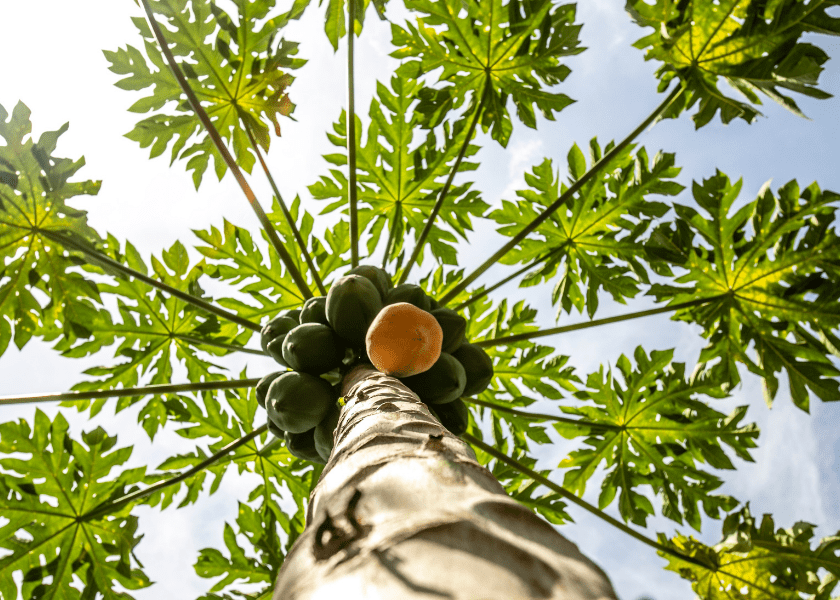 I’ve never planted a pawpaw tree (Carica papaya) in my life.  There was never a reason to do so. After all, when we bought our house, it came with a pawpaw tree complete with fruit. Once that one died, another two plants, male and female, miraculously appeared in its place. For a couple of years, we could depend on the female tree to provide us with regular supplies of papaya until it died. But after that, we thought we’d have no more fruit as nothing sprouted in her place. Happily, one day we discovered another fruit-bearing pawpaw in a completely different area of the garden. How it got there I’m not sure, although it’s probable a bird flying over kindly dropped a seed for our convenience. Pawpaws have come and gone ever since.

How the tree got to Bermuda in the first place is also uncertain. The pawpaw or papaya (also known as papah, papau) is native to South America and the Caribbean and was probably first cultivated in Mexico. When the Spanish invaders arrived in South America, they called it “fruit of the angels” because of its paradisiacal taste. In Bermuda, Henry May noticed it when he was shipwrecked here in 1593, some years before the wreck of the Sea Venture and before the island was permanently settled. In his account of his adventures, he described the fruit as a “melon” though he makes no mention of tasting it. It’s likely the plant was left by another shipwrecked party or came in with the tide or birds. In 1616, Governor Daniel Tucker sent the Edwin to the West Indies to import cuttings, seed and plants to Bermuda. The pawpaw was included; it was also included in the chest of crop gifts sent to Virginia in 1621. By 1645 it was so associated with Bermuda that poet Edmund Waller mentions it in his poem “The Battell of the Summer Islands” (a battle between two whales). He, by the way, never saw it in Bermuda as he never visited.

“There a small graine in some few months will be
A firme, a lofty, and a spacious tree:
The Parmachristi, and the fair Papah,
Now but a seed (preventing natures law)
In halfe the circle of the hasty year
Project a shade, and lovely fruit doe wear:”

By 1829 Suzette Harriet Lloyd most certainly did see it and described the “papau” as “A very singular looking tree,” which “at first sight resembles a palm; it attains a height of about 15 feet and has a soft and curiously tattooed trunk or stem.”

She doesn’t say so, but it is a very useful fruit tree to have in your garden. Picked green, the fruit can be chopped as a vegetable and put in a stew. Not only does it have its own taste it also acts as a meat tenderizer. (The leaves wrapped around meat tenderise it as well). A favourite casserole dish is pawpaw Montespan made of ground beef, tomatoes, onions and chopped pawpaw topped with cheese and breadcrumbs. Apparently, this dish may have been named after Montespan Lodge in Warwick. (It’s intriguing but perhaps insignificant that a voluptuous and dangerous Madame Montespan became Louis XIV’s mistress in 1666.)

Fully ripe, (in Bermuda that means yellow) the pawpaw can be eaten raw like a melon and made into ice creams, sorbets and smoothies. Or it can be used in a chutney. As Kuni Frith-Black explains in Bermudian Remedies, all parts of the pawpaw have amazing medicinal properties. Here are a few. As a vegetable, it helps to reduce blood pressure and prevent inflammation. As a poultice, its green skin can help skin disorders such as boils. The seeds are peppery and “were used to purge worms from the body.” The pawpaw also releases milk when its skin is scratched. This a latex which generates the enzyme papain that helps the digestion and cleanses wounds. There’s a fun Filipino legend about pawpaws, perhaps inspired by their breast-like shape and nutrients. Bantawan is the lazy husband of folklore, while wife Papay does all the rice ploughing and harvesting. After they have a baby, he refuses to work. Facing starvation, she leaves him asleep with the newborn and works in the fields. She never returns, so a search party goes out. Later, a male searcher has a dream about a strange lone tree in a field. “I am the missing mother,” the tree says. “My baby will live if you let her eat my fruit.” Told of this dream, sure enough, the neighbours find in a field just one unfamiliar tree, heavy with ripe fruit. They recognise her as Papay. The baby survives and that, dear reader, is why the tree is called papaya.