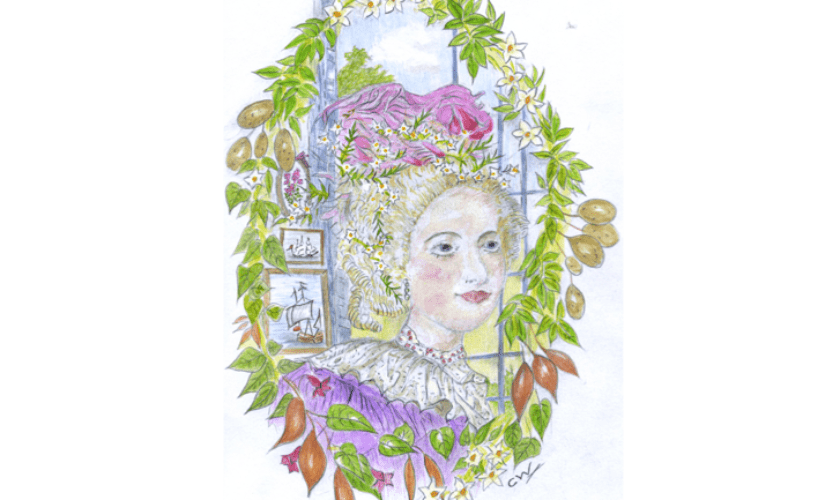 “Let them eat cake,” Marie Antoinette did not say. But she could have said, “Let them eat potatoes.” Apparently, she sometimes liked to wear potato flowers in her hair, which is not as incongruous as you might think. Potato flowers are actually very pretty (no wonder their potato vine relations are so popular on Bermuda’s walls and trellises).   But according to an article by Charles C. Mann in Smithsonian magazine, there was a practical reason as well. “Her husband, Louis XVI, put one in his buttonhole, inspiring a brief vogue in which the French aristocracy swanned around with potato plants on their clothes. The flowers were part of an attempt to persuade French farmers to plant and French diners to eat this strange new species.” As in other European countries, the farmers fed potatoes to their livestock rather than to people.

It seems odd the species—Solanum tuberosum L—is described as “new” to Europe in the eighteenth century. In fact, it wasn’t new—Englishman John Gerard mentions it in his Herball of 1597, which includes a portrait of himself holding a spray of flowers. “It has,” he says, “very faire and pleasant flowers, made of one entire whole leafe which is folded or plaited in such strange sort that it seemeth to be a flower made of six sundrie leaves which cannot be easily perceived. The colour wherof it is hard to expresse. The whole flower is of a light purple colour, stripped down the middle of every folde or welt, with a light shew of yellownes as though purple and yellow were mixed together.”

Gerard was one of the first to grow potatoes in England and recounts proudly, “I have received herof from Virginia roots which grow and prosper in my garden as in their own native country.” However, the name “Virginia potato” he adopted was incorrect. The Tudors could not have imported Solanum tuberosum potatoes from Virginia—they weren’t there.

In fact, the potato was originally cultivated in the Andes somewhere between present-day southern Peru and extreme northwestern Bolivia about 8,000 years ago. It wasn’t known in Europe until the Spanish encountered it during their quest for gold in Peru in 1532. They observed Inca miners eating chuñu, freeze-dried mashed potato that can last up to seven years. The Spanish were far more interested in acquiring treasure than they were in potatoes, not realising the impact the vegetables would have on burgeoning western populations, thanks to their nutritional properties and their productivity. But the Spanish did carry them on their ships for their own food and perhaps brought tubers home to plant. According to Henry Hobhouse’s Seeds of Change, they could have been brought to England by Sir Frances Drake, also more interested in gold and silver. He had been offered them in Chile in 1577 during his voyage around the world. In 1586, says Hobhouse, “Drake aimed to intercept and capture the annual Spanish treasure fleet in Cartagena on the Caribbean shore of modern Columbia; he missed it by twelve hours. Carrying on to Virginia and England he carried with him not gold and silver looted from the Spanish but a few potatoes, mere curiosities which had been obtained as ship’s stores somewhere in the Caribbean.”

Though Mann is not convinced it was Drake who introduced the vegetable to Europe, he tells us that, in honour of the privateer, sculptor Andreas Friederich erected a statue in Offenburg, southwest Germany, of Sir Francis Drake gripping a potato plant—a statue that was destroyed by the Nazis. “Sir Francis Drake,” the base proclaimed. Disseminator of the potato in Europe in the Year of Our Lord 1586. Millions of people who cultivate the earth bless his immortal memory.”

Who introduced the potato to Virginia? Believe it or not, we did. The potato, being a well-travelled vegetable, had been sent back across the Atlantic from London to Bermuda in 1613 aboard a ship named the Elizabeth. Lefroy writes in his Memorials, that the first potato roots on the island “flourished exceedingly for a time, till by negligence they were almost lost (all but two cast away roots), they have so wonderfully increased, they are a maine releefe to all the Inhabitants.” Indeed potatoes, like corn, were used as currency in Bermuda and during the seventeenth century were paid in rent to the Bermuda Company. Then, in 1621 Governor Nathaniel Butler helped out the Jamestown settlement by sending them two large cedar chests containing potatoes and other vegetables (or “pot” herbs) to their governor, Francis Wyatt. Eventually, potatoes would become a part of Bermuda’s relationship with the US and later with Canada. During the nineteenth and early twentieth centuries Bermuda exported potatoes to both countries during their winter months. And in all the countries potatoes became an abundant crop, making the nursery jingle particularly relevant: