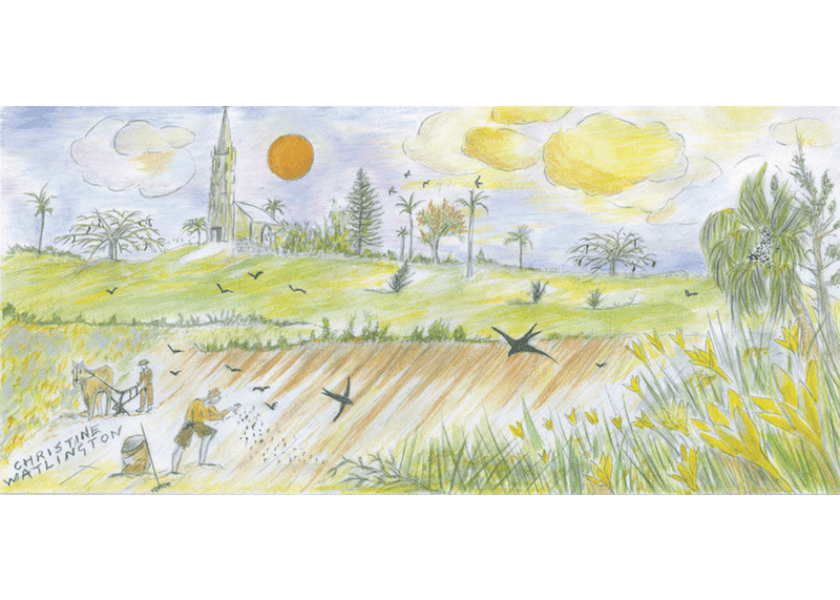 Now that the fall is once again upon us, I can’t help thinking poetry. Lines from two Caribbean poems come to mind. Jamaican poet H.D. Carberry begins his “Nature” with: “We have neither summer nor winter/neither autumn nor spring.” Valerie Bloom echoes this in her “Two Seasons”: “We no have no Autumn like Europe,/we don’ have de American Fall,” explaining “No, we don’t have four different season, /just two, de wet an’ de dry,…”

I would have found these statements very strange had I read them before I came to Bermuda in my early twenties. That’s because, like many children brought up in countries with four distinct seasons, I was coached by teachers in my English school to see them through the eyes of poets, such as Shakespeare, Keats, Shelley, Houseman and Frost. “Season of mists and mellow fruitfulness” Keats famously wrote, no doubt thinking of apples and pears, blackberries and gooseberries. Frost concentrated on the leaves: “Nature’s first green is gold, /Her hardest hue to hold.” And then added in his typically laconic, depressive fashion, “Nothing gold can stay.” While Shakespeare, writing long before in the sixteenth century, focused in one sonnet on the naked branches of late autumn trees, which he memorably called “bare ruined choirs.”

What about Bermuda? Do we have an autumn at all? I’d say we do although some times in an eccentric, untimely fashion. When is our season of mellow fruitfulness? Any Bermudian child can tell you that: in January, February, when the children disappear into the loquat trees, eager for the sweet tartness of those golden fruit. And when do we see Frost’s leaves of gold? In April, May, when the fiddlewood trees paint the hillsides with autumnal shades of yellow, copper and russet and the bay grapes on the coastlines help out, particularly on the south shore. In the spring the bay grapes’ round red-veined leaves turn yellow, orange and reddish brown before they drop from the trees. Once on the ground, they dry out and start to curl and we can be kids again, scrunching our way through them along the coastal trails. In April, we’re no different from North American children scuffling in carpets of maple and oak leaves throughout their fall.

But that’s not to say we don’t have autumnal things happening when they “should,” that is, during the months of September, October and November. We do, including truly autumnal colours. Take the varnish or Chinese rain tree, for example. I’m given a hint autumn is on its way when these beautiful trees break out into cones of yellow flowers, but when the seed cases appear, pink papery Chinese lanterns glowing in the morning sun, I know the season is upon us. (Watch out for these trees as you approach the Botanical Gardens from the west during September, October.) And then there are the rain flowers, the Bermuda crocuses, formally known as yellow atamasco lilies. They, too, come in the fall, though their appearance depends on rain. After a shower, they sprout up like yellow freesias blossoming out of their time. Then they disappear, until days and showers later their yellow blossoms once again sway in the autumn breeze disproving, at least for a while, that “Nothing gold can stay.” By late October, some of our trees do conjure Shakespeare’s “ruined choirs.” The poincianas, divested of their lacy leaves and blazing blossom, perhaps look more like umbrellas stripped to their struts although, like the black ebonies, similarly naked, they do have hanging pods. The frangipani, so profuse in fragrant blossom during the summer months, also drop their leaves warning us the summer is over. Occasionally they have pods, too, but that is rare. Bermuda may be unusually generous with its fruit in the winter month of January but thanks to the bay grape tree, it doesn’t let us down in the autumn. The bay grape’s small white flowers of spring become tiny fruit. By the summer, the pendulous strings carry fruit of a velvety green which by late fall ripen to a rich dark purple. Now is the time to make jellies and jams. Strangely, differently from any other country I know about, September marks our growing season, just when harvesting happens and is celebrated in other more northerly regions. Every September, the humid month whether we have a hurricane or not, my body just doesn’t believe the temperature has gone down unless I’m in the sea, which definitely feels cooler. To me it’s the hottest month of the year and yet that’s when our fields are cleared and the first agricultural plants start to appear. Thinking of Christmas, we don’t dream of a white one. Instead, we look forward to onions and carrots.