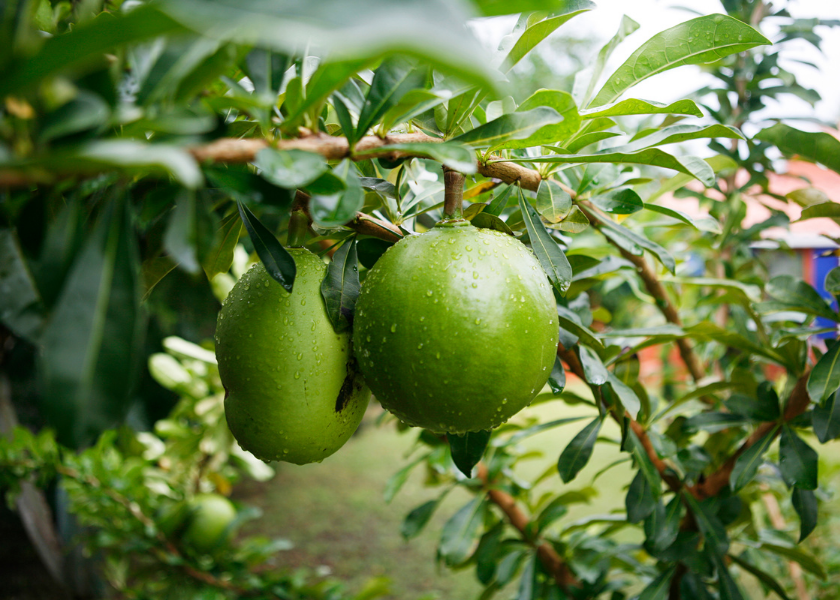 When I saw my very first calabash tree at Orange Grove during the early 1970s, I felt a moment of instant recognition. The tubular flowers and the green oval gourds, oddly sprouting from branches and trunk rather than hanging from stems, looked so extraordinary, I was sure I was looking at the bong tree of “The Owl and the Pussy Cat” fame. I was wrong, of course, though the bong tree does exist as the Nothaphoebe umbelliflora. This calabash is the Crescentia cujete, a tree that I came to understand has been both useful and culturally significant in Bermuda.

It was Mike’s Aunt Pink who alerted me to using the dried rinds of the gourds for craft. She cut one in half, scooped out the pulp, sanded then varnished each shell and voila, she had two pretty bowls. E.A. McCallan in his Life on Old St. David’s said these shells were called “coakers,” used chiefly to bail boats but also as scoops to “to dip feed from barrels and as water dippers in the making of arrowroots starch and for other purposes.” Many gourds, he said, were taken from Orange Grove’s tree. After the cedar blight deprived bluebirds of natural nesting sites, hollowed out calabashes came in useful as bluebird nesters. (See Shirley L.T. Pearman’s Hands On! craft book for instructions.)

The calabash, easy to grow from seed or by cutting, was introduced to Bermuda, though, by no one knows whom. Governor Hamilton mentioned it in 1790 as did Susette Harriet Lloyd in 1829. She refers to “a magnificent calabash laden with above 500 gourds” she saw in Somerset, “… some full grown, others just emerging from the bud, and the blossom, which is very pretty, in every stage of expansion.” But she also references the calabash at Walsingham which is where the tree’s cultural significance comes in. During his stay in Bermuda in 1804, Irish poet Thomas Moore apparently took a fancy to the Walsingham tree, making it famous, and wrote poems under it, including the following sentimental lines:

‘Twas thus in the shade of the Calabash-Tree,

With a few, who could feel and remember like me,

The charm that, to sweeten my goblet, I threw

Was a sigh to the past and a blessing on you.

Dr Johnson Savage’s 1834 sketch of male picnickers under the same tree shows it was a popular venue for British military officers, as indeed it was in November, ten years later. Samuel Triscott, a British officer stationed in Bermuda, invited 35 gentlemen for lunch at the self-same spot. For the Royal Bermuda Yacht Club, this event has a very special significance since it was then their club was founded. Unfortunately, the Walsingham tree was destroyed in Hurricane Emily (1987). Another has apparently been planted although quite where, I am not sure.

Moore’s allusion to the calabash traditionally made Bermudians affectionate towards him, but his lines are not nearly as intriguing as Nicaraguan Pablo Antonio Cuadra’s in his poem “The Jicaro Tree,” celebrating the same subject. Written in memory of journalist and politician Pedro Joaquín Chamorro, who was murdered for opposing the government of Luis Somoza Debayle and the dictatorship of Anastasio Somoza Debayle, Cuadra references the Mayan creation myth, in which Ahpú, a liberator, is beheaded by the lords of the underworld. After his head is put in the fork of the calabash tree, the tree bears fruit becoming, Cuadra writes, “The tree of skull.” The lords of the underworld make it a forbidden tree. Just as Eve eats the apple, so Blood Woman, the daughter of a lord named Blood Gatherer, demands the fruit. The head of Ahpú spits on her hand and the saliva miraculously impregnates her with twin boys, who eventually avenge their father’s death.

But early in the poem, Cuadra cleverly fuses the uses of the gourds with the liberty the tree symbolises:

The campesinos call its fruit el guacal or la jícara—

the cup of all we drink

and decorate it with bird carving—

because we drink the song

the fruit rattles in our fiestas as maracas and sonajas—

because we drink the music

since ancient times, in the dialect of the Chorti Maya,

the word ruch meant both

“calabash” and “skull” (just as it does today)—

because we drink thoughts

Using one of Pink’s bowls, I’ll drink to that.