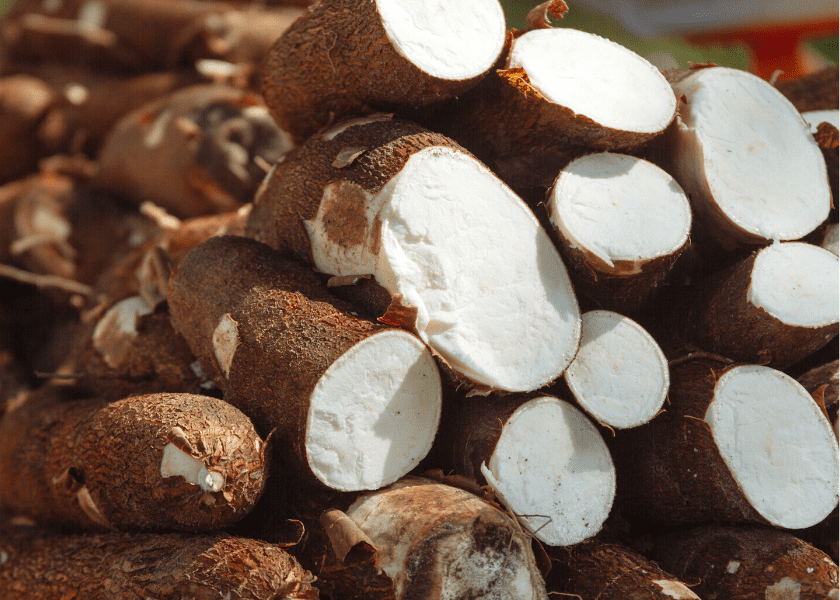 The Cultural Root of Cassava

When people talk cassava pie, you know Christmas is coming.

I listen to the talk but have to confess that during the whole time I have lived in Bermuda I’ve never tried my hand at making it. The whole process sounds tedious to me, tedious and downright terrifying – scrape, wash, grate and squeeze before you even begin the batter. But my friend Alison disagrees. She used to start literally from scratch: First plant your cassava, then wait for two years.

“The two-year wait was frustrating,” she admits. “But when we harvested the root and prepared it, it was very satisfying. It felt elemental – we were doing something people have been doing in Bermuda for hundreds of years.”

She’s right, of course – they’ve been doing it ever since 1616 when cassava root arrived in Bermuda from the West Indies on the Edwin. But still . . .

“Weren’t you scared of it?” I asked her, thinking about the poisonous juice trapped underneath the skin of the red or bitter kind of cassava.

“It felt good to know we were doing it right.”

I’m sure it did because if they hadn’t done it right they could well have been dead. But at least when she reached the grating stage, she had an up-to-date appliance.

In 1621, the Reverend Lewis Hughes wrote about cassava in his A Plaine and Trve Relation Of The Goodness Of God Towards The Summer Islands. “The Casaua roote” he wrote, “is like to proove a great blessing of God unto you, because it makes as fine white bread as can be made of Wheat, and (as I am persuaded) wholsome, because the Indians that live of it, are tall and strong men.”

Included in his exhortation was a recipe for cassava bread, but nowhere in it was there an explanation as to why it was so important to scrape the roots and then to wash them before grating the cassava. Nor was there a warning that the water in which the root was washed could be toxic or why you should squeeze the juice. If nobody got killed, that truly was a blessing. As Michael Jarvis explains in In the Eye of All Trade, white settlers in the early days of Bermuda were taught by Africans and Indians how to prepare cassava safely. But couldn’t mistakes happen?

Over a hundred years later, mistakes certainly did happen. Susette Harriet Lloyd relates in her Sketches of Bermuda: “The new year [1831] was ushered in by the disastrous death of a number of unfortunate pigs, which were poisoned by drinking of the water in which cassava had been washed. With their fate before my eyes, would you believe that I ate a large plate of cassava pie at dinner!”

She lived to survive the tale, but three years later as reported in The Royal Gazette [October 14, 1834] one poor little girl didn’t. After eating some bitter cassava, she died despite being given castor oil as an emetic. Two boys who had eaten it at the same time did survive thanks to “copious doses of whale oil.”

Andrea Olivia Peets, a writer and poet who specialises in recording St. Kitts’s rural practices and heritage, recalls as an eight-year-old in 1986 preparing cassava along with her siblings. In her family it was known as “kusada.”  She scraped the roots with a “barrow mouth spoon” and then placed them in a galvanised bath of water to soak them. I shudder to think of it – supposing one of the children absentmindedly licked her fingers? She says they were warned. But how many eight-year-olds would listen today?

“There were two simple rules,” she says. “Live or die!”

Interestingly, unlike Alison, she used a grater identical to the one Hughes described in 1621 which he said was made “with nayles broad pointed driven thick through a bord.” She recalls their hands moving “up and down like washing clothes on the wash board and their faces all twisted up from grating the skin off their fingers. The white kusada was stained with their blood.” That’s because the grater was very sharp and jagged.

You’d think the whole experience would put her off. But no, she still prepares cassava from scratch.

Will I try? I don’t think so. It’s all in the wash and that’s what’s so very scary.