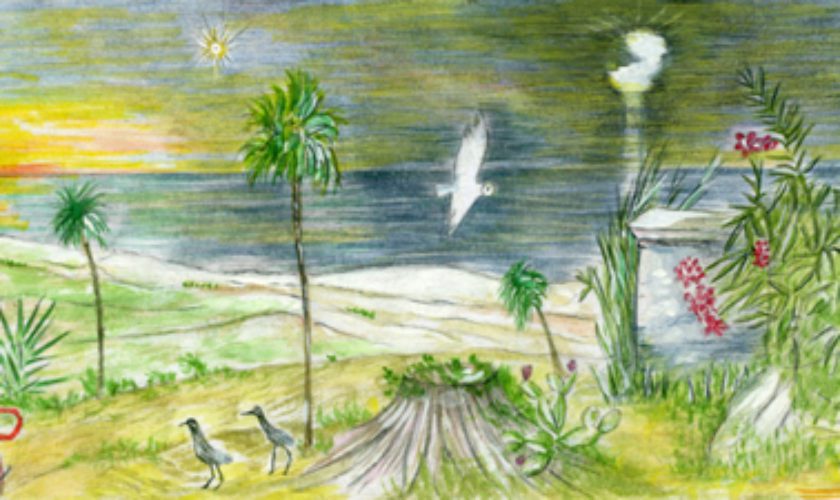 The Sands of Time

Every Christmas morning Elbow Beach is on the move as hundreds of people flock down to the shore to enjoy an authentic Bermudian Christmas. For celebrators from freezing northern climates, forgotten are the sleighs and blankets, snowy landscapes and frosty cottages. Instead, everyone revels in Bermuda’s best colours—the jewelled blues of the ocean, the creamy pinks of the sand, and the sunny yellow of the Elbow Beach Hotel benevolently overlooking the scene. As the ocean flows so does the Champagne, and the whispered roar of the waves rather than the tinkle of bells is the background music for cheery, convivial conversations.

Over two hundred years ago, this beach was on the move for another reason. When Susette Harriet Lloyd visited it in 1833, before tourism really became a developing industry, there was no hotel. She describes this area in a letter, later published in Sketches of Bermuda, as “a great natural curiosity called the Sand Hills…It is a vast accumulation of sand, occupying an extent of several acres, and rising into considerable hills. As it is constantly receiving fresh supplies from the sea, it is daily encroaching further inland, and some cottages, which only a few years ago were at a considerable distance from it, are now nearly buried.” Later in her letter she says: “The moon now rose and shewed us the extent of the sandy plain, which looked like a vast field of snow: here rising into considerable hills, there shadowed by the naked branches of a half-buried cedar—terminating on one side in the boundless ocean and the distant breakers; on the other hemmed in by a ridge of dark hills.”

In his Bermuda Guide of 1890, James Stark notices the same phenomenon, describing it as a “wonderful ‘sand-glacier’”steadily progressing inland in “a mass about 25 feet thick.” He includes in his book an illustration showing the chimney of a house buried in sand, comparing it to a tombstone “with a great bush of oleanders drooping over it.”

Martin L. H. Thomas explains in The Natural History of Bermuda that while it is unlikely the sand dunes were moving when the island was colonised at the beginning of the seventeenth century, they started to shift by 1760 because of shoreline and near-shore clearances. Always ready with a helpful suggestion, Lloyd recommended solving the problem by planting trees—and she was right. Thomas says that once the dunes were vegetated, the sands ceased to shift. By 1908 when Richard Berry Johnson built his hotel, called the South Shore Hotel at Elba Beach, his property included farmland which helped to anchor the sands as well as to provide the guests with fresh vegetables.

Today, as we walk westwards along the beach, the sand is firm under our feet but parts of it are covered with the crisscrossed sprawl of bay bean vines and their pink pea-shaped flowers. The limestone cliffs on our right remind us that eons ago they, too, were sand dunes, now fossilised. One part of the cliff has a thick jagged fringe of what I think is the native beach lobelia, otherwise known as inkberry, but its white fruits confuse me. Surely they should be black? Botanical artist Christine Watlington later solves the puzzle for me. It is a lobelia but another invasive, thicker and bigger form—beach naupaka or Hawaiian half flower—which has recently been introduced and apparently is threatening to take over. Other plants edging the cliff line include spiky Spanish bayonet, contrasting with feathery tamarisk, bay grapes and palms and another invasive, the umbrella tree. We cannot see the grounds of the hotel from the beach, but I can see them in my mind’s eye. Following English landscaper Russell Page’s design, in the 1980s Francois Goffinet created their terraced gardens leading down to the cliff edge.

Other creatures on this beach are moving. We enjoy watching three sanderlings scuttle clockwork fashion to and fro along the shore line, presumably looking for things to eat. What we don’t see, however, are blue by-the-wind sailors, a species of small jelly fish constantly sailing the sea thanks to their sails and their tentacles. Nor do we see their enemies, purple ocean snails. A shame for us but fortunate for them since the corpses of both species turn up on the beach after windy weather.