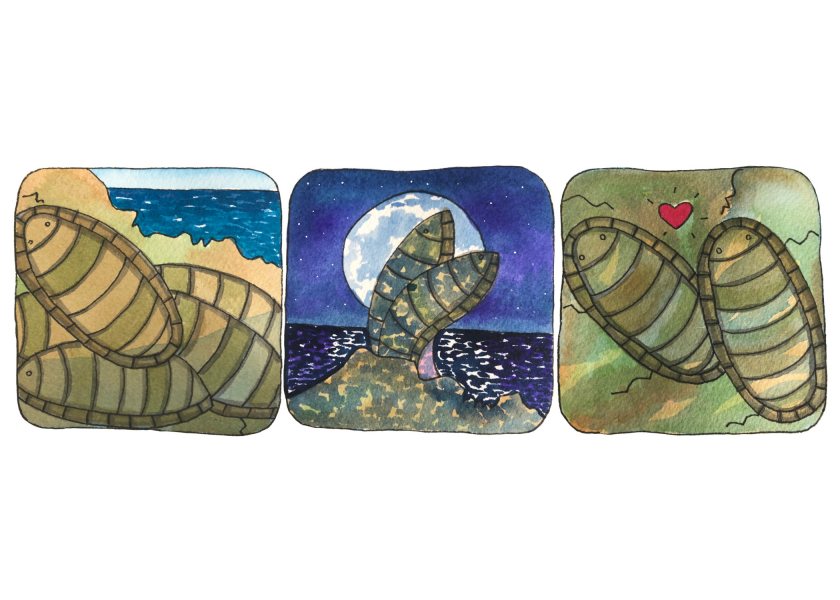 The Secret Life of Suck Rocks

In our daily walk along Horseshoe Bay, we have become intrigued by a colony of chitons or, as Bermudians call them, suck rocks (Chiton tuberculatus in formal parlance), half-hidden on one side of a rocky crevice at the far eastern end of the beach.

There must be at least 28 of these marine molluscs clustered together, almost but not quite flush with the surface of the rock face. We can see only the dorsal side of each chiton—an oval, convex form with horizontal lines revealing the overlapping eight plates which make up the shells and which inspired another name, coat-of-mail shells. Around the plates are narrow borders, girdles, which are covered with tiny spikes. I find these molluscs so pleasing to look at—from an artistic point of view, I think they could be the inspiration for a patchwork hanging or for a piece of jewellery that Bermudian jeweller Lynn Morrell might design.

Chitons are most visible when the tide is lowish because they live in the intertidal zone. At low tide yesterday, we were close enough to see that in the sunlight they look yellowish brown though another name for them is West Indian green chiton. (When a chiton dies, the plates fall apart and can be found on the beach, and it’s then their green colour is more apparent.) We were also close enough to see they appear totally unmoved by the waves intermittently crashing over them. I think about a Welsh metaphysical poet who in his struggle to be a committed Christian sometimes envied members not of the human race. In his poem “Man” Henry Vaughan observed wistfully the daily routines of birds and bees:

I would—said I—my God would give
The staidness of these things to man! for these
To His divine appointments ever cleave,
And no new business breaks their peace…

We have never seen them move. We have never seen them do anything at all.  But that doesn’t mean they do nothing; it’s just they do it when no one is looking, in the dark or when the tide completely covers them. We realise they do relocate because each day they are not in exactly the same position. In fact, the day before yesterday two managed to separate from the colony on the opposite rock. (Are they loners or what?)

Apparently, at night chitons can travel, their plates allowing them to arch upwards and to move over uneven surfaces. They eat in the dark too, their main source of food being the algae they rasp off the rocks. How do chitons eat? They have tongue-like ribbons of tiny teeth with metal tips. According to Wolfgang Sterrer, they also scrape algae off each other’s backs, which could explain the two loners. Maybe they were not antisocial at all? Merely satiated? Because this morning, they have disappeared or have joined the colony.

I would love to see the ventral side of a chiton but to do so would mean prising it away from the rock and that I feel I have no right to do. My friend Charlie tells me he had no such qualms as a boy when, like many other fishermen, he used to wrench chitons off the rocks with an implement and use them as bait. “Suck rocks were great for attracting rockfish,” he explains. That may be why chitons are far fewer in Bermuda than they used to be although they are making a comeback. But if I could prise one away without damaging it, it would probably roll into a ball. And I’d eventually be able to see its central foot which allows it to, yes, suck onto a rock and to move. I might also see a groove between the mantle and the foot holding tiny gills. Not visible, are its eyespots embedded within the outer layer of the plates making it sensitive to changes in light.

This morning we see the chitons again seemingly impervious to a turbulent sea. And I think Vaughan, suffering reprisals from the English Civil War, might have seen these chitons not as staid but more as heroes hanging on, right to the bitter end.

To learn more about the unique biology of chitons, take a look at the below video: