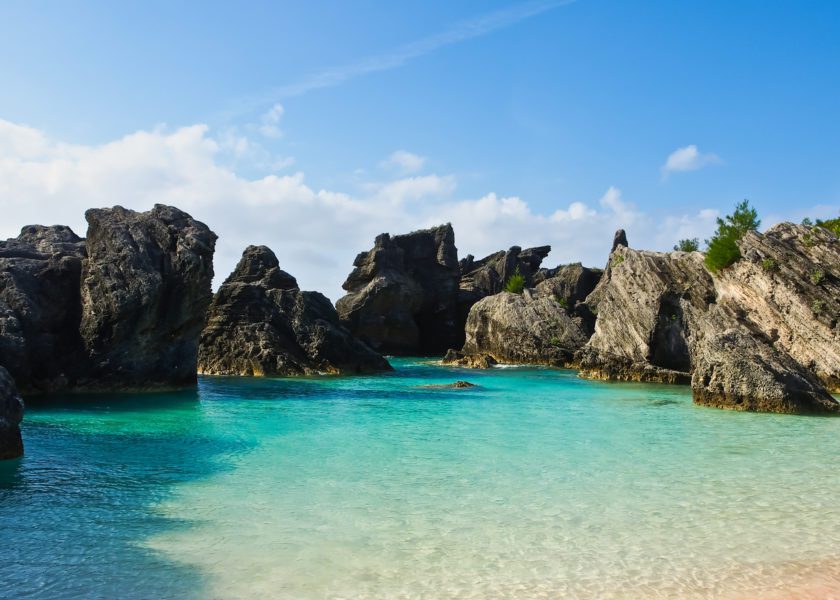 For so many mothers in Bermuda, Port Royal Cove in Southampton forever evokes halcyon days spent with their small children building castles on the sand or bobbing in the shallow water. It certainly does for me. When our son was little, during the early 1980s, we would arrive daily on Horseshoe Bay armed with umbrellas, buckets and spades and after trudging our way up the narrow, sandy cliff path west of Horseshoe, Doug would run ahead, down to the hidden cove, more commonly known as “the baby beach.” There the cove would magically appear before him, towering limestone formations almost enclosing the tiny pool of water. One stony profile of an ancient chieftain stared out to sea while to the right, others seemed engaged in a perpetual powwow. The longtails would swoop in and out, their tiny bleats haunting the air.

Reaching the water’s edge, Doug would jump from a small rock over and over again into the pool; he’d watch out for parrotfish; he’d build castles in the air. Such was the easeful monotony of those summer afternoons, one sliding into another, I was deceived into a sense of immortality as if Doug would always be three, would always be splashing into the water. But before I knew it, the bucket and spade gave way to the surfboard and the baby beach for him became a family memory.

My son might grow older and change accordingly, but the beach, I reasoned, would remain, in my lifetime anyway, ever the same. I couldn’t have been more wrong. In the first week of September 2003, Hurricane Fabian blasted the island for a day and a night. Once the storm tracked northward away from Bermuda, we went down to Horseshoe to check the beach and the cove. To our astonishment, Fabian had completely destroyed the cliff, and that hillside path. The baby beach was so exposed, it was completely noticeable from the main bay. I walked to the pool’s edge, expecting to see Doug’s rock but it, too, had disappeared. I looked up, relieved to see the ancient chieftains were still there, though deserted by the longtails.

When Hurricane Paulette hit us in 2020, once again Horseshoe and the baby beach took a battering, as we discovered the morning after. Trying to reach the water’s edge was hazardous as the winds had created at the entrance to Horseshoe a steep embankment of sand which stretched most of the way east. As for the cove—the tide had surged in during the storm but once it receded, there was the tiniest strip of very deep water. Two days later, at full tide, the pool seemed to have acquired new depths. No longer was it shallow, suitable for toddlers and wimpy bad swimmers like me.

Horseshoe Bay and the beaches east of it had changes, too. In fact, after the hurricane, some of the little beaches seemed to have disappeared altogether. Certainly, swirling water prevented us from walking to Peel Rock Cove and Butts Beach at low tide.

One phenomenon I have greatly appreciated since Hurricane Paulette is the appearance of the intertidal rocks, especially when low tide happens first thing in the morning. In the distance, they appear to be a bright glistening green, contrasting beautifully with the creamy sand from which they rise. Close up, the reason for the incandescent green is clearer. The rocks are covered with a green matte of silky hair. Dr Struan R Smith of the Department of Environment and Natural resources explains the matte is an alga, Cladophora fuliginosa, which he says, “seems to be an early coloniser on newly exposed rock.”

The major changes to Port Royal and Horseshoe after Fabian were permanent. The ones after Paulette not so much. Local ocean experts promised us beaches disappearing after a hurricane do eventually come back. And come back, they have. The water at Port Royal is shallow again. The weed that arrived is now disappearing, as Dr Smith suggested it might, explaining it might persist “until fishes urchins and snail start munching on it.”

But he has noticed other phenomena after Paulette: for example, exposed fossil cowrie shells on Elbow Beach, probably, he says, 200,000 years old, and diverse marine shells on Warwick Long Bay East, including West Indian top shells that may be even older—about 250,000 years. Thus, we can see that hurricanes not only cause physical changes but also reveal ones made thousands of years ago, only to become hidden in our geological records.

We are, as ancient philosopher Heraclitus argued, in a permanent state of flux. And yet some things don’t change. Port Royal Cove is still a refuge for young parents and small children, just as it was for us some 40 years ago. Whatever the changes wrought by Fabian, for the new generations the baby beach has held its own magic, as Doug’s children now well know.