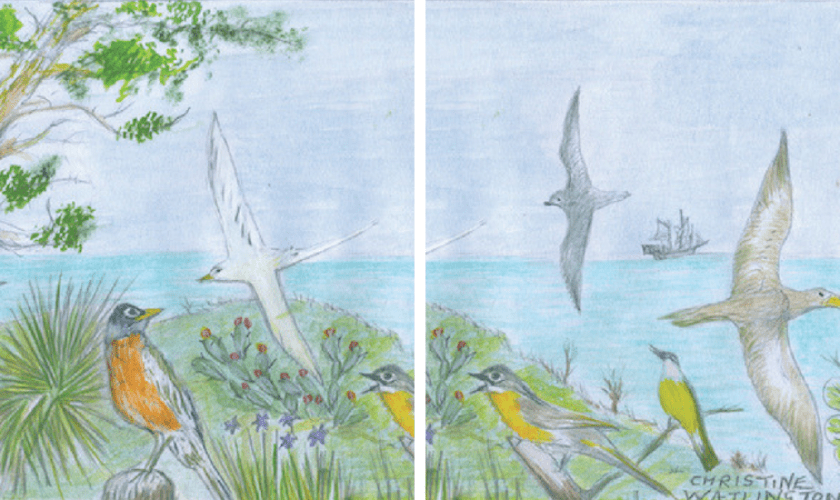 Year of the Bird

We’re already at the midpoint of the year, with the summer about to wreak its full heat on us and then the fall to bring us migratory birds, both expected and accidental. We never know quite what will arrive because storms sweeping the island and driving the birds here are never predictable. In 2009 a storm swept some 200 yellow-billed cuckoos our way instead of to their intended destination south, while just six months ago at least a hundred killdeer arrived on our airport runway, parks and golf courses. At Port Royal Golf Course, for example, numerous killdeer filled the air with their haunting bleats while swooping down to the grass to putter with the golf putters in clockwork fashion.

This year, 2018, is a special year because it has been designated the Year of the Bird, thanks to organisations such as National Geographic, the National Audubon Society, the Cornell Lab of Ornithology and BirdLife International, which have collaborated to celebrate the hundredth anniversary of the Migratory Bird Treaty Act. Andrew Dobson informed us of this in the three lectures he presented at BUEI in February and March. The idea is to increase awareness of how our changing environment is driving massive losses among bird species around the world.


According to Birdlife International, things will be even tougher for migratory birds if the Trump administration allows industries to be no longer liable for incidental bird deaths caused by bad planning. (Perhaps they should read naturalist Frank Buckland’s argument that had Emperor Napoleon deigned to notice the migration of storks and cranes south as he led his armies north into Russia, he might have delayed his invasion to avoid the onset of a terrible winter.)

Designating 2018 the Year of the Bird is also an effort to promote the beauty and wonder of birds. However, alerting us to the magical worlds of birds is precisely what Andrew Dobson has been doing for all of us in Bermuda during the 28 years he has been on our island. Here’s the irony: as the birds travel south, he and his wife, Katrina, will be winging their way north, back to the UK, which will once again be their permanent home.


So many people will miss him for the tireless work he has carried out as a teacher at Warwick Academy, as a singer for various musical groups and especially, for those of us who love birds but aren’t too knowledgeable about them, as the president of the Bermuda Audubon Society.


It was thanks to Andrew Dobson I learned how to use binoculars and first enjoyed the Paget Island weekend birdwatching camp which he and Katrina have hosted year after year, except when storms or facility defects prevented them. I’ll never forget the magic of seeing over eighty different species over the two days: night hawks on our arrival, oven birds, water thrushes, black and white warblers, birds I had never seen in my life and which I most certainly would never have noticed had it not been for Andrew’s acute observational powers. Since that time, like so many other birdwatchers in Bermuda, Mike and I have accompanied him on countless excursions during which without fail we have observed at least two species impossible to see without his eyes. It has to be said that sometimes we suspected he’d go on the walk a couple of hours before so he could magic birds into places where we’d be sure to see them. Sometimes, Andrew would alert us by e-mail or Facebook to the sudden arrival of a pelican, for example, or to a flock of frigate birds flying over the Causeway and into St. George’s. I’ll never forget an e-mail he sent telling us to sit on a certain bench in front of a tree in the Botanical Gardens. We obeyed and there in front of us, to our utter astonishment, was a ruby-throated hummingbird. But he would also make himself available to visitors eager to see our birds, giving up many a Saturday or Sunday to accompany them and asking only for a donation to the Audubon Society.


His departure does not mean he’ll forget our birds. On the contrary, after his retirement he is going to update his book A Birdwatching Guide to Bermuda by including in it the many beautiful photos of birds he has taken over the years. So happily it’s a question of au revoir rather than farewell because he has to come back to launch it. In the meantime, a huge thank you, Andrew, for being Bermuda’s Wizard of Earthsea for so many years.