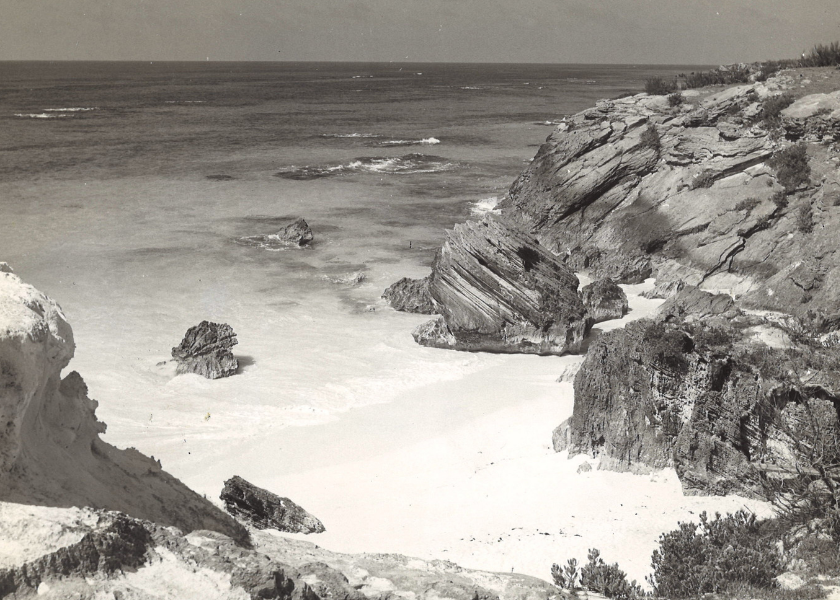 10 Things You Should Know About Bermuda’s Geology

1. Volcanic Formation –Bermuda Wasn’t Always Where it Lies Today
The American and European tectonic plates meet at a place in the Atlantic Ocean called the mid-Atlantic ridge. Here, magma from the earth’s core constantly bubbles up and cools, forming new rock that pushes the ridge apart at as much as 4cm per year.

The landmass we now call Bermuda originated from somewhere only slightly west of the mid-Atlantic ridge, in a huge volcanic eruption that created a seamount close to the surface of the water. Over millions of years the Bermuda seamount migrated more westwards as the tectonic plates were forced apart.

2. Challenger Bank is a Volcanic Peak
Ever been fishing at Challenger Bank? There’s a reason the fish congregate there – the seamount is raised 4000 metres above the sea floor due to the same volcanic activity that created the island of Bermuda. Challenger Bank just didn’t quite come to rise above sea level. In shallower waters, more coral reefs can develop, attracting the game fish at Challenger Bank.

As the Bermuda landmass travelled slowly westward, it hit a “hot spot” of volcanic activity. This triggered a second eruption, and differentiated raised peaks, which included the Bermuda seamount, where the island now lies, as well as Challenger Bank and Argus Bank.

3. Bermuda has Underwater Beaches
The same sandy shores that sunbathers flock to can be found many metres below sea level on the Bermuda seamount. This is evidence to scientists that sea levels used to be much lower than they are today. In the Pleistocene epoch, much of the world’s seawater was frozen in ice, allowing the beaches now submerged to develop above sea level.

4. Life Begins at Sea
The entire geological formation of the island of Bermuda began at sea. In an unstable climate where sea levels rose and fell, only a few undersea communities were able to develop. These clustered on the layer of volcanic basalt and made the seamount grow 10 metres taller – almost, or level with, the surface of the ocean. Without this added height, terrestrial communities would not have been able to eventually develop.

The corals and algae that congregated on the seamount were experts at taking calcium carbonate from the water and utilising it to build hard skeletons for themselves. What gives a brain coral its shape is a calcium carbonate skeleton. Little animals called polyps live together in the skeleton, and we can observe their colour, and even the minute tentacles they project outside of the skeleton to capture food. When corals die, they still look for the most part how they did when alive, just white – their calcium carbonate skeleton is very extensive. Over time, they built up deposits of limestone that would form the base of Bermuda.

5. Parrotfish Built the Island
Parrotfish are the producers of sand in Bermuda’s waters. They scrape algae of the reef with their powerful beaks, but in doing so, take a little bit of limestone rock with every bite. Later, the sediment is excreted by the fish as sand.

As coral reefs built up limestone rock underwater, the parrotfish would shave it away a little. This sand production allowed the Bermuda seamount to raise above the level of the water, and for the terrestrial habitats to develop.

6. Bermuda Used to be 10x Bigger than it is Today
As sediments rolled ashore, sand dunes formed. It’s likely that at this time there were no plants, whose root systems would have held sand dunes together. Instead, the dunes were swept by winds and shifted constantly. They occupied a space on top of the Bermuda seamount 10x larger than our island is today.

7. Rock Formed from Sand because of Rainwater
Bermuda limestone formed with the help of rainwater. Rainwater is naturally slightly acidic, so when it came into contact with the calcium carbonate sand grains, it broke them down a little. The lime-laden water then distributed throughout the sand grains, by falling deep into the porous dunes and evaporating out of it. Each time this lime-laden water washed over the sand, it would cement grains together. As the process was repeated many times with each rainfall, the grains solidified into limestone.

8. Bermuda Rose Higher than it Stands Today
As well as sand dunes stretching our landmass larger, they likely rose very high out of the water. Dunes rose at least 200 feet above present sea level – we know this because many of them hardened and fossilised exactly as they were formed. Just look at Blackwatch Pass to see the dunes, now limestone, towering around you.

In addition, sea levels at the time were likely lower than they are today, and when the sand dunes first formed, they likely rose another 100 feet out of the water.

9. Bermuda Soil was Imported
Most scientists hypothesise that Bermuda’s soil was blown in from the Sahara desert in Africa. This red soil, called terra rossa, can still be seen today at Walsingham nature reserve. It’s likely that terra rossa blown all the way from Western Africa was able to reach our island due to hurricanes and tropical storms that often originate near Africa and sweep over Bermuda. Without this rich soil, Bermuda would have likely ended up very barren. Terra rossa contains a lot of clay and is able to grow a wide variety of plants.

In the very early years of Bermuda’s natural history, a primitive, sandy soil was created from limestone sediments and decomposing plant matter.

10. Anyone Can Find Fossils in Bermuda
It may surprise you that fossils can be found in Bermuda. The most prevalent of these are fossilized palmetto stumps. Often these can be found near “red beds,” accumulations of soil within limestone rock. Also cropping up are palmetto fronds, land snail and marine snail shells, and ghost crab burrows. Just have a look at Devonshire Bay or Ariel Sands to see some for yourself.