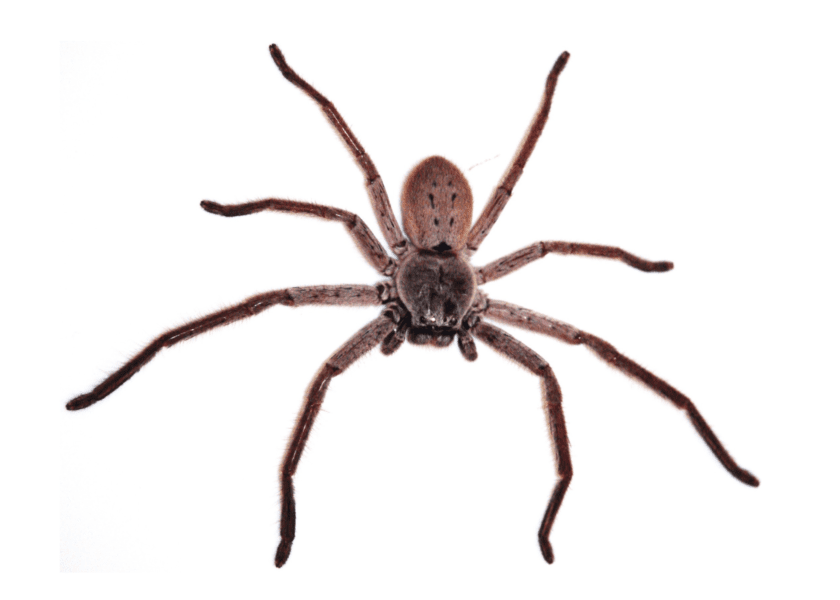 6 Creepy Crawlies Scarier Than A Cockroach

Tail-Less Whip Scorpion
You may know these creatures from Harry Potter and the Goblet of Fire (2005), directed by Mike Newell, when in the film Mad-Eye Moody demonstrates a curse on an unfortunate specimen, to the horror of arachnophobe Ron Weasley. In 1991, Dr. Wolfgang Sterrer reported a thriving colony of the formidable insects at Tucker’s Town.

The tail-less whip scorpion, which is actually a type of spider, uses six of its legs for walking, and the other two have developed into elongated sensory feelers. The creature also sports two vicious pedipalps reminiscent of torture instruments, which ensnare prey with ease. The appendages, which can grow to about 4 inches long, are also used when jousting with other members of the same species to settle disputes. Though the spiders are completely harmless to humans and have no venom, their appearance is the stuff of nightmares.

Huntsman Spider
Once abundant on the mainland, the huntsman spider is now a rare sight. These spiders, lightning-fast and as big as a man’s hand, are ruthless killers of insects, which gave them their common name. Huntsman spiders do not spin webs, and instead catch prey directly with wicked accuracy. Though these spiders are large and look terrifying, they can actually be a good addition to the home, as they are one of the main predators of cockroaches in Bermuda.

The spiders inject their prey with potassium-channel-blocking venom before consuming them, and this same venom can cause a nasty bite on a human, though it is not fatal. However, these spiders are shy creatures that do their best to avoid humans.

Centipede
The massive Tropical centipede, or St. David’s centipede, can grow up to a foot long, and produce a painful bite. Though the bite is not fatal, it can pose risks for those allergic to insects venom. Centipedes will rarely venture inside the home, preferring to hunt and make nests in damp, cool areas. They will most likely be spotted in areas that are usually left undisturbed; under leafy debris, in old Bermuda walls, or woodland areas.

Like the huntsman spider, this apex insect is considered a friend to gardeners, as their predation keeps down populations of smaller pest insects, including cockroaches.

Golden Orb Weaver
There’s nothing at all dangerous about these Bermuda residents, but that doesn’t mean they’re not scary. The massive, skeletal spiders can be found making low webs in woodland and garden areas, increasing the chances of having one end up thrashing about in your hair.

The spiders’ characteristic fearsome appearance makes them suited for weaving, and their striped colouration warns predators of their venom. Though insecticidal, the venom of the golden orb weaver is harmless to humans. These spiders can be beneficial to islanders because of their propensity for predicting hurricanes. As they sense a storm brewing, they build their nests as low as between grass stalks, so as not to be blown away.

Brown Widow
Both black and brown widow spiders have been reported in Bermuda, but brown widows are more commonly sighted. Like the black widow, the brown widow also has an hourglass marking on the bottom of its abdomen, but it is usually orange in colour and fades over time.

All widow spiders possess a powerful neurotoxic venom, but brown widows are able to inject less venom than their cousins, the black widows, and pose no fatal threat to humans, as toxicity is confined to the immediate bite area.

Black and Yellow Mud Dauber
We have three species of wasp in Bermuda, but the black and yellow mud dauber is one of the most interesting. The wasps gather at puddle and pool edges to create mud balls in order to construct their nests. The nests are made up of vertical, cylindrical cells inside sheltered structures, either man-made or natural.

After building the nest, the female will capture and paralyze spiders to serve as the first meal for the hatchlings she will lay and seal inside each individual cell. It is the nests that bring out aggression in these otherwise peaceful wasps, and they will defend them by stinging anything that comes close to them, including humans.