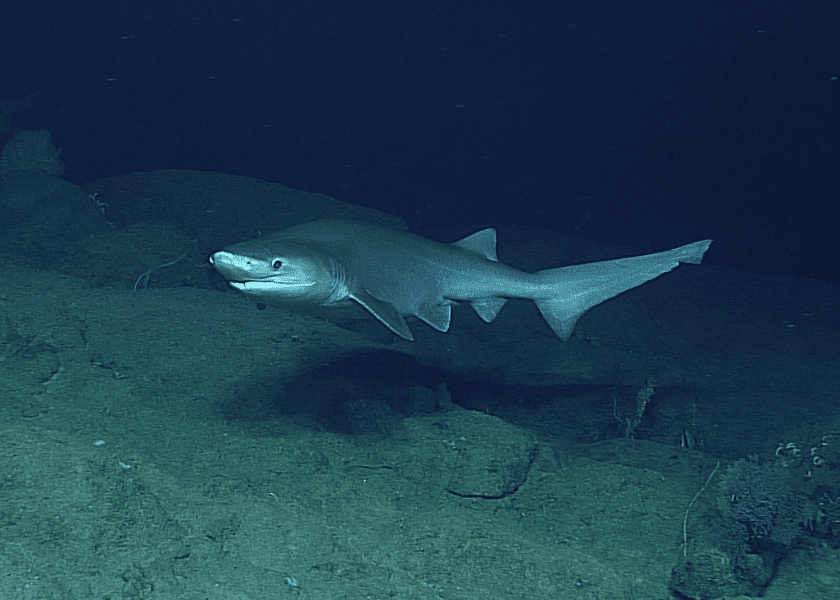 6 Species Lurking In The Deep Sea Around Bermuda

Those of us who don’t even like the feeling of a cow polly nipping at our toes when swimming should be very grateful these terrifying creatures are relegated to living amongst Bermuda’s depths. 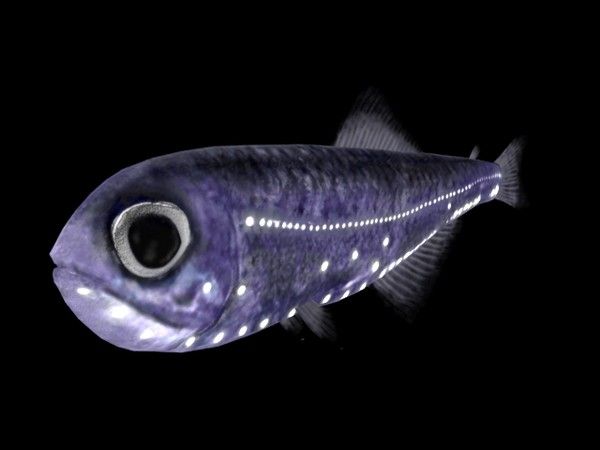 Lanternfish
Lanternfish might be some of the most numerous fish in the ocean – information from deep sea trawling indicates that they may account for up to 65% of deep-sea biomass. They have brilliant bioluminescent bodies, with photophores at various ventrolateral rows on the body and head.

The lanternfish’s diel vertical migration is well known. Though they usually inhabit the mesopelagic layer of the ocean, the fish rise to the epipelagic zone at dusk in order to feed on zooplankton and avoid predation, between 10 and 100 meters down. 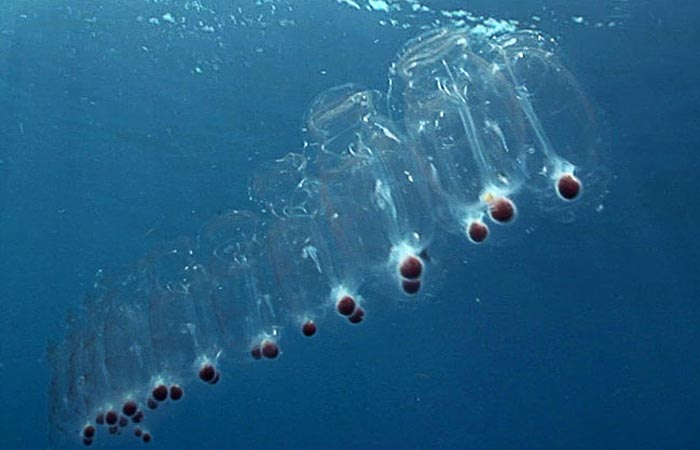 Salps
Salps are barrel-shaped gelatinous organisms that can stick their bodies together to form long chains. In this way, they can feed more efficiently on their phytoplankton prey. When phytoplankton is abundant, salps can reproduce very quickly to create vast blooms. Eventually all the planton is filtered out of the water and the salps can no longer be sustained in such large quantities.

In Bermuda, salps can be spotted in deep water. Crew on BIOS’ Atlantic Explorer have reported seeing salps at nighttime which were attracted to the ship’s lights during a deep water cruise. 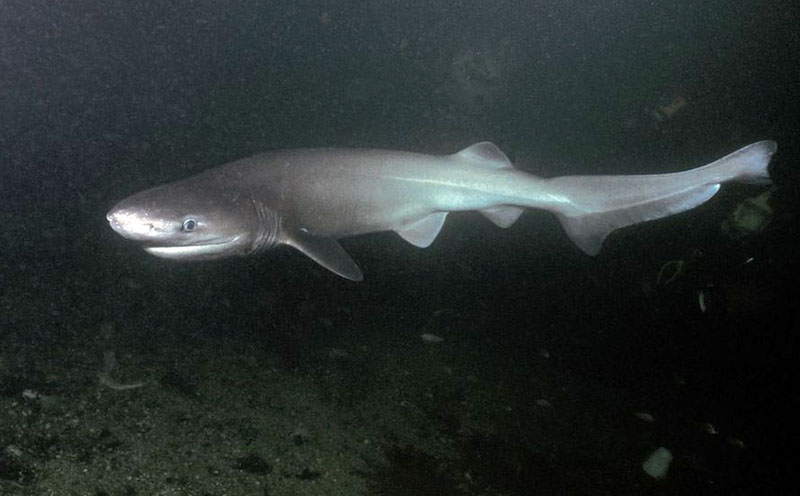 Sixgill shark
This interesting shark resembles closely many of the sharks from the Triassic period, as exemplified by its retention of six gill slits, rather than five, as most modern day sharks have. It is typically found near the ocean floor at depths greater than 100 meters. It can only be seen near the surface of the ocean at night.

In an interview with Choy Aming of the Bermuda Shark Project, he recounted that the team had to put two thousand feet of steel cable out to get one to come up. However, the team was astonished with the number of sixgills they caught in a short space of time. Because the sharks seldom come in to contact with fishermen, it’s possible that their population has remained unchanged by human fishing for thousands of years. 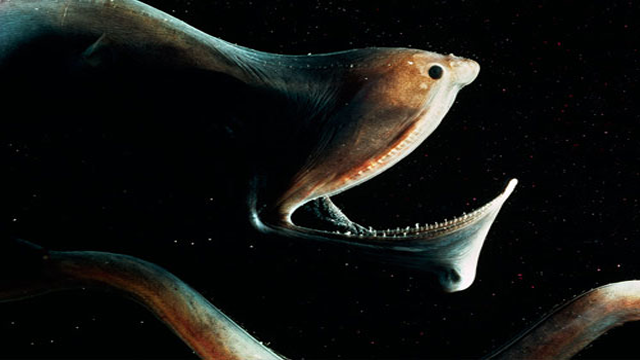 Gulper eel
The gulper eel is rarely seen by humans, and most of the information we have about it comes from dead specimens hauled up in fishing nets. However, in more recent years, many specimens have been caught live by shallower-water fishermen in the Atlantic Ocean.

Scientists believed at one point that the gulper eel’s huge mouth was used as a passive receptacle for prey to fall in to. Recent study of the eel in its natural habitat uncovered that it is a much more active hunter, stalking prey and filling its balloon-like mouth with water which it filters through for morsels of food. 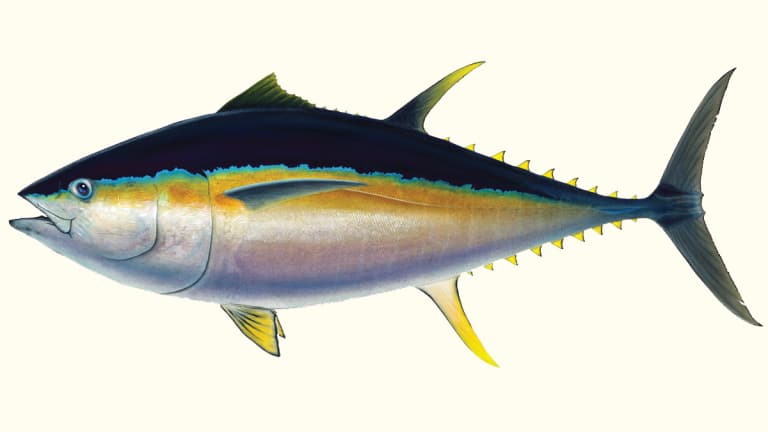 Bigeye Tuna
Bigeye tuna are another species that migrates to the surface at dusk. During they day they are a mesopelagic fish, but they undertake thermoregulatory behavior at that time, alternating between deeper, cooler waters and shallower, warmer waters to re-warm themselves.

These tuna are very similar in appearance to yellowfin tuna, and huge – growing up to eight feet long. This species of tuna has a unique physiology that allows them to forage in deeper, cooler waters and tolerate an oxygen poor environment. They are some of the only fish that are able to maintain a body temperature higher than that of the surrounding water temperature. 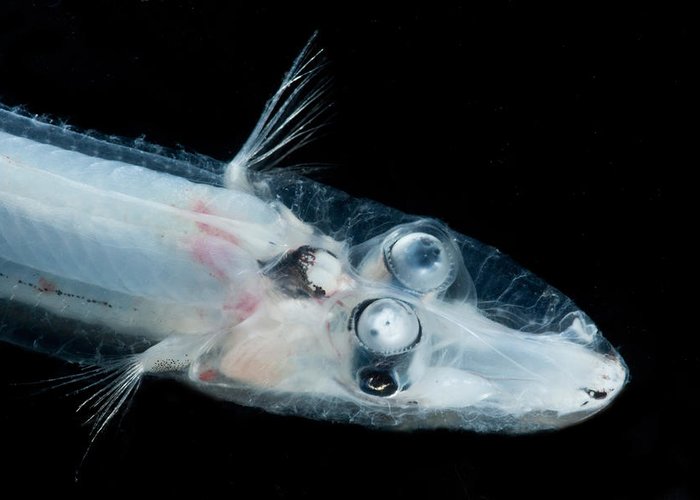 Brownsnout Spookfish
A type of barreleye, these fish may have some of the most curious faces of any animal. They live in the meospelagic and bathypelagic zones and have tubular eyes fused in a transparent skull, pointing permanently upwards in order to pick out the silhouettes of prey animals against the gloom. In addition, the brownsnout spookfish is one of the two only vertebrates in the world that employ a mirror, as well as a lens, in the eye in order to focus light.

The fish appears to have a worldwide tropical and temperate distribution, with some records in Bermuda.