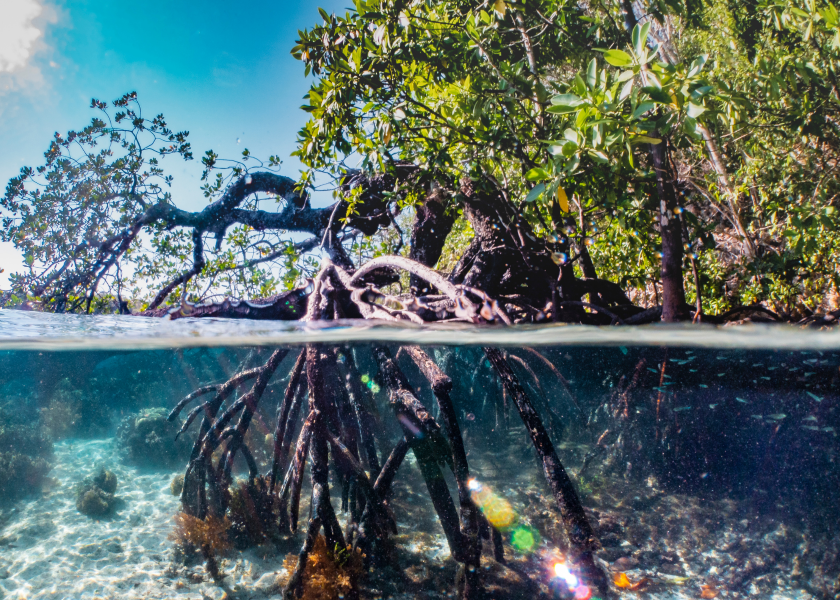 6 Things to Know Before You Visit Hungry Bay

Permission to visit Hungry Bay must be granted in advance of your visit, as it is located on the other side of a collection of private residences. The Hungry Bay nature reserve is protected as a Ramsar site, of which there are seven in Bermuda. This international designation recognises Hungry Bay as a very important wetlands habitat, especially recognising its role in the life cycle of waterfowl. Here are 6 things we think you should know about before planning your visit to Hungry Bay.

1. Mangroves
Hungry Bay is the largest remaining mangrove swamp in Bermuda, once referred to as the “Great Mangrove,” and was protected as a nature reserve in 1986. Hungry Bay has traditionally been used as a sheltered mooring spot for boats in severe storms. Drainage channels between the mangrove swamp fringing the bay have been enlarged to accommodate boat traffic. This is the only place in Bermuda where the swamp is enlarged enough to not just fringe the coast, but extend beyond it. The historical mangrove forest is made up of trees that reach up to 12 metres tall.

Both red and black mangroves are present in the swamp, and can be told apart by a few key features. Black mangroves have woody trunks and light-coloured leaves. The method these trees use to get rid of excess salt from living in salty water is to let some of their leaves accumulate with salt and let them die and drop off. For this reason, the surface of the leaves of the black mangrove taste very salty.

The red mangrove is the more classic mangrove we think of, with large prop roots that you can see above the sand. The trees also have many pneumatophores reaching up from the ground beside them, and these can be thought of as little straws enabling the tree to breathe as it grows in submerged soil.

Red mangrove prop roots exhibit distinct zonation – this means that certain animals can be found on certain parts of the prop root according to whether the area is wholly or partially submerged by the tide. Oysters, sponges, and algae cover the submerged areas of the prop roots while the parts exposed to air are utilised by mangrove crabs and other wildlife.

The winding roots of the red mangrove also provide very small spaces for young fish to hide. Mangroves are therefore important habitats for fish nurseries, where very small fish can find a safe haven until they are large enough to survive on the reef.

2. Rocky Shore
The rocky shore at Hungry Bay also shows zonation according to the tide. For example, animals that are able to retain water within their bodies can survive higher up, in areas where the tide rarely reaches. The chiton, or suck rock, is a good example of an organism like this. They are impossible to pick off the rocks because they have to seal water between their bodies and the rock where they settle.

Looking in rock pools here may reward the observer with sightings of snails like the prickly winkle, an unassuming snail that blends in with the rock and is able to survive past the high tide line. Bleeding tooth nerites, with black and white striped oval shaped shells, must remain closer to the water line.

3. Hermit Crabs
The Hungry Bay site is a very important haven for hermit crabs. They are now rare in Bermuda because their lives were heavily intertwined with that of the West Indian Top Shell. Hermit crabs utilise the shells of other species for their home as they cannot produce their own shell. The West Indian top shell marine snail was the only animal with a shell large enough to fit a hermit crab, which can grow up to 10cm long, and when these snails were overfished, hermit crabs ran out of shells to use.

With the reintroduction and protection of West Indian top shells, the hermit crab may also be making a comeback. At the Hungry Bay reserve, they feed on a wide variety of plants, and can be seen climbing high into the canopy of trees. They also scavenge dead and rotting animal matter. Perhaps because this nature reserve has very limited access for visitors, the hermit crab is able to forage undisturbed.

4. Great Land Crab
This mangrove swamp is also the only site where the giant land crab is still known to exist. This impressive crab can have a carapace width of 15cm, and one of the male’s claws can grow to 15cm or larger, often becoming bigger than the carapace itself.

They make their homes in deep burrows near the shore with a pool of salt water at the bottom so that the crab can wet its gills. The crabs are shy, and their numbers are greatly reduced due to hunting by humans in Bermuda’s early years. Habitat loss is also a threat, and the shaded cover of the Hungry Bay mangrove swamp site is essential for their survival. They strive to stay in the shade during the day and hunt at night.

The crabs feed on plant matter as well as carrion. They will also cannibalise other members of their species.

5. Surfing
The rough seas at the mouth of the bay are one of the only appropriate locations for surfing in Bermuda. The location produces breaking waves that are large enough for surfing, and is best visited at a low rising tide or a low dropping tide.

6. Portuguese Man o’ War
Surfers should be aware of the bay’s high concentration of Portuguese man’ o wars. The small opening acts like a funnel for these venomous marine creatures, and surfers may find themselves caught by a stray tentacle.