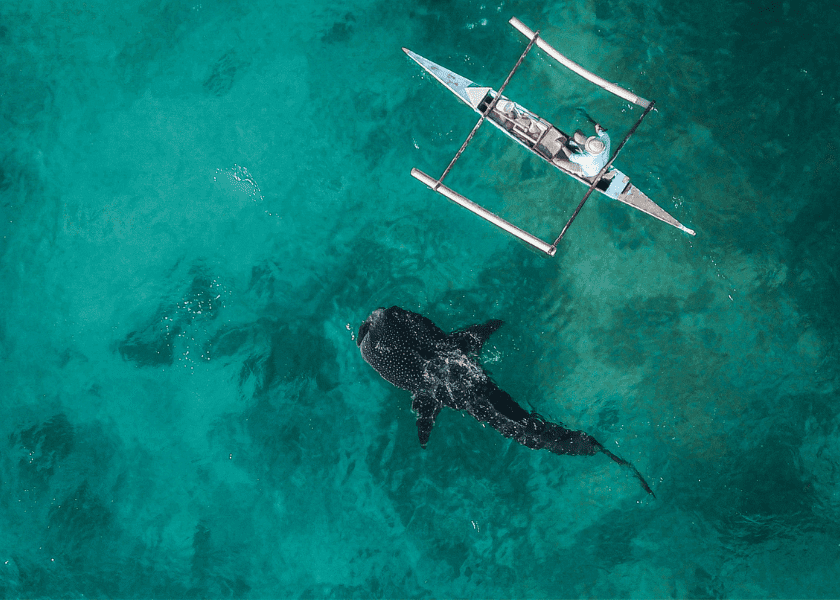 7 Amazing Ocean Creatures and Where to Spot Them

Bermuda’s waters are ripe with beautiful ocean creatures that you can spot close to shore or in open water. Here are 7 of the most fascinating animals waiting to be seen.

Spotted Eagle Ray – Flatt’s Inlet
The crystal clear and often still-as-a-millpond waters of Flatt’s inlet serve as a highway for Spotted Eagle Rays. The speckled backs of these graceful rays can be seen travelling from the open sea on North Shore through to Harrington Sound and back again.

The sight of their wingspan passing calmly just below the surface will delight any casual, or more scientific observer. The rays have venomous barbs beneath their dorsal fins, but only feed on small fish and crustaceans, sometimes digging their snouts into the sand to search for food.

The rays can often be seen riding the strong currents under Flatt’s bridge, or cruising near the various docks around Flatt’s, or by Gibbet’s Bay. The inlet experiences a lot of boat traffic and so it is unsafe to swim there; however, if you do encounter a ray while snorkeling there is no need to fear: they are usually shy, and sometimes curious towards divers, rather than aggressive.

Gold Spotted Eel – Gravelly Bay
Not often thought of as a snorkeling beach, Gravelly Bay just next to John Smith’s is home to many vibrant rim reefs close to shore. Rim reefs have good visibility and are dominated by massive hard corals, and the island’s South Shore gives close access to them, whereas you must travel about 10 miles away to reach them from North Shore. They lead to terrace reefs, which later drop off from Bermuda’s seamount.

This little eel is found at shallow depths no more than 15 meters, and loves the rocky shores of Gravelly Bay. It can be found poking a curious snout out of nooks between rocks, or slithering courageously over the sandy bottom. While most eels are most active at night when foraging for food, gold spotted eels can often be seen traversing the reefs here at daytime.

Snorkelers can take comfort that this eel only grows to about 3.6 feet and stays thin, while the green moray, also found here, can grow up to 8 feet long and weigh 65 pounds. Eels do not pose a threat to humans, and snorkelers will enjoy coming close to such a unique underwater inhabitant.

Arrow Crab – Cooper’s Island
These little known crabs can only be seen while snorkeling as they are a completely marine species, unlike the sally light foot which can spend time both in and out of the water, or the Bermuda land crab that is strictly terrestrial. They are small, spidery and golden, with neon strips of green running laterally along their bodies. Truly a treasure to spot, the arrow crab can often be seen elegantly poised atop winding labyrinths of brain coral folds, searching for particles of food through the water.

At Cooper’s Island, the crabs can normally be found on the northeast side of the beach perched atop rocks in the shallows. On the northwestern side the crabs can also be found, but onlookers may have to go free diving to get close enough to make them out against the coral.

It is possible that the restoration efforts at Cooper’s Island Nature Reserve, which included the protection of reefs and the islands above them, allowed the arrow crab and other species to thrive. The shorelines are also an essential habitat for West Indian Top Shells, which were once extinct locally, but whose population numbers are on the rise once more after being reintroduced to the nearby Nonsuch Island.

Midnight Parrot Fish – Tobacco Bay
Bermuda lives up to its reputation as the parrotfish capital of the world. From massive rainbow parrotfish to the startlingly colourful queen parrotfish, our reefs are maintained and accessorized by these interesting grazers. Bermudians pride themselves on their parrotfish, but have you seen them all? We have ten species in Bermuda, and the electric blue midnight parrotfish is a rare species often overlooked.

Tobacco Bay and its surrounding reefs indeed offer some of the best snorkeling on island, with many different species of parrotfish able to be observed on the reef daily. Midnight parrotfish can be seen traveling in shoals of up to ten individuals, with dark colouration broken by patches of brilliant indigo. Almost as large as the massive rainbow parrotfish, these fish are actually very shy and often swim away from divers, so a close encounter with the gentle fish is truly spellbinding.

Green Sea Turtle – Daniel’s Head
These curious reptiles saturate the waters around Somerset in huge numbers. Unlike the rest of the world, in Bermuda sea turtle populations are thriving, probably due to proactive conservation efforts by the Bermuda Turtle Project. Interestingly, Bermuda was also the first country ever to introduce environmental protections legislation, in 1620 decreeing that no turtle fewer than eighteen inches in carapace length should be caught to be eaten.

When green turtles are younger, they are omnivorous, but become strictly herbivorous as they age, making the sea grass beds around Daniel’s Head attract larger turtles in great numbers. In the turquoise waters here, they seem boldly unafraid of swimmers, and enchant beachgoers by surfacing and fixing a scale-mosaic head and black eyes on them curiously.

It’s possible to view these marvelous and prehistoric creatures from above the water at close range. If you stand among a sea grass bed, or simply stay still on the sand long enough, they will pay you no mind and come close to you while grazing. There is no doubt that a visit to Daniel’s Head will allow visitors either in or out of the water to glimpse these spectacular creatures.

Whale Shark – Challenger Banks
Though the sight is extremely rare, only perhaps one per year, whale sharks can be seen cruising in deep water off Bermuda’s shores. Fishermen and divers are usually the witnesses of such a fantastic creature, during voyages to Challenger Banks about 12 miles offshore. These breathtaking creatures are pelagic but usually stay near the surface, never diving below 1,800 meters.

The largest fish in the sea, the whale shark is a true gentle giant, only eating very small fish and plankton by filter feeding. This feeding is not passive, and whale sharks can hunt and gulp by ram feeding, a process where large quantities of prey are swallowed whole with no use for their small, vestigial teeth. The spots and stripes, which pattern the whale shark handsomely, are like a human fingerprint, unique to each individual.

Despite their size, whale sharks are gentle towards divers, even letting themselves be held on to for a ride. If you spend any time out on deeper waters surrounding Bermuda, maybe one day you will be lucky enough to catch sight of one of these slow swimming marvels of the marine world.

Peacock Flounder – Gibbet’s Bay
This interesting reef dweller can be found on sandy sea bottoms around Bermuda, camouflaging its oval shaped body to match the terrain. While this tactic might fool fish and is truly and evolutionary marvel, snorkelers can usually distinguish the fish from the bottom.

The life cycle of the flounder makes juveniles and adults look like completely different species. Young flounders begin looking just like any other fish and swimming upright, but over time the eyes migrate to the same side of the head and eventually rest on the ocean floor. Flounder eyes can move independently of each other like a chameleon’s, which gives them a big advantage against predators.

At Gibbet’s Bay, the flounders find the perfect habitat in the shallow waters, resting for long periods of time in the same spot. The flounder is a nocturnal hunter, and so rest during the day easily observed. By snorkeling or oftentimes even wading, visitors can get a close look at these strange creatures.

If you don’t feel confident in fish identification, don’t worry! Ron Lucas, who took many of the photos in this post, together with BZS has developed an app to help you. You can download Bermuda Reef Life HD for a comprehensive guide to Bermuda’s marine life.