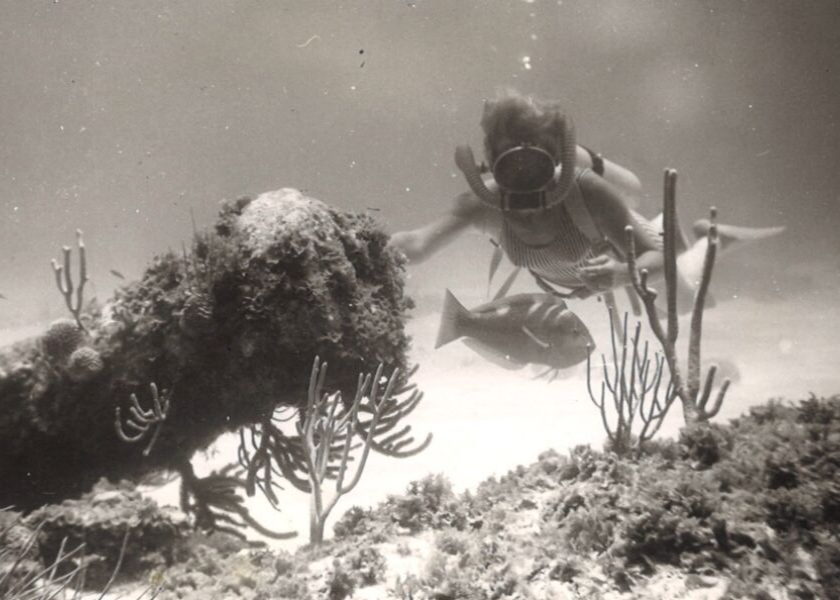 Take only photographs, leave only footprints – this explorer’s maxim applies to the underwater world too! The best way to explore reefs and bays in Bermuda is to stay horizontal on the top of the water, so that you don’t risk injuring yourself or marine life. From weird textures to venom, here’s our list of underwater residents better left alone.

1. Nudibranch
Bermuda has a variety of nudibranchs, and all of them are bad news to step on! The sea hare, a dull-coloured, large nudibranch, will feel velvety soft, but may be so startled by you that it will release a squirt of purplish ink into the water! Some people report that this ink causes them skin irritation, but the nudibranch is mostly harmless.

The zebra nudibranch is virtually immune to predation due to its intense defense mechanisms. This distinctive blue and yellow sea slug stores harmful chemicals in its mantle, making it undesirable to approach or eat to would-be predators. The slug probably won’t hurt you if you accidentally step on it, but it may release foul tasting and smelling chemicals into the water to ward you off. 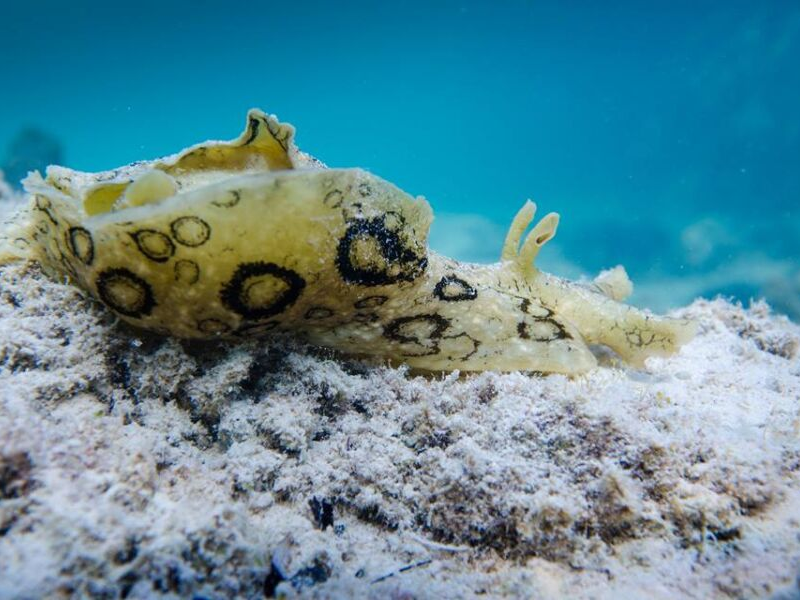 2. Sea Urchin
Bermuda has plenty of urchins and they love to cover themselves with material to help with camouflage and protect themselves from UV rays. This makes it all the more easy to get stuck with a sea urchin spine! The purple sea urchin can commonly be seen breaking up its silhouette by covering some of its spines with shells, leaves, or even trash that it finds on the bottom.

Luckily, long-spine sea urchins, whose spines can reach 12cm in length, spend most of their time tucked tightly into crevices in the reef. If you’re unlucky enough to be spiked by one, the spine will crumble immediately, and the pain will only last a day. The Queen triggerfish is the urchin’s main predator, and so it only moves around and grazes at night, when predation is less likely.

3. Sea Cucumber
We’re not sure who will enjoy the encounter less – you or the sea cucumber. These sausage-shaped marine animals act to overturn the sediment on the bottom, sifting through it for edible morsels of plant debris and bacteria, and leaving tubes of discarded sediment in its wake.

The sea cucumber won’t hurt you – in fact, you can pick them up quite happily (as long as you set them back down again gently and upright).

4. Stonefish
The stonefish mimics the sea bottom environment in their colour and texture, because they let worms, crustaceans and algae make a home on their bodies.

They are almost impossible to distinguish from the surrounding environment because of their mottled appearance, and spend most of their time camouflaged on the sea bottom or on the reef.

Stonefish have venom contained in spines on their back, and when a swimmer steps on one, the sharp spine emerges from a fleshy sheath, delivering the venom deeply into the skin. The pain is excruciating, and can cause temporary paralysis, but is rarely fatal if treated.

If you are stung, it is recommended that you soak the area in hot water and seek medical attention. Being stung can send your body in to shock, which is dangerous, especially if you are far from the shore.

5. Seaweed and Algae
Most of the water you will wade into in Bermuda is carpeted in smooth, clean sand. However, there are certain areas where sand can be a little bit furry and squelchy, as it’s covered in algae and seaweeds. These areas tend to be around harbours or areas with less water movement, and touching a foot into that brownish ick is not a good feeling!

Some sea bottoms are covered in green pin-cushion seaweed, dense tumbleweeds creating a tickly mat on the sea bottom. Others are populated by stiff and disconcerting merman’s shaving brush, or the fleshy tendrils of sea lettuce or petticoat algae. Brushing up against any of these with a foot may cause swimmers to exit the water.

6. Turtle Grass
Areas where turtle grass grows sometimes overlap with where other species of algae grow. The mats of turtle grass are often made up of sand of a different texture – a little squelchy and full of fibrous plant matter. Furthermore, the grass may hide things that can actually hurt you, like corals, sponges, or hydroids.

The grass itself feels about the texture and stiffness of acetate. Luckily, the critters hiding in the grass that you might see make up for any disgust in stepping on it you might feel – it is home to crabs, shrimp, eels, octopi and turtles.

7. Fire Sponge
Often confused with fire coral, this neon orange sponge can commonly be seen covering large surfaces under and around Flatt’s bridge. The sponge grows in shallow and in deep water, so it’s important that swimmers are vigilant not to touch its surfaces.

The sponge is covered with tiny sharp needles, some of which become lodged in the skin when a swimmer brushes against it. They cause a burning sensation and a painful rash. Fire coral can do the same thing, but you’re less likely to stand by accident on the hard, tree-like branches of the upstanding fire coral. Fire sponge coats flat surfaces.

8. Coral
As all swimmers should know, touching coral can disrupt the coral’s growth and cause problems for it, and standing on the reef is never a good idea. The oils present on human skin can disrupt the protective mucous membranes on the outside of corals, and cause whole colonies to die.

What’s more, many types of coral can harm you if you touch them or cut yourself on them. Coral skeletons are very sharp, and cuts can quickly become infected because they leave a small amount of animal protein, and calcium, in the wound itself. Furthermore, coral can contain stinging cells, which will inflame a cut.

It’s important to clean the wound very well and use an antibiotic to prevent infection. Keep an eye on any cuts you get from coral for signs of spreading infection.