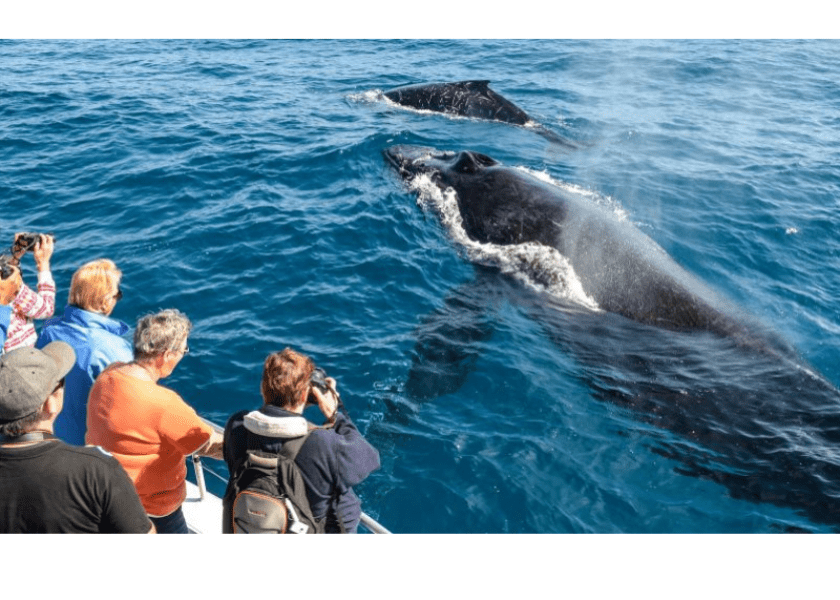 A Guide to Whale Watching in Bermuda

Each spring, about 10,000 migrating humpback whales make their way past our pink shores on their way to cooler waters up North for the summer months. While passing by, these migrating whales make a pit stop in Bermuda, creating an opportunity for locals and visitors to see these whales both from a distance and up-close.

What You Should Know Before The Whales Arrive
While there are other species of whales in Bermuda (pilot whales and sperm whales) during the months of March and April, visiting humpbacks are most common. These humpbacks spend their winters in the warm waters of the Caribbean and travel to the cooler waters of Canada, Iceland and Greenland to feed during the summer months. With Bermuda situated in the mid-Atlantic, we are perfectly poised to accept these whales as they travel north.

There are two different ways to spot humpbacks in their natural habitat:

1. From the South Shore: On a really sunny and clear day, it is possible to spot humpbacks breaching in the waters off South Shore. While they can be seen with the naked eye, it’s a good idea to have a pair of binoculars so that you can view the whales more closely.

2. On a whale-watching tour: Running through both March and April, whale-watching tours depart at either Dockyard or Flatts and get as close to the whales as possible while still keeping a respectable distance. Whale-watchers can expect to see humpbacks breach, tail slap, spy-hop and blow! Binoculars and cameras are encouraged and guests are warned, they might get wet.

How to Prepare for a Whale-Watching Tour
Whale-watching tours can be booked through Island Tour Centre. Once you’ve decided which tour to join and completed registration online, you should focus on preparing for the tour, especially if you have kids. Whale-watching tours are 5 to 6 hours in duration and although spotting humpback whales is exciting, it can be a long day for children and one must be fully prepared because once the boat leaves the dock, there’s no turning around. Here’s what you need for a successful day at sea spotting humpback whales.

1. Gravol: For those who suffer or might suffer sea sickness, Gravol is a good idea (see below for more sea sickness tips and tricks). Of course, it’s always a good idea to check with your doctor before taking anything for sea sickness.
2. Sunblock: It may not be summer yet, but the sun is still capable of burning – slap it on and stay sun safe
3. Camera: Make sure your battery is charged and you have extra batteries too
4. Binoculars: While the goal is to see whales up close, there will be whales far off that are worth looking at too
5. Snacks: This cannot be stressed enough, you will get hungry! Load up on snacks and drinks, especially if you have children.
6. Water: Seems obvious, but staying hydrated is key for a day on the water, especially if you tend to get sea sick
7. Sunglasses: Seeing the whales is much easier if the sun isn’t in your eyes
8. Comfortable shoes: Wear shoes you can move around in while on a rocking boat, bonus points for shoes with rubber soles
9. Rain jacket or windbreaker: It’s well-known that weather in Bermuda is unpredictable, therefore it’s a good idea to always come prepared.
10. Activities for kids: There is a chance that kids will lose interest in the humpbacks after a certain time, so it’s a good idea to bring with you books, coloring books, an iPad or small toys for your child to play with. Keep in mind that the boat may be rocking depending on the conditions of the water, so make sure to secure your child’s books and toys.

The Behaviour of the Humpback Whale
Humpback whales communicate in many different ways with one another. Here are four different behavours you can spot while whale-watching:

1. Breaching: Scientists believe that migrating whales are more likely to breach than stationary whales and that’s because whales use breeching as a form of communication when they are several miles apart, in essence, it could be their way of saying, “Hey, I’m over here!”
2. Tail Slaping: Tail slapping occurs when humpbacks use their flukes to smack the surface of the water quickly and with force. Scientists believe that whales do this as a way to communicate, scare fish or as an act of aggression.
3. Spy-hoping: When whales lift their heads vertically out of the water so that their eyes are just above the water line, that is called spy-hopping. Whales do this in an attempt to see above the water without breaching.
4. Blowing: Each species of whale has a distinctive blow, and unlike humans who breathe involuntarily, a whale must always think about surfacing for air. Because of this, whales never sleep, instead they doze with one half of their brain while the other half remain active to focus on breathing.

How to Prevent Sea Sickness
While Bermuda’s waters aren’t terribly rough for whale-watching, there’s always a chance of sea sickness. Here are 6 tips on how to stave off getting ill while at sea.

1. Be well rested: Exhaustion makes you more susceptible to motion sickness
2. Take antiemetic drugs: Gravol and similar medications are great for counteracting the effects of chemicals released by the brain during seasickness. Make sure to consult with your doctor or pharmacist before taking anything.
3. Get fresh air: Seasickness can be caused by the inner ear and the eyes not sending the same message to the brain about alignment and balance. For example, when on a boat, your inner ear can feel the movement of the ocean but your eyes may not be able to see it because you are below deck, causing your brain to be unclear and uncertain about necessary alignment and balance, which can result in motion sickness. If you tend to suffer from sea sickness, try going above deck and watching the horizon, that will help the eyes see what the inner ear can feel.
4. Eat: Having food in your stomach is better than having an empty stomach and light and bland foods like saltines, pretzels and bread are best. Ginger ale is also great for motion sickness.
5. Wear an acupressure wristband: Many people find that applying pressure to a certain point on the wrist helps to avoid nausea which is a symptom of motion sickness. Acupressure wristbands can be found at most pharmacies.
6. Avoid stimuli: Greasy, spicy and acidic foods as well as alcohol can lower your body’s resistance to motion sickness. It’s also a good idea to steer clear of strong perfumes or odors on board a boat and certainly keep your distance from others who may be experiencing motion sickness, especially if they are vomiting.