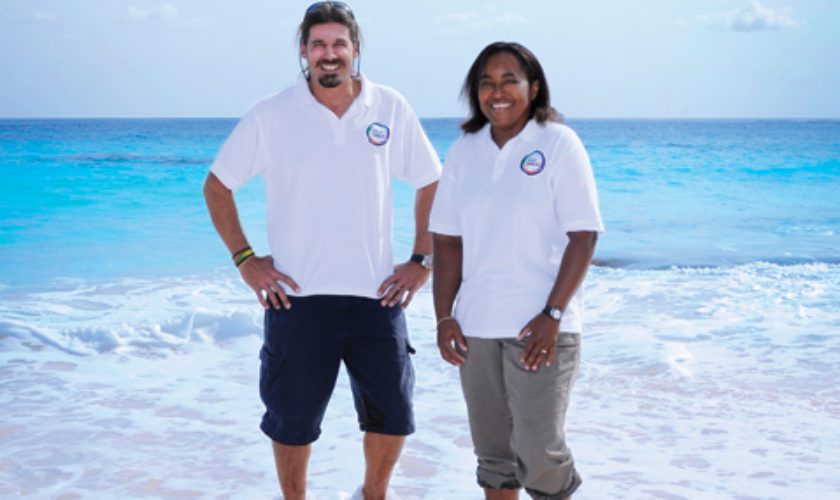 A Halo of Hope

Under the auspices of the Pew Environment Group, Bermuda leads the world in initiating an important marine reserve within the outer boundaries of our waters.

Bermuda sits within a very special part of the world’s oceans, the Sargasso Sea. This extraordinary ecosystem has been called the “golden rainforest” of the ocean and is as teeming with life as a coral reef. Named after floating golden-brown seaweed that grows in vast mats, the Sargasso Sea provides a nursery for fish and other sea life, such as turtles and endangered American and European eels. Wahoo, tuna and other pelagic fish forage in and migrate through the Sargasso, as do humpback whales. The seaweed also benefits Bermuda when it washes ashore and sinks into the sand, strengthening beaches and dunes against erosion from the wind and waves.

The Sargasso Sea extends south and east of Bermuda over two million square miles, an area about half the size of the United States. As the only nation state within this exceptional part of the ocean, Bermuda is in a unique position to lead the campaign to protect it. In collaboration with international marine-conservation groups and private-sector donors, the Bermuda Government has formed the Sargasso Sea Alliance to push for better protection of this critical habitat. Most of the Sargasso Sea is in international waters where no country has jurisdiction and there is no legal framework for enforcing protective measures. However, part of it lies within Bermuda’s Exclusive Economic Zone (EEZ), which extends 200 nautical miles from the coast; it represents the island’s own piece of this special gem, which it has the power to conserve. Creating a marine reserve within Bermuda’s own EEZ—a proposal that has informally been dubbed the “Blue Halo”—would be the first critical step toward the larger international initiative. While no final decisions have been made yet, public consultation on the proposal is presently underway.

The Blue Halo refers to the concept that the marine reserve​ would have inner and outer rings. Bermudians primarily fish around the island’s coast and on the reef platform and banks; only a few venture into waters beyond Argus Banks. The inner ring of waters around the island would remain a rich fishing zone where commercial and recreational fishing would continue as at present. The outer ring, however, would encompass the reserve. While few locals fish in the more distant waters of our EEZ, this area is vulnerable to foreign ocean-going vessels that fish there illegally. These poachers not only threaten the very existence of some fish populations, but they also reduce the amount of fish available to local fishermen. In order to protect the habitat and species within, marine reserves are typically no-take areas. There is scientific proof that this allows fish stocks to recover; the fish tend to grow larger, and there is a spillover effect into areas outside the reserve.

The Pew Environment Group (see sidebar on page 41) has been funding two Bermudians, Chris Flook and LeeAnne Hinton, to work as independent consultants on the project and build public awareness. Pew came to Bermuda at the request of Government to help with the creation of the marine reserve because they had done similar work elsewhere.

“Our objective so far has been public outreach, educating people and explaining to them why they should care about this,” explains LeeAnne Hinton. “We communicate with all the involved parties: Pew, the Department of Environmental Protection, the Sustainable Development Department and the Department of Conservation Services.”

Flook and Hinton have developed educational materials, such as a video, brochure and website, visited schools and spread the message at over 10 major events this year, including the Annual Exhibition, Beachfest and Culturefest. “I estimate that we have touched in some way about 23,000 people,” says Hinton. “We are getting the idea of a marine reserve into people’s minds so they are aware of it and ask questions. Then they will hopefully take part in the public consultation.”

The public consultation process is being led by Government’s Sustainable Development Department. “It’s very important that stakeholders and Bermuda residents generally are consulted on this issue,” says Charles Brown, head of the unit. “Our EEZ is a vast asset for Bermuda. We want to try and make the best-possible long-term decision for all residents.” He says that a public-consultation document will be widely circulated and that stakeholders with a particular economic, environmental or social interest will be targeted. “I anticipate decisions will be made before the end of the first quarter of 2013,” he adds. “In the meantime we are keen on learning of the potential value and risks of opportunities such as sea-bed mining, off-shore fishing and other future off-shore economic activities.  We will ensure that a holistic approach is taken to policy development on our Exclusive Economic Zone.”

“The consultation aims to find out if the majority of Bermudians agree with a marine reserve and what size it should be,” explains Flook. “We talk about it possibly starting 50 miles from shore, but that is not yet decided. Most fishermen aren’t fishing past Argus Banks at 25 miles out. There are only two fishermen I know who fish past the 30-mile mark. So if the no-fishing zone started at 50 miles out, that gives fishermen a 25-mile buffer beyond where they are fishing now. It is not economically viable to go 50 miles or beyond to catch tuna or wahoo, which is why Bermudians don’t go that far.”

While most people seem receptive to the idea of a marine reserve, Hinton points out that public understanding of what the proposal entails and what the benefits would be is crucial. “Many people will remember the initial resistance there was to the fish-pot ban back in 1990,” she says. “Nowadays that is seen as a wonderful environmental model. We manage our fisheries better, and it is a win-win situation. When people say, what if we need to fish out there one day, to feed ourselves, I say if a time comes when you need those fish, there might not be any there if we don’t protect the stocks now.” Safeguarding these fisheries will not only ensure a legacy for future generations, it will increase the island’s profile as an eco-tourism destination, she added.

If the marine reserve gets the go-ahead, whether it begins 50 or 100 miles from the island’s coast (the size will be determined through the public consultation), it will likely be one of the largest marine reserves in the Atlantic Ocean. In fact, it will be one of the world’s largest marine sanctuaries, on a par with the reserves around the northwestern Hawaiian Islands and Britain’s Chagos Islands in the Indian Ocean. A legally established reserve would also demonstrate the Bermuda Government’s commitment to the international community in protecting a portion of the greater Sargasso Sea.

“We know that illegal fishing takes place within our EEZ,” says Flook. “Yachtsmen report that they see boats out there all the time, and we frequently find fishing gear washed up on our beaches of a kind never used by local fishermen—for example, trawling nets, buoys with Asian markings on them and long-line gear with stainless-steel hooks. The gear is in a good condition and has clearly not been in the water for long, so it has probably been lost fairly near Bermuda.”

Enforcement of a no-fishing zone in a vast area such as the one proposed will undoubtedly be a challenge, but before that challenge can be addressed, a legal framework needs to be
in place. For the local community, increasing public awareness may be the most effective way of encouraging compliance. Educating residents about the purpose and benefits of the reserve will help build community support and may result in self-policing. For illegal foreign vessels, enforcement will be much more complicated.

“Bermuda will only achieve effective enforcement if we have the appropriate legal tools,” stresses Flook. “Weak penalties or cumbersome processes will result in low compliance, so the legislation will have to be strong and nimble enough to be a deterrent.” Enforcement could combine a number of techniques, such as satellites to track and document offending vessels and strengthening partnerships with neighbouring countries in order to monitor the reserve better. “There are technologies in use already in other areas very similar to Bermuda’s proposed reserve that do work,” says Flook.

By creating a no-take marine reserve in part of its EEZ, Bermuda will establish itself as a leader in international marine conservation and be in a better position to convince other nations to protect the international waters of the Sargasso Sea. “We have absolutely no say in what happens out there in international waters,” explains Flook. “But if we take the step of creating a reserve in our own waters, the Sargasso Sea Alliance can say that Bermuda has done as much as it can locally, and that gives it the leverage to ask for more help from the international community to protect the rest of the Sargasso. In 1992, 193 countries got together in the United Nations and said they wanted to protect 10 percent of the world’s oceans by 2010. By 2010, they had achieved one-half of a percent; we are still at one-half of a percent. Now Bermuda is looking into creating the largest marine reserve in the Atlantic. That is a huge statement for a little country. We are walking the walk and talking the talk. It is really going to set the bar for others.”

More than a century ago, the world’s first great land park, Yellowstone National Park, was established in the western United States. Since that time, virtually every country on Earth has protected important sites on land for biological, cultural, geological, historic and scenic reasons. Unfortunately, conservation of our oceans has taken a profoundly different course, with a remarkably small area of the world’s oceans currently protected.

Global Ocean Legacy is working to change this by creating the first generation of the world’s great marine parks. A project of the Pew Environment Group, the conservation arm of the Pew Charitable Trusts, Global Ocean Legacy aims to protect and conserve the special places in our oceans before it is too late.

Since 2005, Global Ocean Legacy has been instrumental in securing the full protection of almost 1 million square kilometres (386,000 square miles) of the world’s most unique and spectacular seascapes. This includes more than half of the highly protected “no-take” marine reserves (areas where extractive activities are prohibited) that have been established.

Our work has been pivotal in the designation of some of the world’s largest ocean reserves, including the Papahanaumokuakea Marine National Monument in the northwestern Hawaiian Islands, Mariana Trench Marine National Monument in the Commonwealth of the Northern Mariana Islands, and the U.K.’s Chagos Marine Reserve in the Indian Ocean. Through close collaboration with local and national groups, indigenous communities, governments, scientists and others key partners, Global Ocean Legacy is working to establish very large, highly protected marine reserves in Australia’s Coral Sea and New Zealand’s Kermadecs, and is investigating additional sites in France, Chile and the United Kingdom, among others.

Just as national parks conserve our lands, highly protected, large marine reserves can help ensure ocean health for the future. Right here in Bermuda, we have an opportunity to do just that. Now is the time to protect the Earth’s last remaining healthy ocean ecosystems.