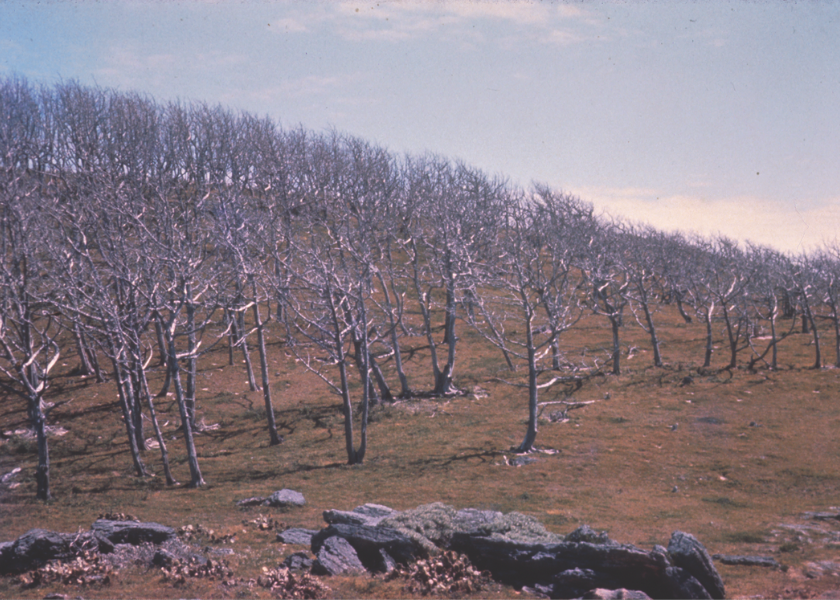 A Resilient Force: The Bermuda Cedar

Bermudians are very familiar with the Bermuda Cedar, Juniperus bermudiana, our remarkable endemic tree. The history of the Bermuda cedar is both tragic and beautiful: it has overcome unfathomable devastation, and has proven repeatedly that it’s an absolutely resilient force of nature. Here are five fascinating facts about the Bermuda Cedar:

1. Some of the first settlers on the island used every part of the Bermuda Cedar for survival. They used cedar berries for food and drink, as well as the timber for shipbuilding, houses, forts and furniture. The cedar also provided the necessary shade from the sun during the summer months and afforded protection from high winds, which frequently approach gale force in the winter months, both to houses and to the more tender plants such as fruit, vegetables and flowers. As a crucial part of the Bermudian livelihood, there were laws passed as early as 1700 that forbid exporting cedar.

2. Prior to the 1940s, locals had vivid memories of the hill sides, the valleys, the coated banks and the road sides being covered and flanked with healthy green cedar trees. Being the dominant tree, the cedar formed the background of the Bermudian landscape. Property owners took extreme care to preserve as many trees as possible. Just sufficient trees were felled to build houses and other buildings. Paths and driveways frequently made detours in order to save some good trees. This was the case until 1942, when a tiny scale insect known as the Juniper scale (Carulaspis viscid), only just visible to the naked eye, was accidentally imported from California. The cedar scale epidemic spread like wildfire through the trees, causing the death of 96% of the cedar population.

3. The devastation of the cedar forests was felt by all walks of life. The death of so many trees resulted in a large loss of nesting habitats for native bluebirds and other wildlife species. To combat the scale, over 100 natural insect predators were released in a major biological control programme. Additionally, in an effort to bring some of our forests back to their former splendor the Casuarina (whistling pine) from Australia was introduced. However, this species monopolized the island’s niches and became a pest species, taking over spaces where other trees might thrive. Casuarina also have very acidic needles, which drop under the tree and make the soil there unsuitable to be colonized by other plants.

4. Bermuda Cedars are an example of a plant with separate male and female individuals. This spring, as the trees flower and grow berries, you may notice the difference between male and female trees. Males carry the pollen, which can be seen in small, yellow, cone like flowers on the tips of the cedar’s needles. Female cedars also bloom with small flowers that the male’s pollen can stick to, via the tree’s usual pollination method – by wind. Female trees become unmistakable when they begin to grow the characteristic blue-purple berries eight months after pollination.

5. The Bermuda cedar is a slow grower and that’s part of the reason why it has taken them so long to return to their former glory. When grown from a seed or from seedlings, and in fertile soil and sheltered locations, trees can grow up to 50 feet (16 m) and may live for several hundred years. To plant, the ripe cedar berries should be collected and rubbed with sand paper to break the seed coat, then planted in potting mix, by loosely covering the seeds. Every effort should be made to keep our existing cedar trees healthy, as well as planting new ones to ensure future generations of Bermudians will know and appreciate the beauty and importance of the Bermuda Cedar!

When exploring local parks, nature reserves, and gardens be sure to look out for our native beauty, the Bermuda Cedar, and stand in awe of nature’s inspiring resilience.