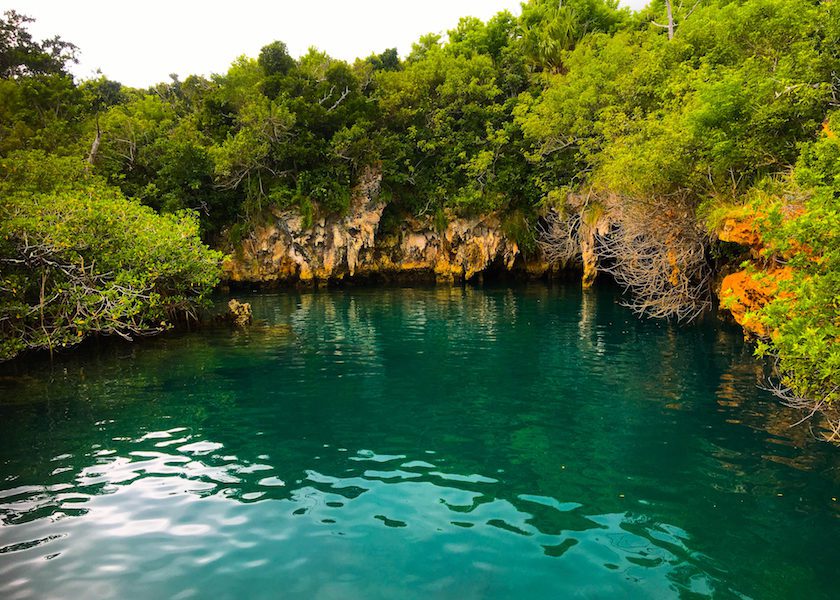 A Walk at Blue Hole Park

One of Bermuda’s most magical walks links the prosaically named Blue Hole Park with the Walsingham Nature Reserve in Hamilton Parish. It’s magical because its various pathways lead to hidden attractions and because while some of its trees (the poincianas, for example) are deciduous, the red mangrove thickets, olivewood and Surinam cherry trees are lush in winter.

Start the walk at the western end of the Causeway in Hamilton Parish where the park is signposted. The trail itself is half hidden. It begins by some palms to the right of the parking lot and leads into a small, shady thicket edged by the coppery leaves of a match-me-if-you-can bush. Elephant ears scrambling up casuarina trees, palms and palmettos give an exotic touch, a hint of jungle. The pathway leads to a narrow coastal road – Dolphin Drive, a reminder that once dolphin shows were held in a nearby lagoon. Turn right and red mangroves are immediately apparent on the left, their claw-like roots clutching the beach when the tide is out. Rocky outcrops reach into the water like dark brush marks in a Chinese painting.

Return to the road and turn right onto a grassy slope and you can see more red mangroves ringing a drowned sinkhole so densely you can only catch glimpses of the water. But in the fall and winter, birds such as herons, belted kingfishers and warblers are not always hidden. And even when they are, their calls are constant. Continue up Dolphin Drive and you’ll see a break in the hedge on the left, the clue to another of this park’s secrets. Walk through and you will see a cave’s entrance framed with stalactites resembling the petrified faces of ancient anteaters on a downward charge. Endemic maidenhair ferns grow out from the wet limestone. And all the while you can hear the constant drip after drip of falling water. Peer in and despite the darkness of the cave, you can see the pool inside is a rich deep blue.

Return to Dolphin Drive and keep walking until you come to a parting of the ways. For now, turn left and you will find a grassy field overlooking Castle Harbour and the airport beyond. Here are two more hidden attractions. Turn left and you’ll find two small caves, dark and deep.

At the far end of the field you’ll discover the blue hole after which this park is named. It’s a deep lagoon, more emerald than blue, home to a red mangrove thicket and once the venue of the dolphin displays. Tendrils of grey Spanish moss hang from the trees. A wooden deck allows you a close view of the water where parrot fish and sergeant majors seem to wait for food. Sometimes a barracuda slinks and skulks.  And on clear days, even in the winter, the mangroves and stalactites are perfectly mirrored in the pool.

Return to the crossway on Dolphin Drive and take the road not taken. It will take you on to another field where the woodland trail to Walsingham Jungle, as it is popularly known, begins. Surinam cherry trees form a shady bower over the footpath, sunlight filtering dappled patterns on their glossy leaves and on the pale, smooth bark of their slender trunks. The soil on the trail is red and hard and caked because it has been blown across by the jet stream from dust storms straight from Africa. The trail twists on, allowing occasional views of Castle Harbour on the left, with hints of more pools and holes on the right. Additional pathways offer diversions. William Zuill puts it this way in his Bermuda Journey: “There are dark caverns and wooded glens . . . and there is a miniature jungle, a snakeless Eden, traversed by indefinite paths which allow one to become fascinatingly and harmlessly lost.”

Towards the end of the trail comes an optional turning to the right. Take it and you will find an underwater cave. Return to the main trail, keep straight and you will come out on Walsingham Lane by Tom Moore’s Tavern, named after the Irish poet who spent some time in Bermuda earning more fame here for his poetry than he ever would in his native land. You will see a beautifully shaped hibiscus tree like a pink-flowered parasol. According to Andrew Dobson in his book A Birdwatching Guide to Bermuda, the red mangroves around the tavern are excellent for attracting “migrant warblers in the fall and holding warblers in the winter.” They are also good for cedar waxwings, American robins and Baltimore orioles.

Here, too, is an entrance to the Bermuda National Trust’s Idwal Hughes Nature Reserve where you can also see unusual rock formations, as well as Bermuda cedar and palmetto. Apparently the limestone found in the Walsingham area is the oldest in Bermuda, being about 800,000 years old and very hard. In addition, Walsingham is home to many of Bermuda’s rare endemic and native plants such as turkey berry, Bermuda bean, psilotum, roving sailor and rattle box.

Walsingham’s tidal lake, also surrounded by mangroves, is a step or so away and worth viewing for its teeming parrot fish and for barracuda.

Walsingham Lane leads on to Harrington Sound Road where you can pick up a bus either to the City of Hamilton or to St. George’s.

The larger, more dramatic Crystal and Fantasy Caves can be found on Wilkinson Avenue, which connects Harrington Sound Road with Blue Hole Hill. Two more caves can be seen at Grotto Bay Beach Resort, opposite Blue Hole Park. While exploring the caves, be careful not to slip as the stone is always wet and slippery. Please do not break off stalactites – they grow at the rate of one inch per 600 years. Wander away from the trail and you may find poison ivy.