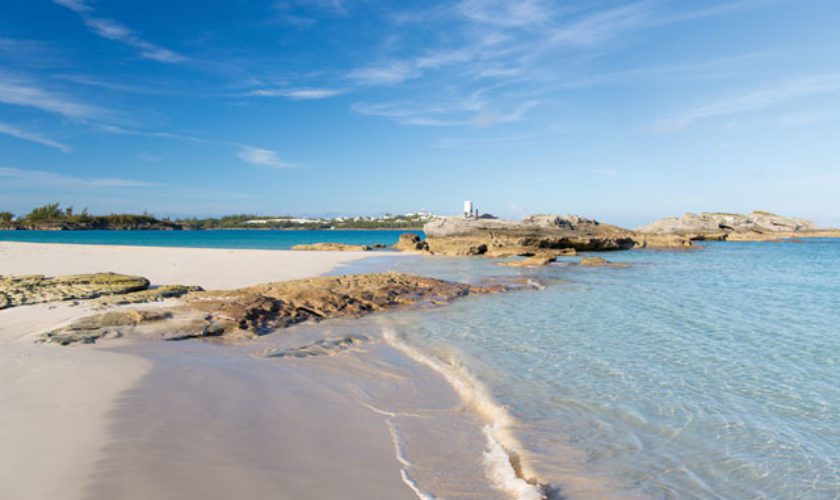 A Walk on Cooper’s Island

Clearwater Beach and Turtle Bay, part of Clearwater Beach Park, can be reached by motorised traffic (St David’s bus No 6). Once you reach the last car park opposite Turtle Bay, you will see the old gate that marked the entrance to the old tracking station. Today, it is a barrier against all traffic used by the public, which former conservation officer Dr. David Wingate is adamant should remain in place. As he said in the Royal Gazette, “That immediately separates those people who cannot bear to be separated from their cars from those who want to get into the wilderness. It is long enough out to the point so that people who really want and need wilderness can walk that far and leave the rest behind.”

Go through the gate, follow the road and you will soon come to the beautiful, sandy stretch of Long Bay which McCallan understandably maintained was the colony’s best bathing beach and which he described as being “danced on by ten thousand silver feet.”  Today, silver shoals of garfish and pompano can be seen glistening under the water.

Before the gate, however, opposite Clearwater, is a network of trails (also forbidden to traffic), marked at one point by the sign post “Cooper’s Island Nature Reserve Salt Marsh Trail and Boardwalk”, created in 2007. The extensive boardwalk over the restored salt marsh is an ideal spot for observing shore birds such as sandpipers, plovers and killdeer while the pond itself contains killifish endemic to Bermuda. A main trail in and out of woodland and grassy areas hugs the coastline, where warblers and indigo buntings can be seen in the fall and winter. It offers dramatic views of Nonsuch Island, striking for its green canopy, and the ruined forts of Castle Island dating back to the seventeenth century. A derelict building left by the base has been destroyed but a corrugated iron bunker on scrubby grass is a bit of flotsam from Cooper’s military past. Wild mimosa bushes are in profusion, recognisable by their long stamens that form airy pompoms and by their brown hanging seedpods. And dotted all over them are the vivid sky blue flowers of morning glory vines, which are scrambling in all directions—up the mimosa, the Brazilian pepper, the occasional cedar—and sometimes even climbing in and out of themselves. There was a time when this area had a profusion of wild flowers new to Bermuda, thanks to American planes landing on the nearby runway upon their return from Iraq or Somalia. American planes bringing supplies to both areas had to land on dirt airstrips. Earth and seeds became embedded in the tires of the undercarriages and then frozen as the planes took off and flew at high altitude. When some of the aircraft landed in Bermuda, the seeds thawed, fell off and took root. But now the emphasis is on removing invasive plants and trees and reintroducing and protecting the ones the settlers would have seen on their arrival. HSBC staff volunteers have planted cedars, palmetto and olivewood, which hopefully will dominate the invasive Brazilian pepper and casuarina. But wild flowers still abound—the purple flowers of bay bean can be seen, as well as the yellow-pea-like blossoms of Bermuda’s own bay bean. Other herbs and wild flowers include stiff verbena, daisy fleabane with lavender petals and a yellow centre, Jamaican vervain, apricot wireweed, and tufts of creeping day flower. Sprawling stands of prickly pear and Spanish bayonet add to the mix. Hopefully, the endemic Bermuda skink will thrive here as well as the land hermit crabs, which often use empty West Indian topshells for their protection.

Eventually, the path comes out by the marshland surrounding Well Bay, opposite Long Bay, beyond the main gate. Both beaches are excellent for swimming without any sudden shelves.  Walking on sand dunes (crisscrossed and bound by seaside morning glory vines) past the beaches, Fort Hill Bay and Soldier’s Bay on the right, and up to the hill, you can see the old tracking tower. Once, its search lights, crucial for tracking, impeded the possibility of green turtles returning to nest. But now it has been ingeniously converted into a little museum and wildlife watch tower. By happy coincidence a colony of endemic skinks was found just below the tower. With its panoramic ocean views, the tower’s open balcony is the ideal vantage point for watching the cahows (binoculars or telescope necessary) from October through March, and the more prolific Bermuda longtails swooping in arcs around the rocky islets from spring through summer. From March to June, it’s also ideal for watching the humpback whales pass our islands on their way to their northern feeding grounds in the US and Canada.  As you stand here on the balcony, the remoteness of Cooper’s Island is never more apparent. But it is not quite remote enough for Wingate. He would like to restore the watery gap between St. David’s and Cooper’s by dredging a channel. Cats and rats would then be prevented from swimming across and the whole area would be free of traffic. Wildlife would no longer be distracted by street lighting—green turtles might once again lay their eggs here and cahows nest.

“My dream,” he says, “is that Cooper’s Island be separated again.”