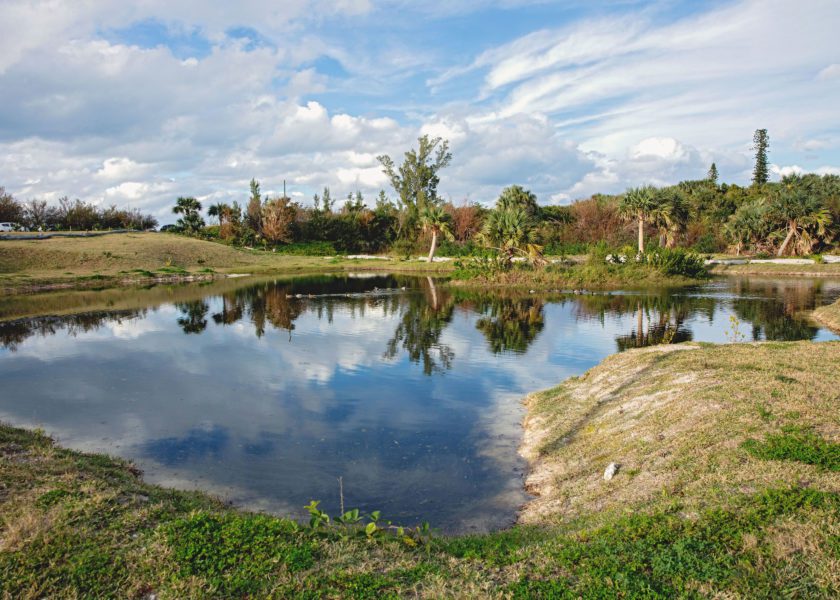 All About Eve’s Pond

Back in the spring of 2020, some commuters travelling to and from the east end may have noticed with consternation the sudden arrival of heavy construction equipment on a grassy and wooded area just west of Shelly Bay on the north shore. Did the digger portend yet another development swallowing more of our precious green space?

It is true that this 3.5- acre stretch of land was not particularly distinctive or beautiful, being overgrown with casuarinas and other invasive species. And it’s true, few people passing even knew its place name. But still, the idea of more development so close to the Railway Trail and scenic Shelly Bay Park was not an attractive prospect. As the work went on, thankfully it became clear that Island Construction’s move to the site was for a very different reason: to begin the transformation of this tract into a sanctuary or nature reserve to attract all kinds of wildlife. Since then, many of the invasives have been cleared and a scenic brackish pond has appeared, much to the delight of passers-by. Slowly, a wasteland is becoming a thing of beauty.

The project is thanks to Buy Back Bermuda, a joint initiative of the Bermuda Audubon Society and the Bermuda National Trust, which in its mission to save Bermuda’s few remaining open spaces for the benefit of the people of Bermuda and our wildlife, bought this 3.5 acreage in 2012. As Buy Back Bermuda well knows, the site has actually had a name since earliest times—Eve’s Pond. “Eve” was the name of a mariner’s family who lived in the nearby Somers Hall property during the eighteenth and nineteenth centuries. According to the Bermuda National Trust’s Hamilton Parish, in 1820 a Captain Edward Eve died there, leaving his wife Jane Ann with seven children. The house was renamed Blink Bonnie by Eugene Worrell Outerbridge II, who acquired it in 1925.

Until recently, the “pond” part of the name appeared to be misleading as no expanse of water, salt or otherwise, could be seen. But originally there most certainly was a visible inland saltwater pond: it used to rise and fall with the tide through Green Cave and connected caves under Harrington Sound. A.J. Savage clearly marked the body of water as Eve’s Pond on his map of 1898–1899. And according to Daniel Blagg’s Bermuda Gazetteer, in 1893 so many yellowtails swam through the underground passages into the pond that many suffocated. Jennifer Gray, chair of Buy Back Bermuda, former executive director of the Bermuda National Trust and president of the Bermuda Audubon Society, thinks this was entirely likely. When she was growing up, she saw yellowtails swarm in Harrington Sound for about three weeks, even though the Sound was not their usual habitat. Other fish would arrive in the pond as well. Eugene Outerbridge, former head of paediatrics, remembered young, small groupers arriving in the pond through the caves and staying there to become much larger. John Elliott Cooper, better known as “Shot” and the grandfather of The Bermudian’s managing editor, Gabrielle Boyer, also remembered groupers making their way into the pond at high tide. They would get stuck when the water receded and subsequently die. The family dog, Mickey, would then roll around on the dead groupers and, she says, “stink to high heaven for days.”

So why did the pond disappear? The Royal Gazette’s account of a special session held at the House of Assembly on November 24, 1939, gives the clue. Mr J.B. Outerbridge of Hamilton Parish requested information from Mr Trott of Smith’s Parish, then the chairman of the Board of Works, about whether mud would be pumped from Flatts Inlet to Harrington Sound. “I am of the opinion,” he said, “it is going to be detrimental to the fishing there, also to the scallops and oysters.” Mr Trott replied that they had been pumping sand into the area for some time, but he saw no evidence of sand going into Green Bay. He also said that Mr Mowbray (founding curator of the Aquarium) had shown where pumping should take place so that scallops and other fish wouldn’t be affected. In answer, Mr Outerbridge was skeptical, revealing his original question had been somewhat rhetorical. He replied that the area of marsh was then about twice the size of the pond they intended to fill in. “I should judge if they keep pumping there at the pond as he calls it, it will be three times the size of the pond they started to fill in.” Perhaps he had knowledge ahead of his time.

By 1941, when Eugene Worrall Outerbridge was still living at Somers Hall, growing lilies and running his Shelly Bay Supermarket in Pearman’s Hall, the pond was completely filled in with sand dredged from Flatts Inlet. It’s possible, ponds weren’t viewed then in the favourable light today’s environmentalists view them. Certainly, Eve’s Pond wasn’t the only one to be filled in during the first half of the twentieth century, as Pembroke Marsh attests. Filled-in land was seen as a means for dealing with trash and ponds were seen by some to be unsightly, in part because they attracted mosquitoes.

A large bird hide was constructed in September by Brown and Company, which was made possible by a donation from Eddie Wright in memory of his wife, Yvonne.

However, when Buy Back Bermuda bought the land some eighty years later, they knew from the start they wanted to reinstate the pond. A greater understanding of the natural world shows us water is essential for all living things. And, as Gray points out, it’s a huge attraction for immigrant birds as well as local ones. She was also originally in favour of the pond being connected to the sea, just as it had been in its original state. However, although Ocean Earth Team Technologies (OET), a team of international specialists who extensively researched and conducted geophysical mapping of the underground cave system, thought it was possible, the Buy Back Bermuda Nature Reserve Conservation Committee deemed it far too expensive and risky. “Green Cave is the longest, mapped cave in Bermuda,” Gray explains, “and the research OET carried out shows us that its connected chambers and uncharted caves are even more extensive than earlier explorations revealed.” It is vital to protect them since they are habitat to some of Bermuda’s rarest marine species. The pond has therefore been restored without being reconnected to the marine caves and is possibly east of the original although it’s difficult to be sure. No photos of the original pond have come to light.

“In March 2021,” Gray explains, “Mark Outerbridge from the Department of Environment and Natural Protection trapped 200 endemic Bermuda killifish from Trott’s Pond and acclimated them to fresher water so they could be introduced into Eve’s Pond. The majority of the introduced fish were female with some breeding-coloured males, so hopefully there will be fry soon. It’s no big surprise,” she adds, “that non-native gambusia—guppies—have also been seen in the pond, most likely introduced by visiting waterfowl. And we’ve been pleased to see the pond thriving with small aquatic insects and dragon flies.” Widgeon grass has been introduced and is flourishing.

Already the pond has proved a magnet to local and visiting birds, 55 different species having been recorded by local birders. They include all kinds of ducks, grebes, rails and gallinules, diverse shorebirds, including cormorants, herons, and ibis as well as cuckoos, kingfishers, falcons, flycatchers, vireos and nightjars. A large bird hide was constructed in September 2021 by Brown and Company. Its construction was made possible by a very generous gift from Eddie Wright in memory of his wife, Yvonne Wright.

Both Jennifer Gray and Myles Darrell, head of natural resources at the Bermuda National Trust, agree the process of removing invasive species, preparing the ground and conducting cave-mapping research was a mammoth task but was just the starting point for their conservation management plan. Excavated material was subsequently used to create a roadside berm to protect the reserve from prevailing winds and traffic noise and another to buffer the neighbouring condominium complex. And, as Darrell says, most important has been the planting of hundreds and hundreds of small plants both endemic and native. At least 25 species have been planted, including numerous cedars, olivewood, yellowwood, buttonwood and bay grape trees, as well as a range of plants, including Bermudianas and seaside purslane. Darrell was immensely grateful that Bermuda didn’t suffer a hurricane in 2021 as a severe storm could have devastated these young plants at a vulnerable stage of growth.

It’s difficult to imagine what the park will look like in the future. Right now, the pond and the surrounding grassy areas can easily be seen from the road. But that won’t always be the case once the trees gain maturity. “There’ll be a forest,” Darrell explains, “with a glade that can be a living classroom.” The grass will be knee high, attracting bees and butterflies, so that the effect will be wild rather than manicured. “Some humans might want pretty,” says Gray firmly, “but animals want wild.” So some areas will be restricted for wildlife while public walking trails (wheelchair accessible) will be established, including one up the steep southern hillside, the top of which allows vista views of the whole sanctuary and of the Staggs beyond Shelly Bay. In addition, benches and interpretive signage will add to visitors’ enjoyment. Visitors will park at Shelly Bay and walk along the Railway Trail to access the park. A crosswalk and traffic lights will make access safer.

Would-be visitors must wait at least until the official opening day, hopefully Earth Day, April 22, 2022. Until then, the team are waiting for the pond’s edges to stabilise and support more growth and biodiversity. “It’s like making sure your baby is healthy and strong before introducing it to the outside world,” says Gray.

To support the Buy Back Bermuda campaign, visit www.buybackbermuda.bm