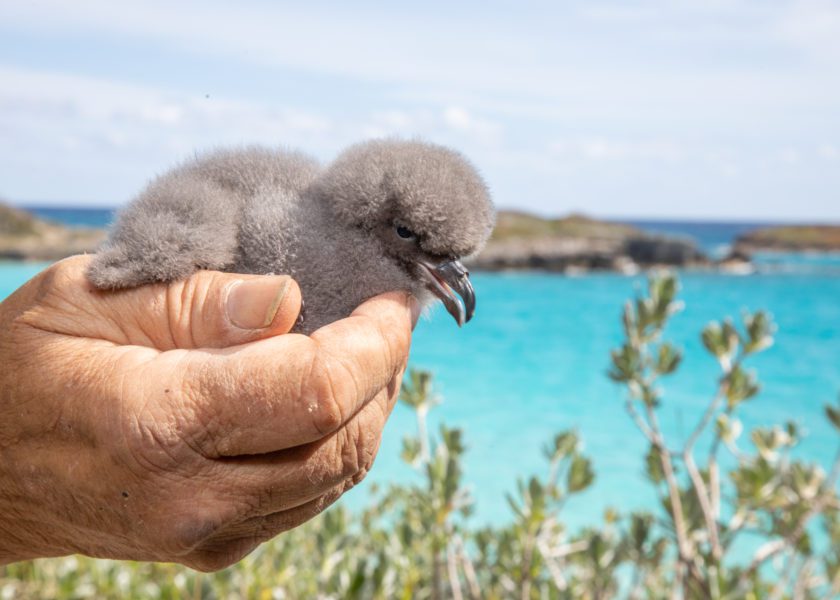 Back from the Brink—The Recovery of the Cahow

In a world where many species are at risk of extinction, the survival and recovery of the Bermuda petrel, more commonly known as the cahow, stands out as a global inspiration, providing a glimmer of hope in a time of great environmental upheaval.

Believed extinct for over 300 years, a tiny number of cahows were discovered in the 1950s “literally clinging on to these godforsaken islands,” says Jeremy Madeiros, Bermuda’s senior terrestrial conservation officer.

The cahow “changed our history,” he continues, recounting the story about Spanish and Portuguese mariners landing here in the early 1500s. “It was the noise cahows made that was one of the main factors why the Spanish never settled Bermuda. When night fell, the air was filled with this cacophony of moaning, growling, crying, mewing sounds. They thought the island was inhabited by devils.” Adding to this terrifying atmosphere, cahows are loudest on dark, moonless nights and fly extremely fast, so all these early mariners would have seen were quick-moving shadows. There were around half a million of these birds in existence at that time.

When the Spanish and Portuguese fled the “Isle of Devils,” they left their pigs behind which was the beginning of the end for the cahow, whose fate was finally sealed a hundred years later by the English, who added dogs, cats, rats and themselves to the seabird’s prey.

After a few suspected specimens appeared in the early 1900s, however, an expedition set out in January 1951 to discover whether or not cahows had really survived. Led by American ornithologist Dr Robert Cushman Murphy, along with Louis Mowbray, Bermuda Aquarium curator at the time, and a 15-year-old David Wingate, they found eight known pairs on four half-acre rocky islets off Cooper’s Island.

Wingate and his successor, Madeiros, have since dedicated their lives to the critically endangered cahow, one of the rarest seabirds on Earth and officially Bermuda’s national bird. In 1960 the Cahow Recovery Programme was established and through their care, research, knowledge and intuition, they have increased the number of breeding pairs from last year’s record of 143, to 155 for the 2021/2022 breeding season.

Initially, the programme’s priority was to manage threats and eliminate anything that could prevent successful breeding. Because cahows nest in deep underground burrows, this included the creation of artificial concrete nests. The programme was a success, but by the late 1990s their tiny island homes began to succumb to a new threat: climate change and, with it, rising seas and stronger storms. “The dream was you could eventually get the birds nesting back on Nonsuch or one of the other bigger islands,” says Madeiros. “At least three of the four original islands are not going to be usable by the 2050s.”

When Hurricane Fabian damaged or destroyed over 80 percent of the concrete burrows, the situation became critical. “I had five weeks to repair the nests before the return of the birds for the next season. On one island, the whole centre of the island had collapsed.”

After taking over the programme in 2000, Madeiros learned about translocation from an Australian biologist, Nicholas Carlile, who had achieved this with the Gould’s petrel in New South Wales. The process involves monitoring the chicks’ development, moving them to artificial burrows at the new nesting site a few weeks before fledging, and then taking over as their parents. They need to be fed daily, weighed and measured. When they start coming out at night to exercise their wings, roughly a week before fledging, that’s when they orient and imprint on that spot.

After training in Australia, Madeiros returned to Bermuda to begin but ran into opposition due to Wingate’s strict no-handling policy. The devastating consequences of Hurricane Fabian, however, changed things and they couldn’t afford not to do it. In 2004, Jeremy and his team moved 14 chicks. “It was a huge gamble,” remembers Madeiros. “There were sleepless nights.”

Once the cahow fledges out to sea it takes three to four years for the males to return and four to six years for the females, so Madeiros had many sleepless nights. Then, one night in February 2008, he went out to Nonsuch to fix the solar-powered sound attraction system they had installed. “All of a sudden a cahow came in and made very low calls over me, then another joined it and within half an hour there were five or six of them flying over. I started getting really excited.

“The first bird landed only 10 feet away from me. They will generally go for the highest point to climb up to look around and get their bearings and I was the highest point. It came over, looked at me, then climbed up onto my lap.” Madeiros had put bands on the left legs of the translocated birds, so he knew instantly his experiment had worked. “I think I was whooping louder than the cahows that night!”

When the first chick hatched on Nonsuch in 2009, it was called Somers.

November is nesting season when the cahow pairs return to their burrows for nest building, courtship and mating. They head back to sea to feed during December. The females return in early January to lay their single egg. The eggs are incubated by both parents and start to hatch around March. Much of this process can now be viewed in real time via three CahowCams, two of which are installed inside a nest. This has also helped the team learn more about the species because they can watch the birds, undisturbed, in their pitch-black burrows.

Describing himself as someone who looks for and develops “technology solutions to conservation challenges,” Rouja created the first CahowCam by hacking a GoPro to make it infrared sensitive so it could be powered and produce video output around the clock. Upgraded versions have been streaming live footage from Nonsuch since 2013. The CahowCam proved an instant success, and its reach took off when the team partnered with the Cornell Lab of Ornithology in the US which has two million followers. Since then, over 40 million minutes of CahowCam footage has been watched in over one hundred countries around the world.

“To say it’s been successful beyond my wildest dreams is an understatement,” says Madeiros. “We’ve had people from Japan, China, South Africa, who have alerted us to different things that were happening in the burrow, so it’s now moved into the whole region of citizen science.”

“The average feeding trip is 2,500 to 3,500 miles with an extreme case being logged at 10,000 miles,” says Madeiros. “We’ve tracked birds right up to the edge of the Nova Scotia shelf, out to the Grand Banks, half-way across the Atlantic to the mid-Atlantic ridge, close to the Azores and then back. That’s to feed the chick once.”

Madeiros believes that when Bermuda has 1,000 breeding pairs, the cahow will no longer be critically endangered; however, the threats to their nesting sites will never go away. “This is a species that we need to continue management of for the foreseeable future,” he says.

He anticipates reaching the 1,000-pair goal by around 2050 and his primary consideration now is “identifying the next generation of caretakers to keep this project going.”