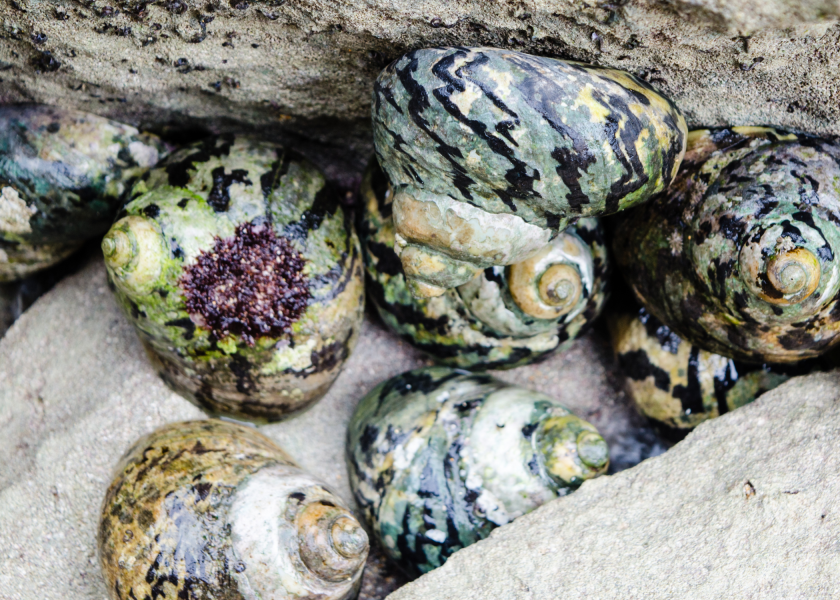 Endemic to Bermuda, the West Indian Topshell is a large marine snail that lives on rocky shoreline on the South Shore and in the east end. This species is legally protected in Bermuda and should never be collected dead or alive.

1. The West Indian Topshell is the largest of the species inhabiting Bermuda’s rocky shore line. Some shells reach up to 15cm in diameter.

2. This snail is known as “wilk” or “wilks” (or sometimes as “whelks”) in the English-speaking Caribbean islands of the West Indies or sometimes referred to as the magpie shell, due to its black and white exterior.

3. This large snail was a popular food item among early settlers to the island as they could be collected easily at low tide – because of this, the West Indian Topshell became extripated or locally extinct. This had a serious impact on the Land Hermit Crab population, as they rely on empty Topshell shells for shelter.

4. In 1982 Topshells were re-introduced to Bermuda at Nonsuch Island, and they have spread westward along the South Shore.

5. The west Indian top shell is known to be an herbivore, feeding on a large variety of algae. They actively scrape the algal growths off rocks, and this tends to lead to erosion over time.[7] Feeding commonly occurs during the nocturnal period, when the snails are most active.

6. The West Indian Topshell is considered to be the third most economically important invertebrate species in the Caribbean, after the spiny lobster and the queen conch . It has gone locally extinct in some habitats due to overfishing and overexploitation. Bermuda is the only country where it is 100% illegal to collect West Indian Top Shells.