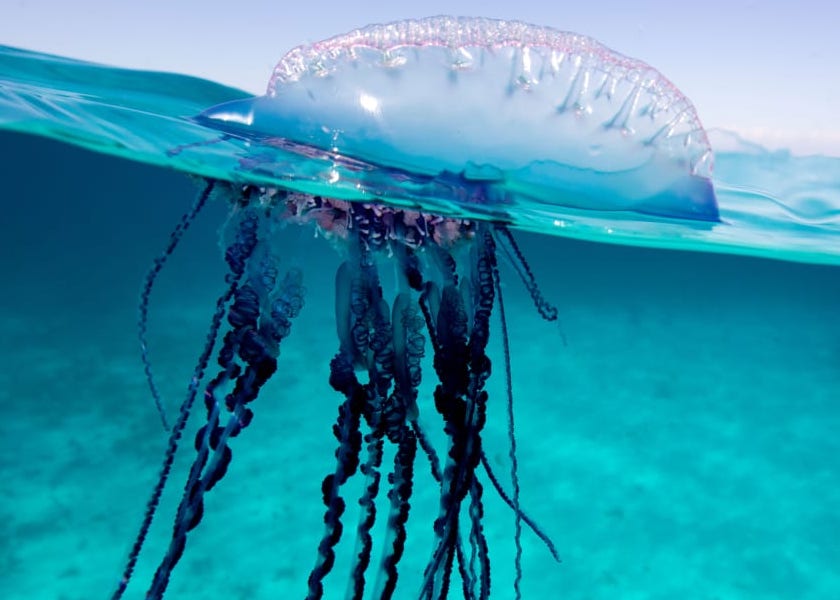 Where can you spot them? Anywhere on the surface of the ocean in Bermuda. If you see one, get out of the water immediately, as their tentacles can reach far further than you may think. You may also see them washed up on the beach, but be careful because they can still sting out of the water.

1. The man o’ war is a colonial organism – an animal that’s made up of many smaller animals working together. A man o’ war is made up of specialized polyps that could not survive individually, and function as one animal.

2. The name comes from the name for an eighteenth century artillery ship, which the animal resembles in full sail.

3. Man o’ wars have no means of propulsion, and are ruled entirely by currents and tides.

4. The man o’ war’s balloon above the surface is filled with carbon monoxide, nitrogen, oxygen and argon. If an aerial attack is made, the balloon can be deflated via its siphon to temporarily submerge the colony to safety.

5. The different types of polyps that make up a man o’ war are for defense, reproduction, and feeding. The defensive polyps make up the stinging tentacles, which can be up to 30m in length. These bear venomous nematocysts, which have the power to paralyze and kill fish and squid. The prey is then transferred to the digestive polyps.

6. The man o’ war has few predators because of its stinging cells. These include some turtles, whose skin is too thick to be affected by stings, and a type of sea slug that is immune to the nematocysts.

7. Man o’ war are dangerous to humans, causing very painful stings. In certain cases, if allergic reaction occurs, they can even be fatal.