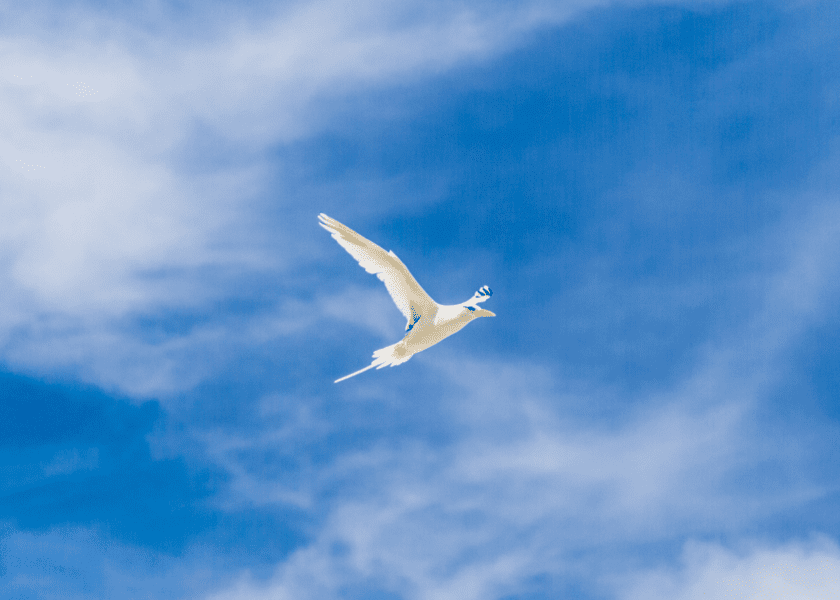 Where can you spot them? In the skies above Bermuda’s coasts. Their nests can also be seen in crevices in coastal rock faces throughout the island in the breeding season.

1. Longtails are open-ocean birds that only come to land to breed.

2. Longtails mate for life, and participate in spectacular aerial courtship displays, which can be seen in Bermuda’s skies in April.

3. Each parent alternates between incubating the egg and hunting in the open ocean. When the egg hatches, the parents alternate between minding the chick and bringing food back for it.

4. Longtails spend so much time on the wing that their legs are now almost useless on land.

5. Longtails are the only seabird that nests in significant numbers on Bermuda’s cliffs.

6. Pigeons compete for coastal nesting sites with long tails, though they are often thought of as a city-dwelling bird.

7. You can get a closer look at long tails by peeking into their nesting sites from around May until September. Longtails nest high up on sea cliffs, and many are accessible with a bit of rock climbing along south shore beaches like Horseshoe Bay and Warwick Long Bay – but remember to be respectful and not disturb the nests.

8. You can help longtails by installing longtail igloos to create more nesting sites for them. Instructions for how to do this can be found here.