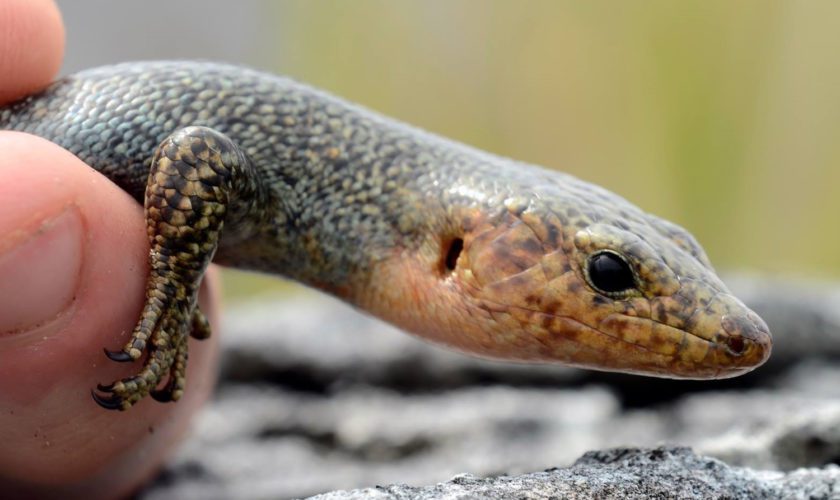 Where can you spot them? Skinks favour rocky habitats and can be found on isolated rocky shorelines. Most of the population lives in Spittal Pond and on the Castle Harbour islands.

1. Skinks are our only endemic reptile. On oceanic islands, it is rare for land-dwelling endemic animals to
develop, and the skink is a living reminder of tremendous evolutionary effort.

2. Skinks face many threats, including the loss of natural habitat due to urban development, predation by introduced species such as cats, rats, and kiskadees, and entrapment in litter.

3. Juvenile skinks are lighter in colour than adults, and have stripes running along their bodies that fade over time. They also have bright blue tails, which they can shed and regenerate in order to distract predators as they make an escape.

4. Their diet consists of small insects, such as crickets and beetles, and coastal crustaceans. Skinks that come in to contact with humans are also partial to cheddar cheese.

5. Skinks can burrow in soil and sand with their robust claws, which helps them to forage for food and hide from predators.

6. Skinks are more active during the summer, but do not hibernate because Bermuda is warm enough to support the reptiles year round.

7. The Bermuda skink has claws on its feet, but no friction pads, making them suited to low-lying rocky habitats, and not the woodland habitats occupied by Bermudian anole lizards. This also means that they cannot escape easily if they fall down a slippery surface. Skinks have died by getting trapped in discarded glass bottles, as they are unable to climb out.

8. Mating occurs between April and May, and females stay with the eggs for 6-7 weeks. When they hatch, the female chases the young skinks away, probably in an effort to encourage them to colonize new territories.