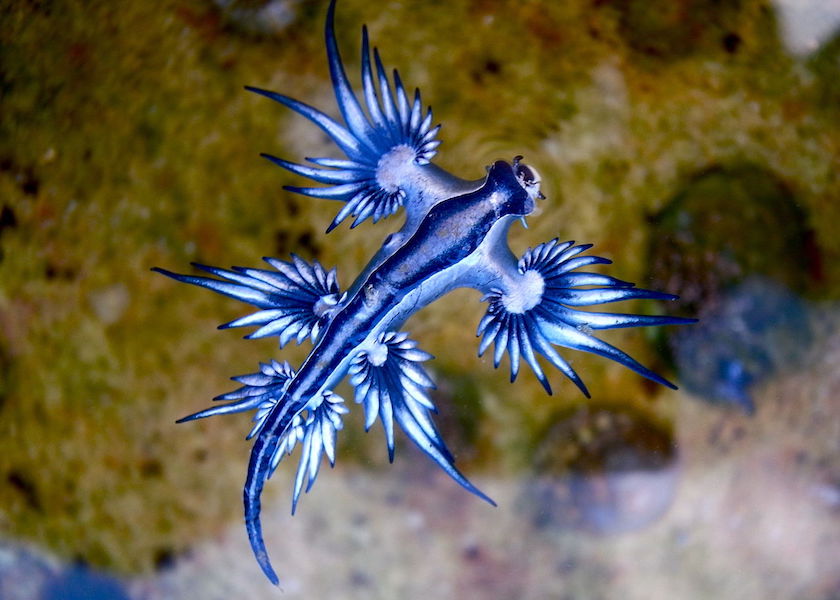 Even the name of this little high seas traveller inspires interest, and recalls fantastical tales of the mysterious Bermuda triangle. Far from the size of a folkloric dragon, the blue dragon (Glaucus atlanticus) is only about 3 centimetres long. However, it packs a punch as large as the fabled monster, and is as beautiful as it is resourceful.

“First described in 1763 as a ‘marine insect,’ it was later declared to be the baby stage of the Angel Shark – actually not such bad guesses when you compare it with a real marine insect, and a juvenile flying fish” – Wolfgang Sterrer, Bermuda’s Marine Life

Nudibranch simply means “naked lung” referencing the curious external appendages nudibranchs possess instead of gills. Some appear to be wearing a tentacled crown atop their heads, which is their gill system. The blue dragon has winglike appendages for this purpose called cerata. All nudibranchs are mollusks,  but they shed their shells early on in development, and they all appear bilaterally symmetrical. Here are 6 facts about nudibranchs you probably don’t already know!

1. You won’t see this little creature inshore – they are light enough to float near the top of the ocean, suspended in the surface tension of the water, and they spend their whole lives in offshore oceans, carried along by sea currents.

2. The blue dragon feeds on the Portuguese Man O’ War. Very few creatures can withstand the Man O’ War’s venomous sting, among them the Man O’ War fish and the blue dragon. It also feeds on other pelagic organisms, the by-the-wind-sailor, and blue button, both jellyfish-like animals, and the violet snail.

3. This little sea slug stores stinging cells from the Man O’ Wars it eats in its own tissues as a form of self-defence. They can produce a wicked sting dangerous to humans.

4. The beautiful sea slug looks like a bright blue jewel, with three pairs of wing-like cerata branching off of its body. Though diminutive, the cerata can be used to propel the blue dragon slowly through the water.

5. Blue dragons have both male and female reproductive organs, though they cannot fertilise their own eggs, and must reproduce sexually. Pelagic life means that there are few stable surfaces to lay eggs on, and they attach their fertilised eggs to floating carcasses, or sargassum.

6. A few years ago, Weldon Wade, a commercial diver in Bermuda, found some blue dragons washed inshore at Spittle Pond, likely blown in by a storm. They are also able to be seen far offshore, near jellyfish or sargassum.