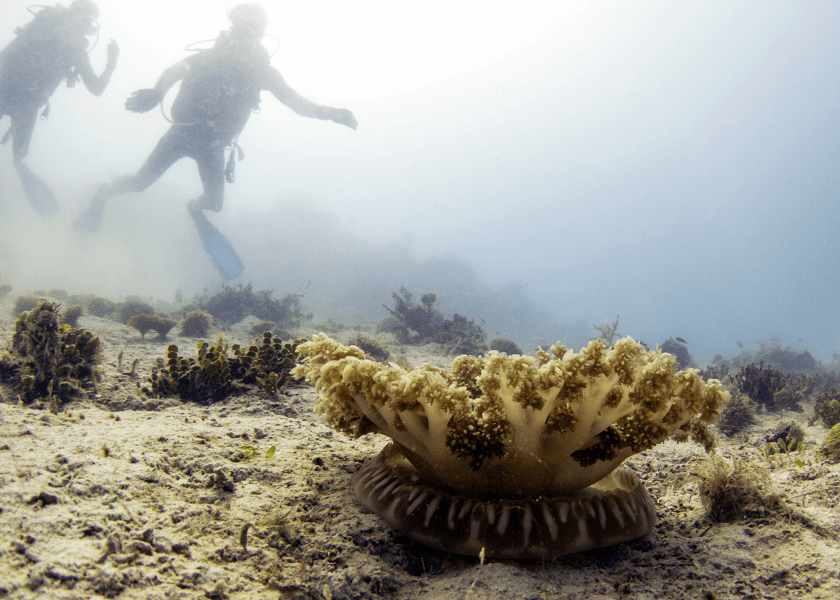 Also known as the upside-down jellyfish or mangrove jelly, this strange creature is very different from the average jellyfish. Here are 7 facts about the Cassiopeia jellyfish you probably don’t already know.

1. While most jellies drift with the current, their tentacles pointed downward, this striking jelly lies on its bell on the seafloor. The bell of the adult jelly is concave acting like a suction cup to adhere to the ocean bottom and it is sedentary throughout the majority of its lifecycle.

2. Their coloration can range from gray-blue to green and they are often found in groups.

3. They prefer a habitat with a shallow, muddy bottom, so these jellies can be found in brackish ponds, inshore bays, and mangroves. In Bermuda, they can be seen at Walsingham Pond, Harrington Sound, Waterville, or the lagoon at Paget Island.

4. Upside-down jellyfish have the ability to sting humans, but it isn’t very poisonous or deadly. Though their stings are mild, research shows that excessive exposure may be detrimental to humans. In addition to direct stings, indirect stings have also been reported from swimming amongst their habitat.

5. The primary subset of their diet is from the symbiotic relationship with plankton that reside in the underside of the bell and require sunlight in order to photosynthesize nutrients for the organism. This allows the upside-down jellyfish to easily access organic nutrients. Not only acting as food, the symbiotic algae living in the jellyfish’s body produces oxygen, allowing the jellyfish to survive in oxygen-poor water.